Leaders are asking Russian speakers in Germany not to heed "the cynical and trivializing disinformation campagin led by Russian state media." The statement came a day after a pro-Russian rally in Berlin. 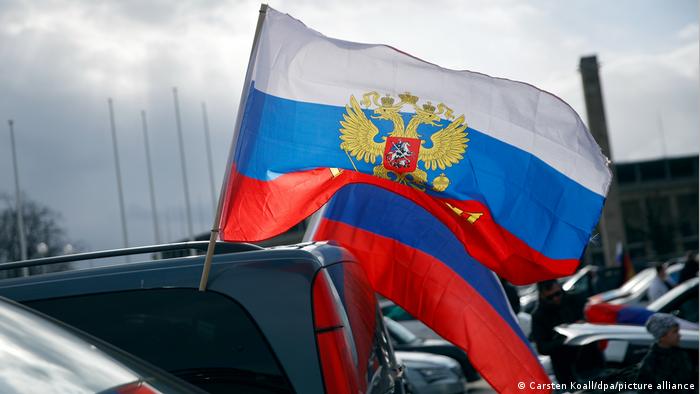 The federal government has warned German residents with roots in Russia not to fall for propaganda, as the Kremlin disinformation machine kicks into overdrive amidst the ongoing war in Ukraine.

Deputy spokesman Wolfgang Büchner said that Chancellor Olaf Scholz’s government "implores Russian-speaking people in Germany to inform themselves comprehensively with national and international media," to avoid falling prey to false narratives about what is happening in Ukraine.

Across social media and on Russian national outlets, Kremlin claims, such as that the killing of civilians in Mariupol and Bucha had been staged, have become widespread.

Stories about people with Russian roots abroad being targeted by xenophobic attacks may also be exaggerations pushed by the Kremlin, the government warned.

"No one should give credence to the cynical and trivializing disinformation campaign led by Russian state media," Büchner said.

Büchner spoke a day after some 900 people took part in a car parade throughout Berlin, brandishing Russian flags and protesting what they called anti-Russian discrimination in the community.

"This is [Russian President Vladimir] Putin's war," the government spokesman said. "Not a war of the Russian or Ukrainian people. Germany's intelligence services are being very vigilant in this case."

Estimates vary drastically, often based on whether trying to count people whose first language is Russian or people who can speak Russian, but between 3 and 6 million Russian speakers are thought to live in Germany. As of 2019, roughly 3.5 million German residents had migrated from former Soviet states including Russia, Ukraine and Kazakhstan.