Federal police have said that politicaly motivated vandalism and assault were on the rise. However, officials warned that false reports of xenophobic attacks could also be part of a Russian disinformation campaign. 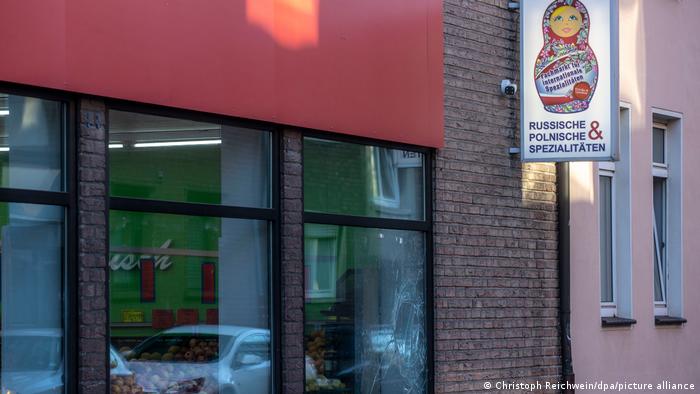 A Russian-Polish grocery store had its windows broken by vandals

Germany's Federal Criminal Police Office (BKA) said on Wednesday that it had registered at least 500 reports of politically motivated attacks on the Russian and Ukrainian communities in Germany since Moscow began the assault on its neighbor in February. These attacks include harassment, threats, verbal assaults and vandalism, but in some cases have also turned more violent.

For example, someone threw bottles at the windows of a Russian Orthodox church in the Berlin neighborhood of Charlottenburg overnight. The church is being used an emergency shelter for Ukrainian refugees. In the capital's Marzahn neighborhood, someone tried to set fire to a Russian-German school.

In the western city of Krefeld, a Ukrainian refugee family's car was burned. And not too far away in Bonn,another Russian school reported being targeted by harassing phone calls and the city's Russian consulate was sent a hoax anthrax letter. Earlier in March, a Russian grocery store in Oberhausen had its windows broken and vandalized.

The BKA noted that while some incidents involved Ukrainians, the vast majority of the reports related to Russians in Germany.

While the German Interior Ministry, which oversees the BKA, did not want to diminish the uptick in xenophobic attacks, a spokesman warned that some of the reports could be the result of Russian disinformation networks. Going all the way back to the Cold War, he said, Russian agents have promoted the idea that ethnic Russians living in Western countries are a major target for xenophobic violence.

"The alleged hostility against Russians could be an endeavor," to distract from Russian violence and be part of a campaign to "defame criticism [of Moscow] as irrational," the spokesman said. The Kremlin is attempting to construe Western sanctions as pure xenophobia and "distract from its unjustified war in Ukraine."

At the same time, individual reports of harassment for perceived Russian ties from restaurants, churches, and cultural centers in Western countries such as the US, UK, and Canada, were also on the rise.