Angela Merkel's government presented its long-awaited draft immigration law to the Bundestag — and got plenty of criticism from all political sides in return. Reforms to attract skilled workers aren't enough for some.

Making it in Germany

In a heated debate in the Bundestag on Thursday, the German government made the case for its much discussed proposed law governing immigration for skilled workers.

The new proposal, initially agreed upon by Angela Merkel's Cabinet five months ago, is the government's response to many years of complaints from a business community increasingly concerned about the lack of qualified IT specialists and engineers in Germany and shortfalls in other vocational professions. The country's aging population is also desperately in need of health care workers.

Conservative Interior Minister Horst Seehofer was on hand to present the draft law. He described it as a "historic point of juncture" that provided clear criteria for who should be able to come to Germany to work and under what conditions.

The minister was careful to point out that any perceived liberalization of Germany's immigration laws could easily be corrected in the future, should the job-market situation change.

One of the key planks of the proposed law is the suspension of a mandatory check accompanying all job applications from outside the EU that makes sure there are no German or EU citizen applicants, who have priority.

The law will also make it easier for immigrants with a vocational qualification to move to Germany. Up until now, the German system had mainly favored those with academic qualifications.

Additionally it will also allow some people, under certain circumstances, to come to Germany to seek vocational training. 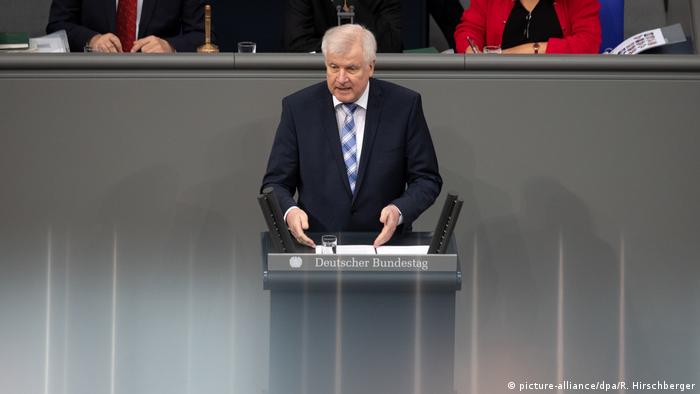 Interior Minister Seehofer said the law would be 'historic'

The opposition criticized the limited scope of the plan, while the government's conservative faction in the Bundestag stressed in a statement that there must be "no immigration into the social security systems."

The German labor minister, Hubertus Heil, also defended another migration law proposed by the government that modifies how certain asylum-seekers whose applications have been rejected can obtain a "tolerated" status, meaning they are nonetheless allowed to stay in the country. The modifications apply to rejected asylum-seekers who have begun a state-recognized vocational training course or work for at least 20 hours a week, learned German, and have been able to support themselves for 18 months already.

Heil defended the move as a "pragmatic solution," arguing it made no sense to deport people who were already working in Germany while at the same time trying to encourage other skilled workers to come.

But some experts did not think much of the idea.

"It is much too restrictive to make much sense," Thomas Gross, immigration law professor at Osnabrück University, said of the toleration article. "There are a few former refugees whose status hasn't been recognized. They will get a more long-term 'toleration status' under very tight restrictions. But that isn't a residency permit, but a second-class, uncertain status, and it will only be relevant for very few people."

Gross was similarly unimpressed with draft law on general immigration. "It's certainly a compromise that offers access and progress for those with non-academic professions with training qualifications," the professor told DW. "But for all other areas it brings practically no progress."

Attacks from all sides

The government, made up of Angela Merkel's center-right Christian Democrats and its Bavarian sister party, the CSU, and the center-left Social Democrats, was bombarded from both sides of the parliament during the debate.

The business-friendly Free Democrats, represented by Linda Teuteberg, dismissed the draft law as "tentative and uninspired" and said it offered no great progress.

Green party parliamentary leader Katrin Göring-Eckardt said the proposal was more of an "obstruction law" rather than a modern immigration law, a line that was also taken by the socialist Left party.

The exact opposite argument was made by Gottfried Curio, a representative from the far-right, anti-immigration Alternative for Germany (AfD), who said the proposed law would only attract more "underqualified poverty migration." 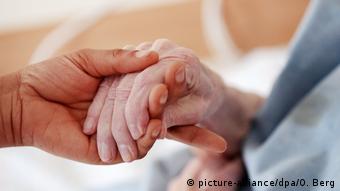 Germany is facing a care-worker crisis

Human rights organizations like Pro Asyl also argued that the draft law was orientated more towards Germany's economic interests and would help very few asylum-seekers who were trying to integrate in Germany.

Bettina Offer, an immigration lawyer who represents major German companies looking for employees abroad, said it was unrealistic to expect the government to completely overhaul Germany's immigration law in anything less than three to five years. According to her, what the government had done was ease the most critical points in the current legal situation.

"They wanted a quick solution because skilled workers were needed quickly, and I think that made sense," Offer said. "That has been improved, but it's true that the new law only offers a very rough framework, which I think will be refined in the next few years."

"But what is perhaps even more important for the skilled workers is that the government has understood that the bottleneck is not so much at the legal level, but at the bureaucratic and administrative level," she added.

In other words, it's the practical problems that deter many qualified people from coming to Germany, such as difficulties getting visa appointments, either in Germany's Foreign Citizen Offices or in consulates abroad.

"The new law includes a fast-tracked procedure for qualified workers. Businesses have been calling for that a long time, and that has finally been heard," said Offer.

The law is supposed to come into effect on January 1, 2020, though the government has also warned that the relevant bureaucracies will need a six-month preparation period, which would mean the parliament would have to pass the law this summer to have an effect.

The German government has moved closer to passing a long-awaited law lifting obstacles to skilled labor from around the world. Businesses say Germany could benefit from nationalist policies in the US and the UK. (19.12.2018)