Germany aims to revamp crisis-hit care industry amid worker shortage | Germany | News and in-depth reporting from Berlin and beyond | DW | 28.01.2019

The German government has come up with a plan to get the country out of its care worker crisis: find 10 percent more trainees by 2023. But experts say the effort will only be effective if working conditions improve. 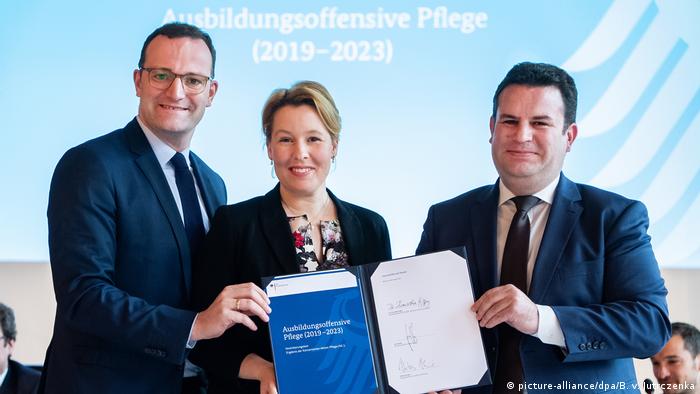 The German government is pushing hard to make care work an attractive career prospect. As Spahn put it: "Today it's clear if a young person goes to their parents and says: 'father, mother, I want to become a care worker,' then a lot of them would say, 'oh God, how do we talk them out of it.' Because the image out there is of work conditions that really are difficult."

The aim, the minister said, is for parents to say "in good conscience," "yes, good choice, we want to support you." To this end, the three ministers ceremonially signed a pledge to carry out 111 "concrete measures" to make care work training worth the effort, before the press and representatives from close to 40 interest groups and industry associations. These measures, to be in place by January 1, 2020, include introducing new training courses, scrapping training fees, and an advertising campaign. The target, or the "magic number" as Family Minister Giffey called it, is to create 10 percent more trainees by 2023.

The issue is particularly urgent in Germany, where the number of people who need care is expected to rise exponentially in the coming decades: from the 3.3 million counted in 2017, to 4 million by 2030, and 5.3 million by 2050, according to official government projections.

The cost for helping all these extra people will have to be financed by a corresponding rise in national insurance contributions among German workers, amounting to an extra €550 ($630) per year for those on an average income, as a recent study calculated.

Meanwhile, morale in the care work industry is low. A survey released in mid-January found that 74 percent of care workers, care receivers and their relatives, and doctors felt that care work was only of minor relevance in German politics.

This was evidence of the growing "skepticism" about the political will to find a solution, according to Franz Wagner, president of the German care work council (DPR), which represents several industry associations.

The DPR has demanded that the government create 100,000 new care work jobs, and Spahn and his colleagues are at least paying lip service to the call: the Health Ministry has promised to create 13,000 jobs this year. But that is only half the problem, because the industry is struggling to fill the posts that are on offer now: some 38,000 skilled care work jobs remain open, and for every 100 unfilled posts, there are only 26 unemployed skilled workers on the market.

This is why Wagner thinks only half the battle has been fought. The KAP is "a very important milestone," Wagner told DW at Monday's event, but he warned that what is still missing is an overarching strategy that goes beyond 2023.

"We need better organization, different leaders, a different status for care work in the system: so recognition of the skills of care workers, and de-bureaucratization," he said. "If we don't change the conditions then we won't reach the goal with more training, because the trainees will notice during their training that this job isn't that attractive."

Wagner was also alert to the dangers of a "brain drain" in Central and Eastern Europe, where Germany is currently recruiting many workers.

"We will certainly have to look for carers abroad," he said. "But just like German care workers, these people will want good founding conditions. I would warn against exporting German training abroad, because our training isn't necessarily adaptable. We can't just take well-qualified people away. We have a moral responsibility not to exploit other people or other countries just because we can't manage to train our own people."

The German government has announced 13,000 more jobs for hospitals and care homes, but there is still a shortage of qualified medical staff. DW spent a shift with two nurses to learn more about the care sector crisis. (01.08.2018)