Angela Merkel's government has been criticized for failing to regulate the private care market, leaving the door open to off-the-books labor by health workers. There is also a major shortage of caregivers nationwide. 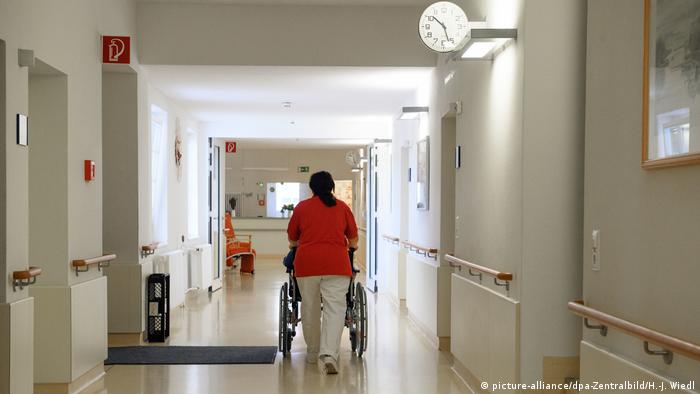 Germany's caregiver shortage has not only led to understaffing at residential facilities for elderly people, but also means that patients are unable to get at-home health care without navigating a sector plagued by "legal gray zones" — such as a lack of standardized contracts covering hours, wages and labor conditions — that discourage on-the-books work.

There are currently about 36,000 vacant posts for nurses, therapists, attendants and other care workers; a full 15,000 of these are for people who specialize in assisting the elderly. Germany's population is rapidly aging, which adds to the urgency: The number of people requiring eldercare services has been forecast to rise from the current 2.86 million to 4.5 million by 2060. 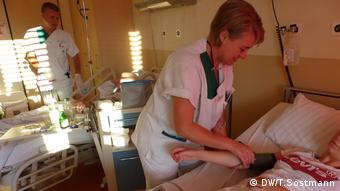 There are hundreds of thousands Eastern European care workers in Germany

Chancellor Angela Merkel's government is working to address the problem. The Health, Family, and Labor Ministries launched a joint initiative in July to recruit an extra 13,000 workers as soon as possible, and ease working conditions for professional caregivers. But an organization called the German-Polish Centre for Public Law and Environmental Network has called on the government to do more.

"Where are you going to get these skilled workers from?" said Lothar Knopp, the director of the GPPLEN, which was founded in 2009 by Germany's Brandenburg University of Technology and Poland's University of Wroclaw.

Read more: 'Who will look after us?' Germany's ailing care system

Though the current plans would staff state facilities, according to Knopp, the government's initiative "offers no breakthrough at all for home care."

One significant problem for people looking for such assistance is price, but the German government has so failed to either increase care benefits, or to offer extra tax exemptions for people in need. "Politicians need to finally make financial mechanisms available so that home care can be made affordable," Knopp said.

At Tuesday's press conference, Promedica Plus CEO Daniel Haberkorn said the home-care model "helps between 250,000 and 300,000 senior citizens to live at home, and it helps many people in Eastern Europe, where they might not find a job, to earn €1,500 ($1700) a month," he said. The average monthly gross salary in Poland is just over €1,000 a month.

Haberkorn went on to acknowledge that that such a system would remove health workers from Poland, but the company's Polish head, Robert Szymczak, claimed that pensions are so low that old people simply can't afford care, and said Poland had no social benefits covering care.

"It's a tradition that you have your grandma or grandpa move in, and you try to integrate your working life with your private life," Szymczak told DW. "We're talking about a shortfall in Germany, but in Poland the issue doesn't even exist at all. There are no debates about it."

A Polish government report published in 2014, however, showed that the country could face a problem similar to Germany's in the next few years: An aging population and a lack of care personnel.

In Germany, the labor shortage was deemed serious enough to warrant a visit by Chancellor Merkel to a care home in the city of Paderborn last month. The care industry has developed a reputation for overwork and low pay, which has made recruitment very difficult.

According to the Federal Statistical Office, full-time carers with three years of training receive an average of €18 per hour gross, while other workers in Germany make about €22 per hour.

A German Health Ministry spokesman told DW that finding "foreign care workers was one of many building blocks in our concept to improve the personnel situation in the care industry and cover the demand for personnel in the long term." He added that the ministry was working with other ministries to accelerate the recognition of foreign qualifications and approve residency permits.

The Labor Ministry reported that it "had its eye on this development in these areas of care work," and warned that the employees are covered by general labor laws that prohibit exploitation through overwork.

For now, the lack of a legal framework means that the care market remains extremely opaque: Only about 20 of 103 providers were willing to offer information for a GPPLEN survey on the issue.

That, in turn, has left the market open to organized crime. There have been reports in recent years of massive defrauding of health insurers through care scams: In January, internal police reports were leaked that showed that Russian mafia organizations were using care services to drain German state health insurance companies of an estimated €1 billion a year.

"That has especially affected the area of mobile care services," Knopp told DW. "And to counter the rise of the black market, it's so important that we regulate this market."

The German government has announced 13,000 more jobs for hospitals and care homes, but there is still a shortage of qualified medical staff. DW spent a shift with two nurses to learn more about the care sector crisis. (01.08.2018)

Starting in March, Germany will require COVID-19 vaccines for health care workers. Unvaccinated staff could be banned from work or even get fired. DW spoke with a nurse who works in a COVID ward, but says she won't get vaccinated — whatever the risk.

Hospitals throughout major Indian cities are bracing for the worst as a third wave looms, and scores of doctors and nurses are now infected with the coronavirus.