Young people without German citizenship are more likely to struggle to get vocational training spots than German counterparts, according to a new study. Their prospects are especially bleak in the country's east. 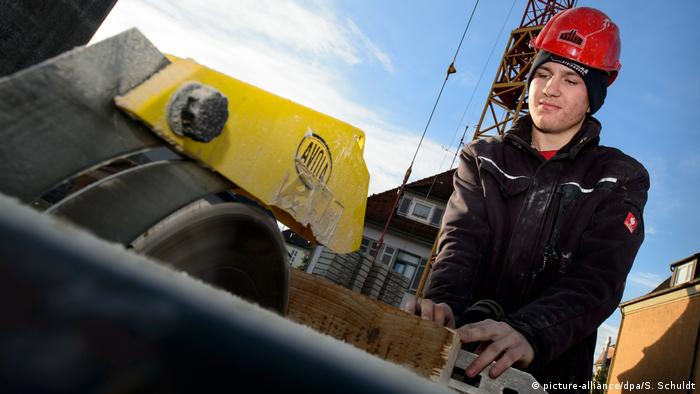 The study, published by the Bertelsmann Foundation on Monday, found that more than half of all "young people without a German passport" fail to secure a place in Germany's dual vocational education and training system.

The so-called dual-track scheme, which also exists in Austria and Switzerland, aims to prepare trainees for a practical, non academic job. Under the program, young people are put through three-year apprenticeships that alternate between classroom courses and hands-on work experience in a company.

Jörg Dräger from the Bertelsmann Foundation stressed that integrating foreigners into the education system was key. He said Germany's 16 states had made an important contribution by offering special language courses, but added that there was more work to be done.

"Vocational schools are increasingly taking on integration and socio-political tasks, but they need to be equipped financial, technical and personnel (support)," Dräger said. Fewer young people are applying for vocational training in Germany

The foundation's research looked at the state of vocational training across Germany between 2007 and 2016. It concluded that although opportunities for young people had improved overall, the situation varied from state to state.

According to the study, the gap between the number of German citizens and foreigners entering vocational training was particularly wide in the states of Schleswig-Holstein, Saxony and Bavaria.

Students with the lowest possible qualification from Germany's three-tier secondary education model, as well as teenagers without any school-leaving certificate at all, were similarly disadvantaged. In 2015, only 49 percent of these applicants received a training position, the study said.

The drop in dual training places was "particularly dramatic" in Germany's east, where there was 40-percent decline between 2007 and 2016, the study said. The number of students applying shrunk by 46 percent.

In 2016, 8 percent of training spots were left vacant because companies found no suitable candidates for 43,000 positions. At the same time around 80,000 applicants across the country did not receive an apprenticeship.

On Wednesday, German Education Minister Johanna Wanka revealed that the number of new apprentices entering the training system in 2017 had increased by 3,000 over the past year. Those latest figures are not covered in the study, nor are the thousands of asylum seekers who have arrived in Germany since 2015.

Coronavirus: Germany should not ease lockdown over Christmas, says top doctor 1h ago