Germany exports a secret of its success: vocational education | Business | Economy and finance news from a German perspective | DW | 27.03.2017

Germany has been trying to export one of the keys to its industrial success: its dual-track vocational education system. Slovakia is one of the countries that have made strong progress in adopting the system. 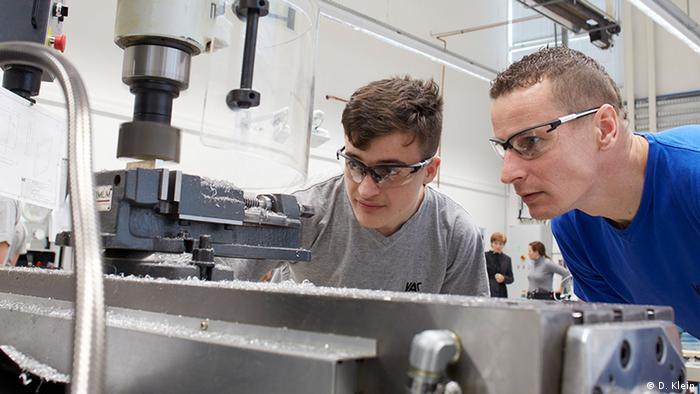 If you run a business, you know that one of the most important factors in the success of your enterprise is being able to find and hire well-qualified employees - people who know what they're doing in technical terms, how to complete an assignment, how to be a reliable member of a team and successfully navigate a workplace.

In much of the world, a crucial brake on development is a lack of well-qualified technical employees in business and industry. A core strength of the German economic model is that the country produces such well-trained employees systematically, and in very large numbers, through a 'dual system' for vocational education and training (Dual VET). The Dual VET system is a long-standing, key pillar of Germany's remarkable performance as a major industrial power. A similar system has long been in place in Austria and Switzerland.

"Yes, we're transferring a secret of Germany's success to other countries with Dual VET. But embedding it in other countries is a win-win," according to Thorsten Schlich, an official at the German Office for International Cooperation in Vocational Education and Training (GOVET). "It's a way of ensuring qualified employees at production facilities of German companies in partner countries. And also, if Germany sells advanced machinery and products abroad, expert technicians are needed to service and repair that machinery." 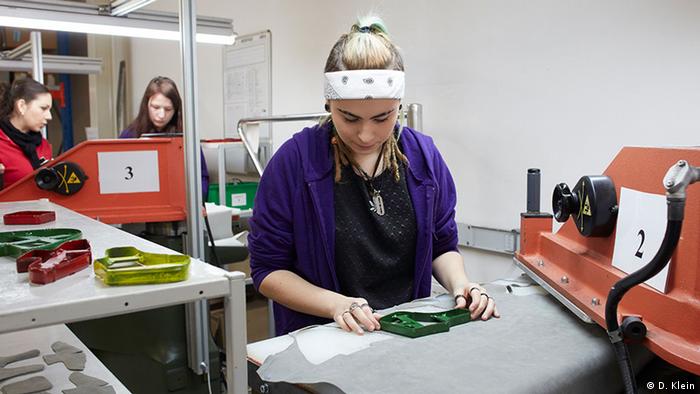 Cutting leather parts: a Dual Vocational Educational Training (Dual VET) student at a shoe production facility in Slovakia. In Germany, nearly every industry or service has its own Dual VET three-year traineeship program. In Slovakia, Dual VET is just getting started

But Dual VET is much more than a means to provide competent workers for German companies abroad. Advocates say it can be a transformative economic force in countries where it takes hold.

Germany's system puts young people through three-year traineeships composed, fifty-fifty, of classroom instruction in trade-school courses and on-the-job training at participating companies under the supervision of skilled mentors. Young people emerge from their apprenticeships knowing their trade, and knowing how to get a job done in a real work environment.

Some 52 percent of young Germans graduate from Dual VET apprenticeships - and in a great many cases, once they graduate, they're offered long-term employment at the company where they did their apprenticeship. 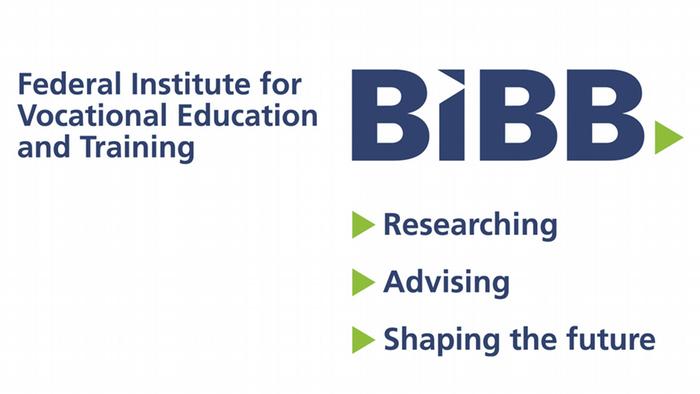 BiBB is one of a very large number of specialized government agencies that look after specific missions within the complex weave of German governance. Since the country is deeply embedded in the European Union, in global trade networks, and in the Atlantic alliance, as well as engaged in myriad projects in developing countries, BiBB has strong links to corresponding agencies in partner countries

In recent years, other countries have begun to recognize the usefulness of the Dual VET system, and are working to adopt their own versions of it - with the active encouragement and support of the German government, which has bilateral cooperation deals with 11 countries to promote the system.

Slovakia, a small European Union nation of 5.4 million people, is one of those countries.

This week in Nove Mesto nad Vahom, a town of about 20,000 residents northeast of the Slovakian capital Bratislava, human resources (HR) manager Ladislav Chudý has been hosting visiting HR colleagues from other Slovakian companies.

He's showing them how his company is implementing Dual VET to develop its own supply of well-qualified employees. Chudý works for Manz Slovakia, the Slovakian subsidiary of Manz AG, a designer and producer of high-tech automated production lines for the electronics, solar, and energy-storage industries. 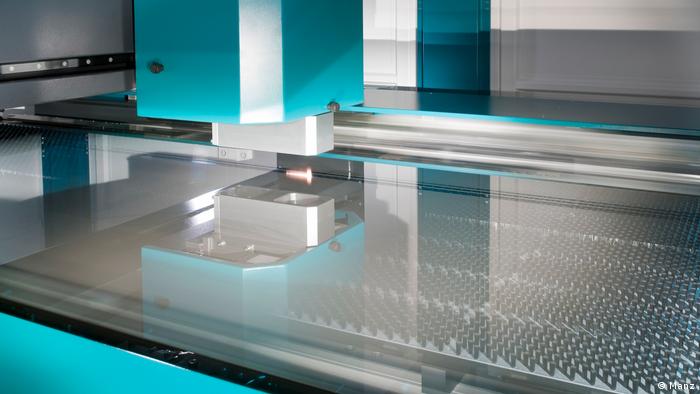 Founded in 1987 by then 25-year-old engineer Dieter Manz just a year after he graduated from a German technical university, Manz AG, based in southwestern Germany, has about 1,800 employees world-wide, and had sales of 231 million euros in 2016 ($250 million).

"Here at Manz Slovakia, we started with Dual VET in 2015. We now have four students in their first year and four in the second year of our four-year trainee program," Chudý told DW. "At the end of four years, they'll graduate with a trade certificate - and also with a high-school diploma that qualifies them to go to university if they choose. If all goes well, we hope they'll continue on as full-time employees once they graduate."

Asked if he doesn't worry that the students - who start at the age of 15 in the first year of the program, and will graduate at 19 - might leave for university after the company has invested so much time and effort in training and mentoring them, Chudý said: "We've got that covered - Manz also has cooperations with universities. If they want to study, we'll help them."

"Dual VET systems differ from country to country," said Maren Verfürth, a colleague of Thorsten Schlich's at GOVET. "Dual VET can never be transferred one-to-one from the particular form it takes in Germany to a partner country." 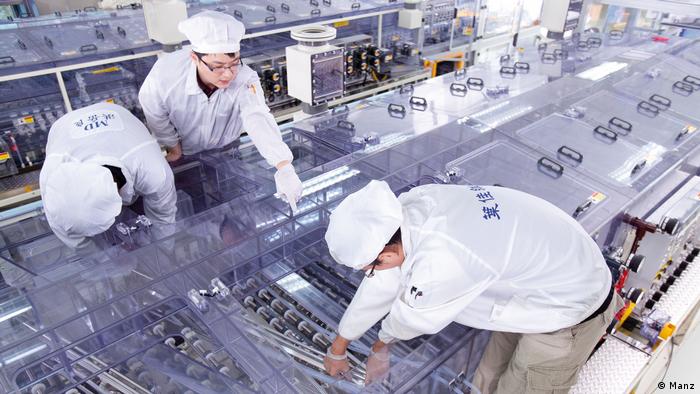 That's because the German version is embedded in a whole legal, historical and cultural context, and the context is different in Mexico or Slovakia or a US state, Verfuerth explained. Each country must develop its own version of Dual VET, and GOVET helps them with that.

In both Germany and Slovakia, dual-system trainees spend half their time in government-funded classrooms, learning the theory of their trade, and half in on-the-job training under the supervision of qualified mentors. In both countries, trainees normally spend the duration of their on-the-job training at a single company, which pays them - albeit modestly - a monthly stipend.

But the stipend is significantly higher in Germany than in Slovakia - several hundred euros a month in Germany, compared to a few tens per month in Slovakia. And in Slovakia, the principal administrative responsibility remains with schools, whereas in Germany, host companies play a larger role. 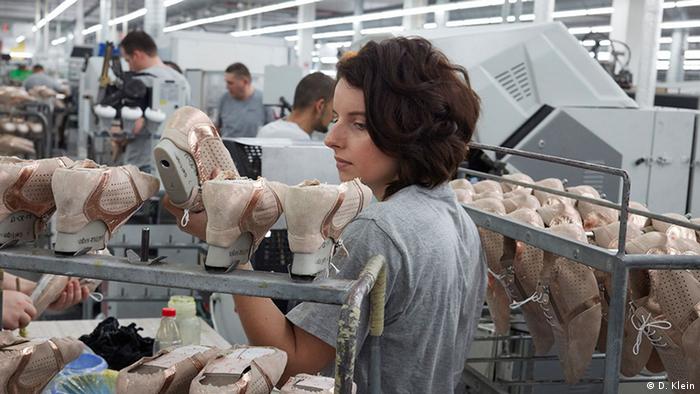 Dual VET at a shoe production facility in Slovakia. Students spend half their time learning on-the-job, under the guidance of qualified supervisors, and half their time in the classroom. The outcome is competence

A key barrier to adoption of the dual system: Preconceptions

Ladislav Chudý at Manz Slovakia and Maren Verfürth at GOVET both told DW that a big barrier to the adoption of the 'dual VET system' in many countries outside Germany was that parents, who are the decision-makers about whether or not to send their kids into vocational training, "tend to think such training means consigning their kids to hard, dirty blue-collar jobs," as Chudý put it. "What we do at Manz is invite the kids and the parents to come to our facility, which is spotlessly clean and high-tech, and that changes their perception right away."

At Manz, he added, technicians' jobs involve a lot of creative, constantly changing work, since they're part of teams that develop new automated production systems. It isn't like working on a production line. Once parents understand the nature of the job and the company, many are enthusiastic.

One difference between the German and Slovakian Dual VET systems is that Germany's usually lasts three years, and doesn't automatically lead to a university entrance qualification - although it is usually possible qualify for university through extra steps. 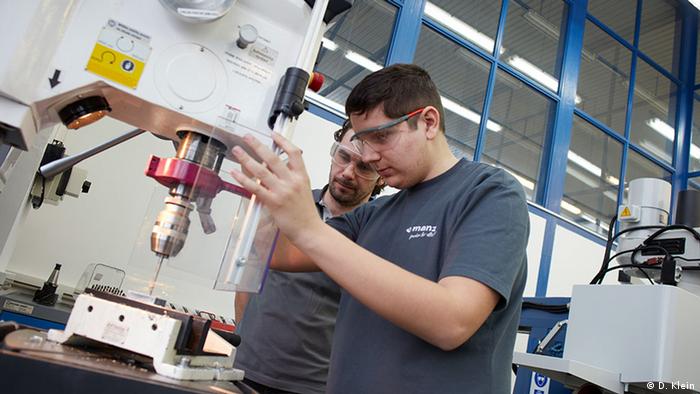 In Slovakia, by contrast, the four-year dual vocational educational program was specifically designed to routinely provide the formal requirements for university entrance on successful completion, in order to overcome parents' hesitations. "We want parents to feel comfortable that their kids have good options," Chudý said.

A key factor in the adoption of Dual VET in Slovakia, according to Željka Šenkovič, an official at the German Chamber of Commerce (AHK) in Slovakia, was the support of several influential politicians familiar with the role of Dual VET in Germany. They were able to pass an enabling law in 2015 - in part as a response to high youth unemployment in their country.

"It's crucial to have a legal framework supporting the dual VET program, providing all the accreditations," Šenkovič said. "Years of work preceded that law being passed... It was a key milestone."

Šenkovič said there were about 1,200 students now enrolled in dual VET in Slovakia, and the government had set a target of 12,000 by 2020 - though the target was "very ambitious," and might take a few more years to reach. 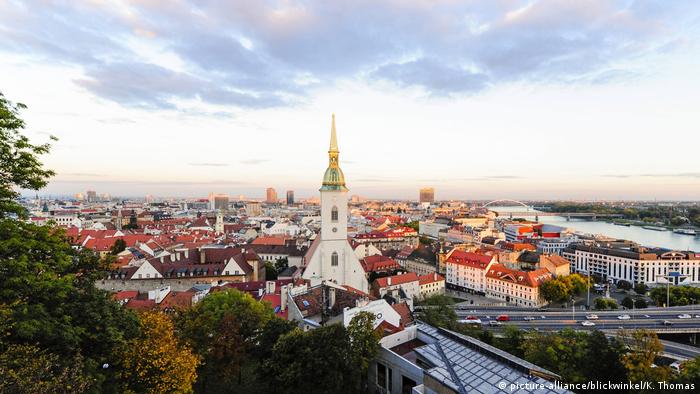 Bratislava, the capital of Slovakia. The small, land-locked country depends for its prosperity on integration into central European industrial supply chains

"It will be important to publicize the program and persuade parents of its advantages for their children," she added.

Maren Verfuerth told DW that Mexico was another country that had made great progress in adopting a dual VET system. In both Slovakia and Mexico, a key role in introducing dual VET was played by local subsidiaries of German industrial companies familiar with the advantages in developing trainees into well-qualified employees - but in both cases, the system was now being adopted by domestic firms.

"It takes time to make local firms familiar with the system, but after a while they see by example how well it works - for everyone concerned," Verfuerth said.

Work in the digital age