A new museum devoted to dealing with German refugees after the World War II is causing a stir. The controversial museum has Poland and the Czech Republic concerned some in Germany want to rewrite history. 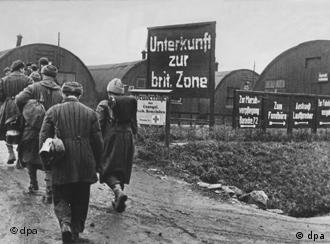 Plans for a controversial museum dealing with the ordeal of post-World War II German refugees were approved Wednesday, Sept. 3, by Chancellor Angela Merkel's cabinet in Berlin. Work may begin within weeks to set up the permanent exhibition in a government office block in the capital's Anhalter Bahnhof area.

Though Warsaw has now granted a cautious blessing to the museum, Poland and the Czech Republic have long worried the museum would portray them as villains of reprisals against ethnic Germans after the end of World War II.

Millions of ethnic Germans were expelled from Eastern Europe as borders were revised after Nazi Germany's defeat.

Descendants of the refugees campaigned for the museum, claiming that their sufferings had been blanked out of Europe's collective memory, and the Merkel government promised them a monument. The cabinet referred legislation to parliament to set up a foundation against expulsions and for reconciliation, said Bernd Neumann, a Merkel aide and federal culture and media commissioner.

The foundation will manage the museum in conjunction with the German History Museum. Work could start on the exhibition this autumn, Neumann added.

The next step will be appointing the foundation's board of directors. Poland has made clear it would resent any appointment of the refugee groups' national leader, Erika Steinbach, to the board, whereas the refugees adamantly support her.

The exhibition is expected be mainly based on an earlier exhibition in the German History Museum in Bonn about the poverty stricken refugees' difficult integration in post-war West Germany.

Neumann said the exhibition would focus mainly on the German experience but would also refer to the wider tragedy of 20th century ethnic purges including those conducted by the Nazis.

One in Nine Berliners Wants the Wall Back, Study Shows

Almost two decades after the fall of communism, it seems not all Berliners are happy about the Berlin Wall being confined to the dustbin of history. (27.07.2008)

Plans to build a Jewish museum in Cologne are being put to the test. While originally supporting the idea, the city's mayor is now not so certain any more that the winning design is the best one to build. (17.07.2008)

The ambitious oceanography museum opened its doors to the public in the north-eastern German port town of Stralsund on Saturday, July 12. It contains 39 huge fish tanks and seven life-size models of whales. (12.07.2008)