French President Emmanuel Macron has started a six-day tour of World War I battlegrounds. German President Frank-Walter Steinmeier attended a concert with him at the cathedral of Notre Dame de Strasbourg. 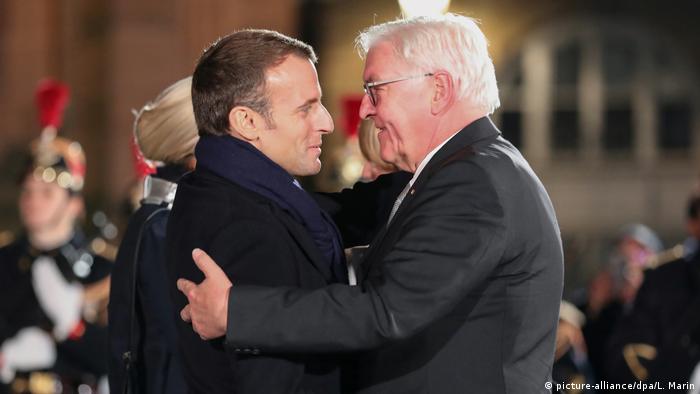 German President Frank-Walker Steinmeier joined French President Emmanuel Macron Sunday at a ceremony in Strasbourg's cathedral to observe a century since the end of World War I.

The commemoration began with a concert in the eastern border city — featuring German composer Ludwig van Beethoven and France's Claude Debussy — to celebrate the friendship between the two countries that were once wartime enemies.

Around 1.4 million French soldiers and 2 million German troops perished between 1914 and 1918. Many of the Great War's battles took place on French soil, and the remains of trench lines can still be seen in some areas along France's frontier with Germany, Luxembourg and Belgium.

Although he was born long after the war, 40-year-old Macron has warned against forgetting the lessons of the major conflicts of the 20th century.

"I am struck by similarities between the times we live in and those of between the two world wars," he told a French newspaper last week, adding that nationalism was a "leprosy" spreading worldwide.

Sunday's concert in Strasbourg began a week of commemorative events and intense diplomacy for Macron. Over the next week, he is set to travel across northern and eastern France to former Western Front battlefields.

On Friday, Macron will lay wreaths with British Prime Minister Theresa May in the town of Albert to honor British soldiers who died at the Battle of the Somme.

On Saturday, he is set to meet German Chancellor Angela Merkel in the village of Rethondes for a ceremony at the train carriage where the armistice was signed in 1918.

Some 60 heads of state and government, including US President Donald Trump and Russian President Vladimir Putin, are expected to attend the culminating ceremony at the Arc de Triomphe in Paris on Sunday, November 11 — the actual date of the centenary. World leaders are then due to attend a three-day peace forum to be opened by Merkel.

While German leaders will be attending events in France and Britain, no armistice ceremonies have been planned in Germany, which had a vastly different experience than that of the Allies after 1918.

Instead of peace, the end of the war gave rise to revolution and unrest between the far left and far right. It was followed by years of economic hardship, widespread poverty and hunger, and helped create the conditions that brought the Nazis to power in the 1930s.