Russia's invasion of Ukraine is dominating the agenda of Annalena Baerbock's three-day trip to the Baltic states. She said Germany had already sent weapons to Ukraine that were not announced publicly. 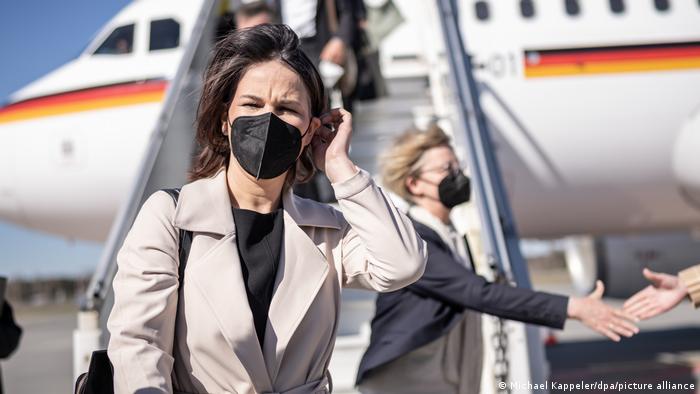 German Foreign Minister Annalena Baerbock has pledged greater support for the three Baltic states — Latvia, Lithuania and Estonia — during her three-day trip of the region.

"If necessary, we will defend every square centimeter of territory of our joint alliance," Baerbock said in a statement seen by DW as she embarked upon her trip on Wednesday. The three Baltic states are all members of both the EU and NATO.

"The Bundeswehr has already taken on a leading role among NATO's presence in Lithuania," she added. "We are ready to play a bigger role in the security of our partners."

She promised to contribute more to the security of the Baltic states if necessary.

Baerbock is meeting with the leaders of the three countries in their respective capitals during her trip. The focus of the talks will be the "reaction from the EU, NATO and the international community to the Russian war of aggression against Ukraine," a statement from the German Foreign Ministry said.

On Thursday, Baerbock addressed the growing chorus of criticism of Germany's apparent reluctance to deliver the weaponry Ukraine says it is in desperate need of to fend off the Russian onslaught.

"There are no taboos for us with regard to armored vehicles and other weaponry that Ukraine needs," she said after meeting her Estonian counterpart Eva-Maria Liimets in Tallinn.

Germany's priority was to ensure Ukraine quickly got older Soviet-designed kit that its military could use without additional training, she said, adding that it would backfill the stocks of allied countries that had such weaponry to spare, replacing it with more modern German-made equipment.

On Wednesday, the German foreign minister held a joint press conference with her Latvian counterpart Edgars Rinkevics following her first set of talks.

She said Germany "delivered anti-tank Stinger [missiles] and other things that we didn't talk about in public so that the deliveries could be carried out quickly and securely."

She added that the German government is not against sending armored vehicles, and has already signed off on the option, but currently does not have the capacity to send equipment. However, Baerbock said Germany was taking a long-term perspective on assisting Ukraine with military defense.

Baerbock also made it clear that German government sending arms to Ukraine does not make Germany a party to the war.

Germany has previously been criticized for not sending heavy weapons to Ukraine.

How did Baerbock address energy concerns?

Baerbock referred to the similar dependence both Germany and Latvia have on Russian gas, saying that the two partners discussed a "similar timely route" to reduce consumption of Russian gas.

"We have made mistakes in this area, but we cannot turn back the clock now, we cannot undo this," she said. "We all want to phase out gas supplies, sooner rather than later."

Baerbock said Germany and its partners must reduce trade with Russia as much as possible. Germany will end its imports of Russian oil by the end of the year, Baerbock said, adding that gas would follow shortly.

She went on to promise the three Baltic states, as NATO members, that they can "100% rely on Germany."

The German foreign minister also stressed the desire to learn from Latvia's offering of media for Russian speakers. "We have been working together with NGOs for years and media outlets to take the ground from under Russian propaganda channels," she said.

She called for "strong, independent media and a critical audience" to counter propaganda from the Kremlin.

What else is on Baerbock's Baltic agenda?

On Friday, Baerbock will head to Vilnius in Lithuania where she will meet President Gitanas Nauseda and Foreign Minister Gabrielius Landisbergis. German troops have been deployed to Lithuania as part of NATO exercises.

As former Soviet republics, Baltic countries are home to significant population of ethnic Russians, and have concerns about Moscow using this as a pretext for extending Russian influence.

The German foreign minister said that the Baltic states have been watching what is going on in Russia "intensely and with concern" for years. "I would like to listen to their experiences and insights," Baerbock said.

Are the Baltic republics ready?

Deutsche Welle: Relocating to Riga after closure of Moscow studio

Deutsche Welle (DW) is relocating the journalistic operations that were based in Moscow to Latvia following the closure of its Moscow studio and the withdrawal of its staff's accreditation by the Russian government.

Baltic leaders called for a bolstered NATO troop presence on the alliance's eastern flank. The call for an additional force presence comes amid a backdrop of escalating tensions with Russia over the fate of Ukraine.