Chancellor Olaf Scholz has said his government is providing money to arms manufacturers, but added that the Bundeswehr has nothing more to offer amid mounting criticism. 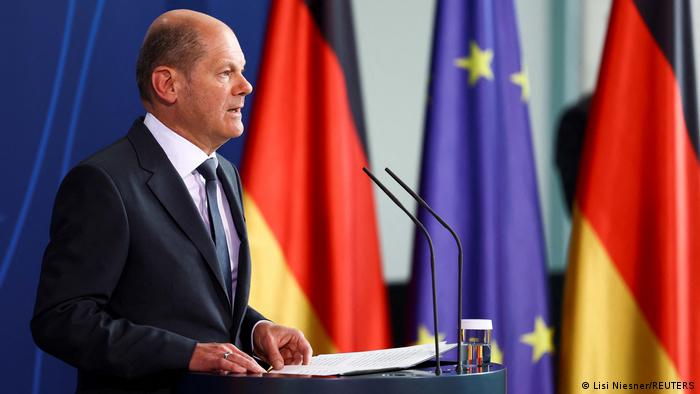 German Chancellor Olaf Scholz appeared to deflect criticism about his country's hesitance to deliver heavy weapons to Ukraine in a short speech in Berlin on Tuesday.

In his statement, Scholz said that, although the German army, the Bundeswehr, did not have much left to offer Ukraine, his government was supporting German arms manufacturers financially.

"We have asked the German arms industry to tell us which material it can supply in the near future," Scholz said, adding that Berlin was coordinating with Kyiv over what Ukraine needs and would supply the funding needed.

He listed anti-tank weapons, air defense equipment, ammunition "and also what can be used in an artillery engagement" as possible weapons that could be supplied.

The chancellor added that Germany was able to supply spare parts for certain weapons that other NATO allies were delivering to Ukraine.

Scholz: Maximum support for Ukraine but no NATO involvement

Scholz: Bundeswehr has nothing left to offer

Scholz has faced mounting pressure — from Ukrainian officials, German opposition politicians and lawmakers within his own governing coalition — to provide Ukraine with more robust equipment in the face of a fresh Russian offensive.

A day earlier, Ukrainian President Volodymyr Zelenskyy said, without naming Germany specifically, that his country faces a situation where there is "permission for Russia to take the lives of Ukrainians."

The German leader said in his statement, however, that his government was prioritizing help that could be offered immediately, and that, as for sending Ukraine supplies from the Bundeswehr, "we have to acknowledge that this possibility has reached its limits."

After decades of declining defense spending, the Bundeswehr has become known for its dearth of equipment and recruitment issues.

As a parting note, Scholz also made clear that, while allies may choose to supply heavy weapons to Ukraine's war effort, "NATO can't and won't get directly involved in the war."