Who′s next? Lithuanians prepare for potential Russian aggression | Europe | News and current affairs from around the continent | DW | 16.04.2022

Who's next? Lithuanians prepare for potential Russian aggression

Lithuanians are anxiously following events in Ukraine. Many are preparing for a worst case scenario and some are training to take up arms against Russia. 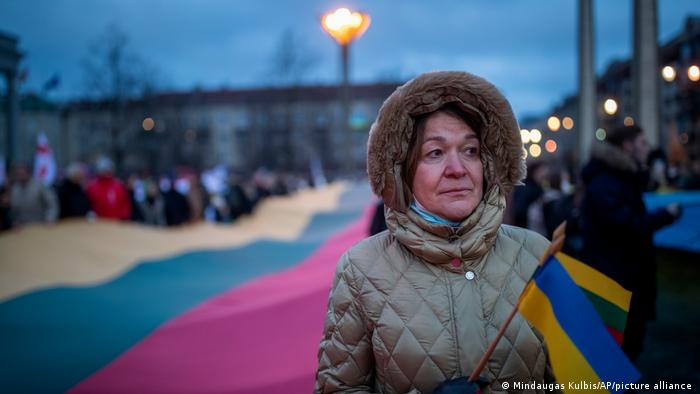 Fire away! And the shooting begins. For three years now, Paulius Liskauskas has been training for the worst-case scenario. These days, that scenario has never felt so close, the 39-year-old Lithuanian told DW.

"I actually wanted to join the Lithuanian Riflemen's Union in 2014 after Russia annexed the Crimean Peninsula and gave the first signs of this war against Ukraine," he said. "Even back then, Russian state propaganda had Lithuania in its sights. To us, that means we could be next."

Along with Liskauskas, a dozen other men and two women are also having a go on the weapons. This is all happening in darkened room on the first floor of a small building in the pedestrian zone in Marijampole, a city in the south of Lithuania.

A screen hangs on the wall. On it, there are animations of terrorists hiding behind one thing or another. They are the gunners' targets.

In fact, the whole thing might even be another ordinary computer game, if it wasn't for the loud shrieks coming out of the speakers every time a shot is taken. The loud noises are there to remind everyone of the real war, the one happening in Europe right now. 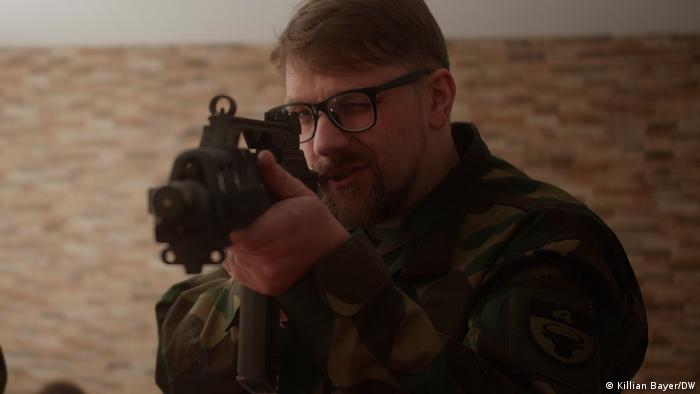 One of the women in the room happens to be Liskauskas' wife. Both of them are wearing the olive green uniform of the Riflemen's Union, a paramilitary organization supported by the Lithuanian state. Basically the Lithuanian Riflemen's Union is a kind of addition to the country's existing military, made up of Lithuanian civilians who regularly train with weapons and who are ready to fight if worst comes to worst.

The Riflemen's Union has a long tradition as well as a controversial reputation. It was founded in the early 20th century during the struggle for Lithuania's independence. At least some members of the Riflemen's Union are accused of collaborating with the Nazis in World War II. After Lithuania became part of the Soviet Union, the group's members fought against the Soviets as Lithuanian partisans. Some ended up victims of Stalinism.

After Lithuania declared independence in 1991, the Riflemen's Union experienced a renaissance. And since the war began in Ukraine, the group has seen a major influx of enthusiastic locals. Liskauskas is happy to now be one of 14,000 members.

In particular, this is because Liskauskas' family lives in an area that would cause major military and strategic problems in the event of a Russian attack: the so-called Suwalki Gap, which is named after the nearby town of Suwalki.

German troops arrive in Lithuania as part of NATO effort

The Suwalki Gap is a narrow strip of land connecting Lithuania to Poland. It's squeezed between the Russian-controlled enclave of Kaliningrad to the northwest, and the country of Belarus to the southeast. The Belarusian government is considered a Russian ally.

The Suwalki gap is only 65 kilometers in length and also the only land connection between the Baltic states and other NATO countries. In a crisis, many locals here fear that Russia might block this gap. As a result they feel a deep antipathy towards Russia.

Liskauskas, who works as a lawyer, shares this antipathy. He does, however, make a distinction between Russian politics and ordinary Russians. "I have Russian clients, whom I am still in contact with; I don't feel hatred toward them, just towards the Russian state and its propaganda."

Russian train passengers enroute from the Russian capital Moscow to the Kaliningrad exclave pass though Vilnius railway station, where they may not disembark. There they are confronted with posters showing grim scenes from the war in Ukraine. Each posters bears the same message, asking Russians whether they really want to keep supporting President Putin. 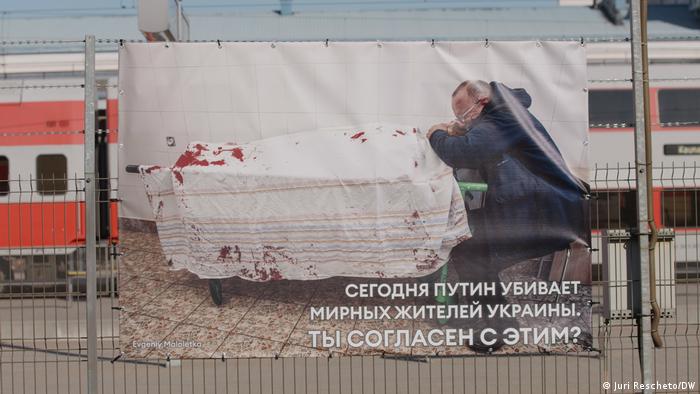 Readying for an emergency

For 45 years, Lithuania and Russia both belonged to the Soviet Union. After gaining independence, Lithuania joined NATO in 2004. In recent years, tensions with Russia have been growing.

The Ukraine war is a wakeup call, says Lithuanian MP Laurynas Kasciunas. His country must be better armed to fend off a potential Russian attack, he told DW. "We only have a few years left to prepare, that's why we need a bigger NATO presence as a major deterrent."

It is thanks to the Ukrainians that Lithuania has time to make such preparations, says Tomas Janeliunas, a political scientist at Vilnius University. When Russia launched its assault in Ukraine, some Lithuanians considered fleeing their own country out of fear, he says.

Now, however, many have come to realize Russia's army is weaker than expected, and Ukraine's resolve more than anticipated. "Things like the war in Ukraine are a good lesson for us, they give us time to ready ourselves. The Ukrainians are buying us time, we need to use that well and prepare," Janeliunas says. 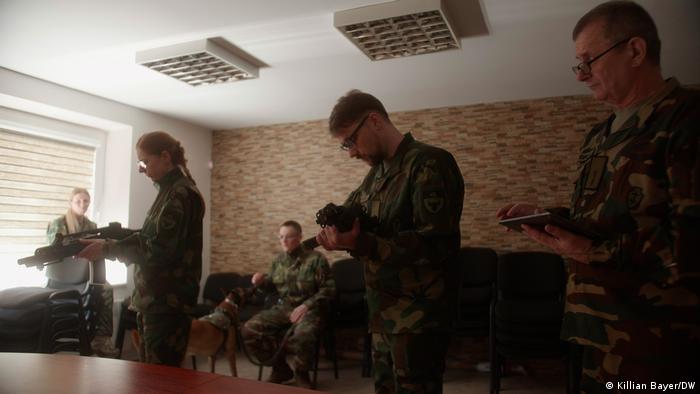 And so, volunteers like Paulius Liskauskas with the Riflemen's Union keep honing their aim at target practice. While he would certainly welcome more NATO troops on Lithuanian soil, he says that if war broke out, he and his wife would both take up arms.

"It is difficult to talk about the future," he told DW. "We are living in difficult times and nobody knows what the future will bring. That's why it is important to live in the here and now, and to take small steps and use patriotism to make our own country stronger."

The story was originally written in German.

Baltic leaders called for a bolstered NATO troop presence on the alliance's eastern flank. The call for an additional force presence comes amid a backdrop of escalating tensions with Russia over the fate of Ukraine.

The German and British defense ministers announced that they were prepared to send even more troops than planned to NATO units in the Baltic states. Separately, the UK announced military exercises in northern Europe.

Are the Baltic republics ready?