German food bank slammed for barring foreigners from registering | Germany | News and in-depth reporting from Berlin and beyond | DW | 23.02.2018

An Essen food bank says it is only allowing Germans to sign up for free food because the elderly feel uncomfortable with the large number of foreign men during pick-ups. Its chairman denies allegations of xenophobia. 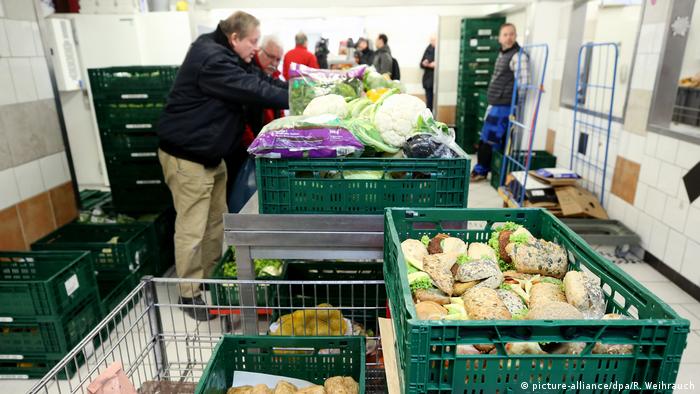 The board of "Tafel" food bank in the western German city of Essen has caused a stir by imposing a new rule: For the time being, foreigners cannot receive new membership cards. No German passport, no free food.

There are more than 930 "Tafeln," or tables, across Germany. They collect groceries that are nearing their sell-by date from stores and restaurants and hand them out to people in need. To qualify, you need to receive state assistance such as unemployment payments. With proof of that, people can sign up with the Tafel and receive a one-year membership card for their family that allows them to come to a food pick-up at a specified time once a week.

The Tafel in Essen originally established its controversial rule in December but the story blew up on Thursday when local media got wind of it. On Friday morning, Jörg Sartor, the chairman of the Essen Tafel held an impromptu press conference in the organization's office. As more and more camera crews and journalists piled into the room, he alternated between offering everyone coffee and defending his decision. 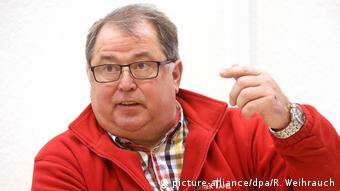 Sartor: 'I really don't understand all the excitement'

"I really don't understand all the excitement," Sartor said after stressing that neither he nor anyone on his team was xenophobic.

Other Tafel branches from across Germany have condemned the step and some critics are calling the rule racist. But Sartor says they changed the rules simply because 75 percent of people who came to pick up food from the Tafel locations across Essen were foreigners — a number the board considered too high.

The Essen Tafel currently has 1,800 membership cards issued that cover roughly 6,000 people. And yet, "you could pick the few German people out of the crowd at the food handover sometimes," board member Rita Nebel said.

'Too much pushing and shoving'

Sartor and Nebel claim that the large number of foreigners, especially young men, caused trouble when it came to handing out the food, saying that elderly Germans weren't feeling comfortable anymore and stopped showing up. 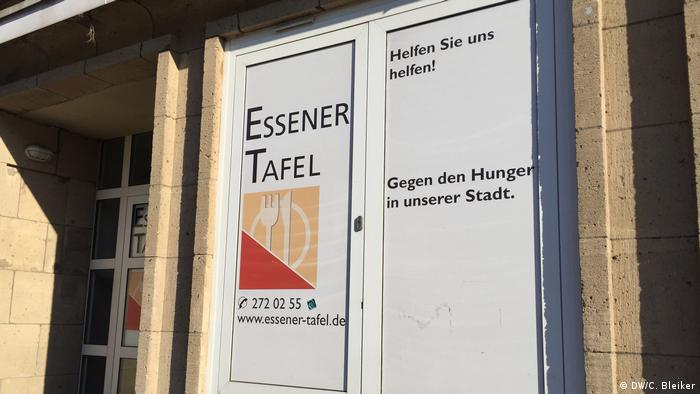 'Help us help! Against hunger in our city' — it seems the Essen Tafel's motto currently doesn't apply to foreigners

"I was approached several times because there was too much pushing and shoving," Sartor told DW. "I want the people here to behave in an orderly way toward each other. And when there isn't an equal balance [of Germans and foreigners], that doesn't work."

Horst, a German retiree, was among the roughly 30 people waiting to pick up groceries outside the Essen Tafel on Friday. He said he could see that the new rule was unfortunate for some, but that it did have a point. 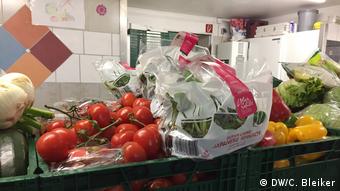 "There are many Russians, Polish, people from Africa," Horst said. "They can get brash sometimes, for example some show up late for their 12:30 pick-up time and then try to cut in line in front of us, who have the 1:30 pick-up time. I think we should all be thankful that a service like this exists at all."

The Tafel is an nongovernmental organization that is neither affiliated with the cities where branches are located nor with the state or federal government. Its number one task is to save food from going to waste. Its drivers — most of whom, like almost all those who work at the Tafel branches, are volunteers — go from store to store to pick up groceries.

Ban is only temporary

The Tafel is not, however, solely responsible for making sure that no one goes hungry — that is the state's task, as Sartor pointed out.

"We support people in need so that with the money they save on groceries, they can maybe take their kids to the pool or the movie theater for once," the 61-year-old said. "If anyone here starved just because the Tafel didn't exist anymore, something would be going very wrong in this country."

That's why the chairman doesn't see too much of a problem with denying service to foreigners who are now trying to register with his food bank. And the ban is only supposed to last for another six or eight weeks anyway — definitely not longer than summer, Sartor said. 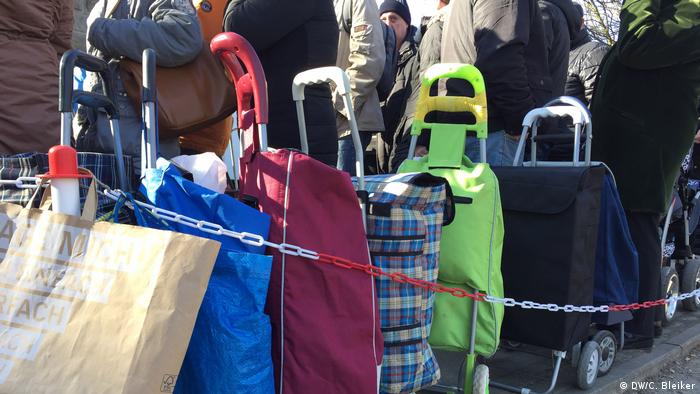 Russian, Arabic, German — a variety of languages can be heard in the line outside the Essen Tafel

That is of no help to Carole. The French single mother of two came to the food bank two weeks ago to get a membership card and was turned away. On Friday, she was in line at the Tafel to pick up the groceries for her pregnant friend.

"This makes me sad," she told DW while comforting her crying toddler. "I've been in Germany for years and I have an EU passport, but I can't get food."

Carole hopes the ban will be lifted soon.

Speaking to journalists on Friday, Sartor proudly announced that the percentage of Tafel card-owners without a German passport had already decreased from 75 to 71 percent since he established the new rule in December.

The board of the Essen Tafel considers this a success.

Poverty and social exclusion: Millions of Germans on brink

About 20 percent of people in Germany are threatened by poverty and other forms of social exclusion. According to EU statistics, close to a quarter of the bloc's residents faced such precarious conditions in 2016. (08.11.2017)