Poverty and social exclusion: Millions of Germans on brink

About 20 percent of people in Germany are threatened by poverty and other forms of social exclusion. According to EU statistics, close to a quarter of the bloc's residents faced such precarious conditions in 2016. 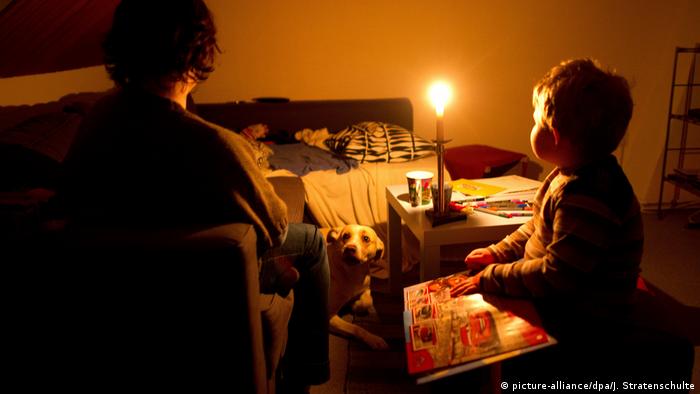 Poverty and other forms of social exclusion affect 16 million people in Germany — 19.7 percent of the population — the Federal Statistical Office reported on Wednesday as part of an EU study.

The study defines threatened people as those who receive less than 60 percent of the median national income, are subjected to severe or persistent material deprivation, or live in households with "very low work intensity." According to the study, about 16.5 percent of people in Germany face such precarious conditions because they are paid too little. The threshold for determining whether a person is threatened by economic circumstances was €1,064 ($1,233) per month for singles and €2,234 for households with two adults and two children younger than 14.

Materially deprived people — those who cannot afford rent or utilities, for example — amounted to 3.7 percent. (With multiple forms of exclusion, categories overlapped.) Just under 10 percent of people younger than 60 in Germany live in households with very low labor force participation. The study found that women, especially those who are older than 65, are more threatened by unsustainable conditions than men.

The proportion of threatened people is "higher than ever since the unification of the Bundesrepublik and the German Democratic Republic," the social scientist Christoph Butterwegge told the KNA news agency.

The Cologne Institute for Economic Research, which advocates for businesses, urged the government to put its resources toward returning impoverished people to private payrolls. "Policies should be strengthened in intensive support of the long-term unemployed, such as additional training measures and temporary wage grants," the institute recommended in a statement released on Wednesday.

Across the EU, 23.4 percent of people face exclusion, 17.3 percent are threatened by poverty, 7.5 percent live in conditions of material deprivation, and 10.4 percent are in households with lower labor force participation. The numbers have remained relatively steady for nearly a decade now.

In Bulgaria, 40.4 percent of the population lived in imposed adversity in 2016, followed by Romania (38.8 percent) and Greece (35.6 percent), where creditors, led by Germany, have enforced seven years of harsh austerity. With 13 percent, 13.3 percent and 15.3 percent, respectively, Iceland, the Czech Republic and Norway offered relative financial sustainability for the largest proportion of their populations.