According to a new study, 21 percent of German children and their families live in permanent poverty. Such kids are excluded from lives that many of their peers take for granted. 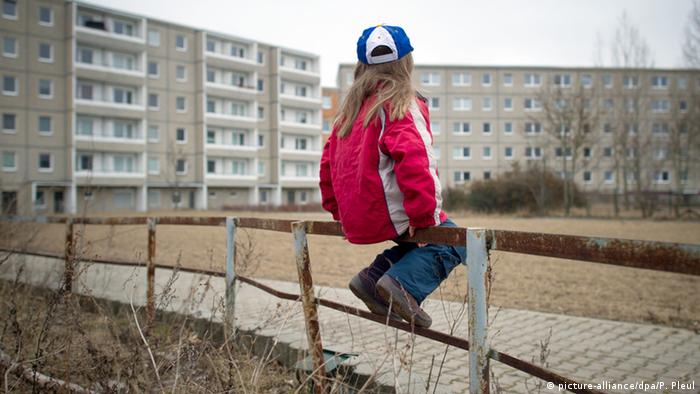 Children whose families are below the poverty line in Germany are likely to stay there. That's the main takeaway of a long-term study commissioned by Germany's Bertelsmann foundation that evaluated the living standards of more than 3,000 children over a period of five years.

Researchers found that 10 percent of children surveyed have experienced short-term poverty. However, 21 percent of children are in conditions of permanent or recurring poverty. The risk is especially high for boys and girls with at least two siblings, children of single parents and kids whose parents received a low level of education.

"Germany is a wealthy country that has seen an economic upswing in recent years," Anette Stein, Bertelsmann's family policy expert, told DW. "But many children and families did obviously not profit from that."

The study defined poor families as those whose income is 60 percent or less of the household average in Germany and families who receive state welfare.

Family background is a strong predictor of a child's academic future, according to studies. Kids who are long-term impoverished are less likely to receive a university education, which then often shuts the door to higher-paying jobs. This can repeat across generations.

"That's really sad for the kids concerned, but it's also not good for society at large," Stein said. "It means poverty is passed on and these children will grow up to be adults who, again, need support from the state or who at least won't pay into the social insurance system." 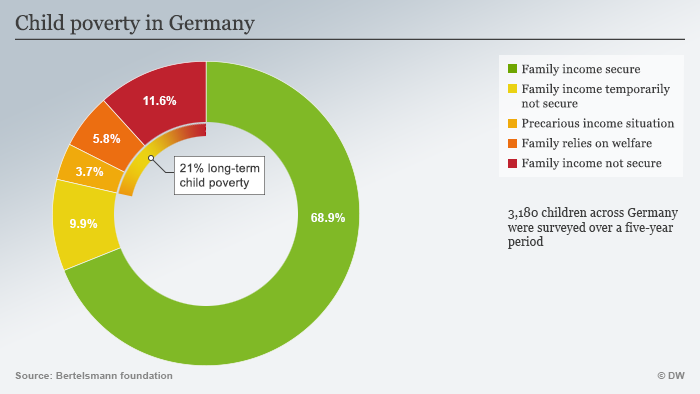 Bertelsmann listed 23 quality-of-life factors that many impoverished people lack, from adequate, affordable living space to laundry facilities to outdoor areas for children to play, such as a yard or even a balcony. Other items on the list included winter clothing, financial savings, and the means for modest entertainment expenditures, such as inviting friends over for dinner, seeing a film once a month or taking an annual weekly vacation.

Children defined by the survey as coming from permanently poor families lack access to an average of about seven of these; those in temporary poverty are missing out on an average of 3.4.

"There are currently 2.7 million children and youth growing up in poverty, and that has far-reaching consequences," Heinz Hilgers, the president of Germany's child protection agency, the DKSB, said in a statement released on Monday. "A child who experiences poverty hardly has a chance of true participation in society. That's especially true if poverty becomes permanent." 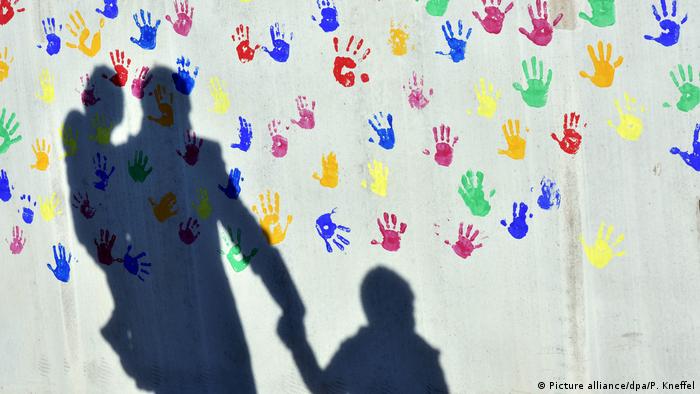 Poverty can affect families for generations, with nontraditional families especially at risk

First of all, the true needs of children need to be surveyed regularly and systematically. "We can't just treat children like small adults," Stein said.

Secondly, the social support system needs to be made simpler. There are multiple options that families can apply for, but they often need to fight their way through a bureaucratic jungle to find the right one. Bertelsmann and the DKSB call for a unified program to help poor children.

And, thirdly, children need leisure opportunities, as well as educational activities that are tailored to the needs of families in their neighborhoods.

With these measures, the DKSB's Hilgers said, authorities might finally "truly contribute to making equal chances for all children in Germany a reality."