German floods: Up to €30 billion needed for recovery fund 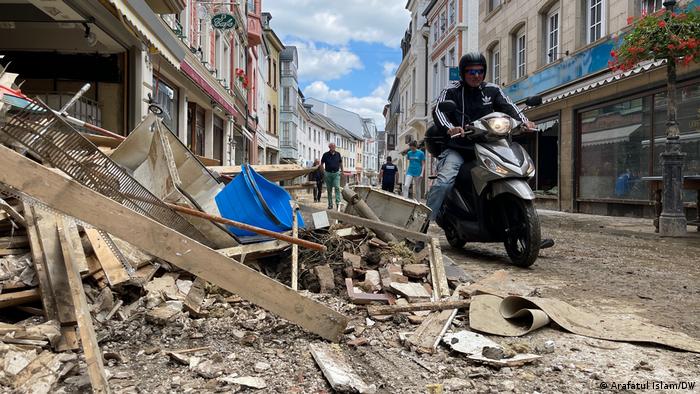 The floods were the worst Germany has seen in decades, and were met with a massive cleanup effort

The comments come ahead of a conference on Tuesday between Chancellor Angela Merkel and state leaders, where they are expected to sign off on the recovery plan.

"The total damage in North Rhine-Westphalia will reach €13 billion, according to initial estimates," Laschet told members of the state's parliament.

The floods inflicted damage on more than 150 schools in the state, along with 200 day care centers.

Laschet promised to do everything possible to help affected towns and families recover from the disaster.

He said the cost of recovery in neighboring state of Rhineland-Palatinate "will reach a similar, perhaps even higher sum."

"All the states have shown they are ready to commit to this €20 to €30 billion," he added.

The cost of the recovery will be split equally between the federal government and the states.

News magazine Der Spiegel reported on Monday that the federal government has agreed to a recovery package of €30 billion. The amount is up from the €10 billion sum that the magazine reported was in the talks last week.

The floods in the two western German states left 184 people dead. The eastern state of Saxony-Anhalt was also impacted by the waters, along with the southern state of Bavaria.

Laschet and other German officials have been criticized for their handling of the crisis.

Some residents of heavily-impacted areas have said they received no warning prior to the deadly floods. German prosecutors recently opened a probe into the district chief of the hard-hit area of Ahrweiler for negligence.

Laschet was slammed for laughing while on a visit to a flood-hit town with German President Frank-Walter Steinmeier last month. The North Rhine-Westphalia premier later apologized for his mistake.

"It was dumb, stupid, I shouldn't have allowed these few seconds to happen," Laschet told broadcaster RTL West on Monday.

Although Laschet has been seen as the front-runner to replace Angela Merkel as chancellor during September's general election, a recent poll suggests that Social Democratic Party (SPD) candidate Olaf Scholz could lead the country as part of a three-way coalition.

German floods: Where did fake news about 600 dead babies come from?

Rumors that the bodies of 600 children have been found in Germany's flood disaster areas are rife on social media and other online platforms. DW looked into the story to find the origin of the false reports.

Following the devastating floods in western Germany, many winery owners in the Ahr Valley are facing financial disaster. Now special wine bottles soiled with mud are being sold to stave off ruin.