German ′flood wine′ sold to combat fallout of flood disaster | Germany | News and in-depth reporting from Berlin and beyond | DW | 31.07.2021

Following the devastating floods in western Germany, many winery owners in the Ahr Valley are facing financial disaster. Now special wine bottles soiled with mud are being sold to stave off ruin. 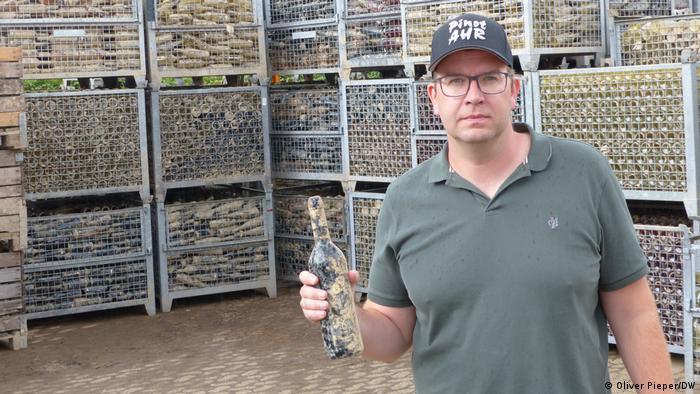 Peter Kriechel has thousands of muddied bottles of wine to sell

They say it is their worst year for wine — and of course, they are right. And yet a special initiative is selling a collection of six mud-covered bottles of wine for €120 ($140). Those bottles bear the seal "authentically muddied" and the funds raised by these "flood wines" will go directly to the 50 winegrowers in the Ahr Valley whose wine cellars were flooded by rising waters. It is a silver lining for people who have lost almost everything because of the disaster.

Benno Gilles is one of them. The winemaker from Marienthal was hit hard. When the waters came, he holed up in the attic with his family and the people staying in his hotel guesthouse and saw with his own eyes how the mass of water washed away his livelihood. "I've been working here for 40 years as a winemaker. It's a third-generation family business, but in a few hours everything was gone." 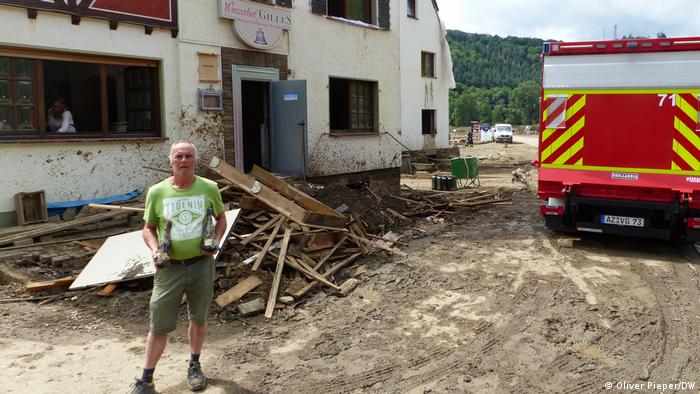 Benno Gilles says he won't give up

Gilles' winery isa popular draw for day-trippers who stop along the idyllic red wine trail. They can taste Gilles' homemade wine there — he produces 25,000 liters a year — and stay overnight in the five guest rooms. But now two weeks after the flood, Marienthal still resembles a war zone and Benno Gilles' winery a ruin.

"I estimate that around 10,000 wine bottles and all my machines are ruined along with half a hectare of my vineyard," he said. "If I'm lucky, I can start production again next year and save the 2022 harvest." In his wine cellar, there are still 8,000 liters in huge oak barrels that Gilles now wants to decant. There are also thousands of dirty bottles. "We can do this. We're not giving up!"

The Ahr region depends on viticulture

Winery neighbor Paul Schumacher also only briefly thought about throwing everything away after the flood half-destroyed his winery. In the guest room of the winery, the water lifted the refrigerator to the ceiling, where it got hooked on the chandelier. It was still hanging there even after the water had receded. "The first day I thought, for God's sake, what now? But if it's somehow financially possible, we'll try to keep going." 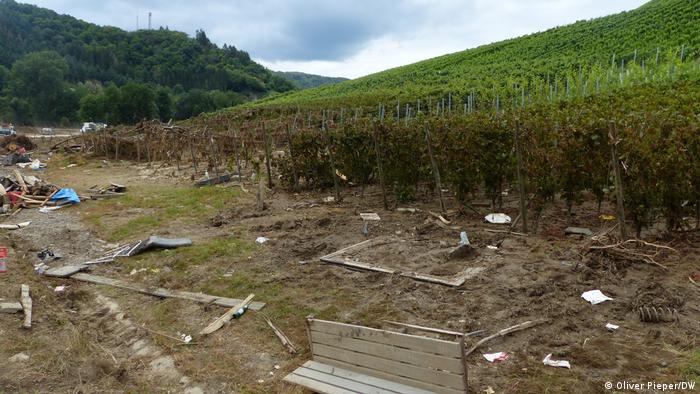 The low-lying vineyards have been flooded and destroyed

At least Schumacher was able to save 20,000 bottles of his wine. Almost all of them still have their labels. He is having them washed at fruit farms nearby. In his cellar, 42 wine barrels are still waiting to be decanted. Before the flood, he sold his wine to Denmark, Belgium, and even Slovakia.

Schumacher's dream in life was always to produce his own wine. He started very small as a winemaker 20 years ago and then bought the winery in Marienthal in 2006. With five hectares of vines, he like Gilles is not one of the larger winegrowers in the Ahr Valley, but it is precisely these small family businesses that have been hit particularly hard by the floods.

"I estimate that 60% of the winegrowers here don't have insurance for natural disasters just like me," said Schumacher. "Wine is the economic engine for everything here. Hotels, restaurants, and craftsmen are all dependent on viticulture. If that doesn't work anymore things look pretty grim." 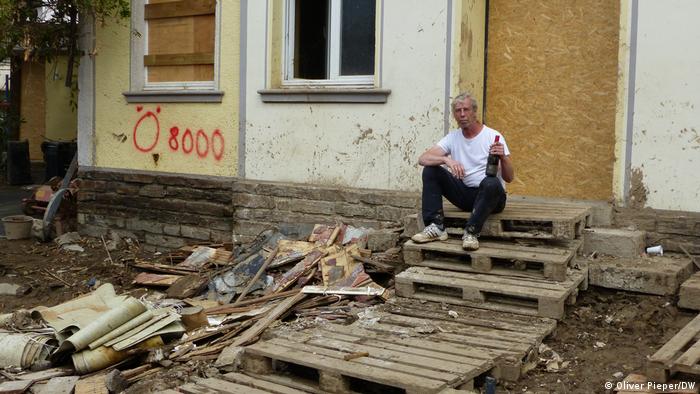 Paul Schumacher has no insurance against natural disasters

Rebuilding will be a marathon

The man who won't let it come to that has his hands full. Peter Kriechel is the largest winegrower in the region and chairman of the Ahr Wine Federation, which handles marketing for the winegrowers. He is also trying to get his winery back in order after the floods. He and restaurateur Linda Kleber are behind the "flood wine” idea.

The program functions like this: Donors can purchase unbroken bottles of wine online. They receive them in the condition they were salvaged in. These bottles soiled by the mud have what it takes to become a symbol of the region. They stand for the flood disaster and the spirit of new beginnings all at once. The initiative was implemented in just three days and is about to break the one-million-euro mark.

"We've lost all infrastructure here. There will be no bridges, roads, water, electricity or gas, until probably next year," Kriechel said, "the whole economy is decimated on an unbelievable scale. It's going to be a marathon to get back to where we were."

Kriechel had to write off more than a quarter of his 200,000 stored bottles when his cellar flooded. He was without power for twelve days, all the machines such as the wine presses are broken and his 22 employees are still dashing through the winery with a high-pressure cleaner to remove the toughest mud. "Compared to other winegrowers, however, we still got off easy here in Ahrweiler. Many colleagues lost everything and don't even have a single bottle left." 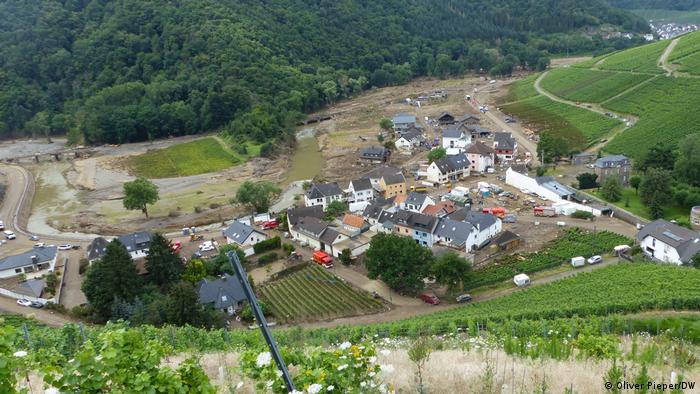 Two weeks after the floods have receded from Marienthal, residents have cleared much of the debris

The solidarity that is currently being shown in impressive fashion in the region has pulled the winemakers together, and not just with the "flood wine" initiative. In the vineyards of the Ahr Valley 60 colleagues from the Moselle and other parts of Germany are working every day to try and save this year's harvest. Competitors have become friends who lend a hand in times of need.

The "flood wines" can be purchased until September. Peter Kriechel is currently organizing the logistics for shipping. He is steadfast in his belief that the bottles will not only adorn wine cellars as symbols of support for the devastated region but that they can still be enjoyed.

"I just got a call from a lab that took samples of the wines. They told us the contents were not damaged in any way and that they were safe to drink. Even though the donation is the real focus, that is still very important to us."

Thousands of tons of refuse are being cleared from Germany's flood-hit regions. Removing unprecedented mountains of belongings is a challenge, but it is also helping residents begin to move forward.

The recent floods in western Germany not only killed humans and destroyed homes, but affected hundreds of animals. DW reports on the operations of animal rescue services and volunteers.