Rescuers bring terrified animals to safety after Germany′s floods | Germany | News and in-depth reporting from Berlin and beyond | DW | 29.07.2021

The recent floods in western Germany not only killed humans and destroyed homes, but affected hundreds of animals. DW reports on the operations of animal rescue services and volunteers. 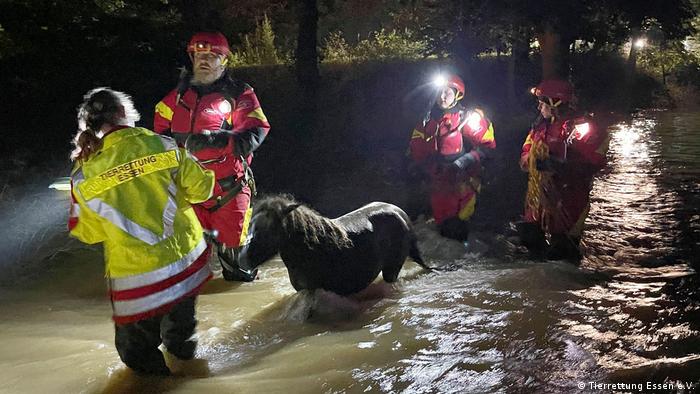 Animal rescuers were able to bring two ponies to safety

Sandra Bischoff, who lives in Cologne in western Germany, was getting ready for bed when she heard about the floods in the Erft valley. Her thoughts immediately turned to the animals in the area. The owner of three horses in a stable in Leverkusen, 22 kilometers (13 miles) from her home city, Bischoff is in frequent contact with other breeders.

As details surrounding the extent of the flooding emerged, Bischoff set about organizing a group of volunteers, comprising of her 70-year-old mother, her daughter Margo and friend Lisa Herbst. The group immediately set off in three cars, all towing horse floats, to the flood-hit area. 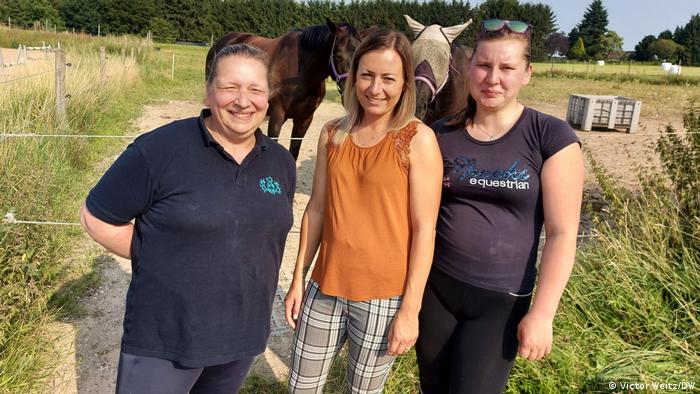 "It took us a while to get to the Erft valley because it was pouring with rain," Bischoff told DW. "As we approached the stables, we saw a huge lake. The water came up to over our knees. We could see the blue lights of the rescue services and police in the dark. The horses were really scared, they did not understand what was going on."

Bischoff said it was not easy getting the horses into the trailers. "They didn't know us, but since we were experienced with animals we were able to win them over. I do not know how long it took us to get the six horses in [the floats], but the police and firefighters were telling us to leave the area so we did not end up in even more danger. They were rescuing people from the water," Bischoff added.

"We only calmed down once we finally got the horses into dry and safe stables back in Leverkusen," explained Lisa Herbst.

The owners picked up the evacuated horses within a few days, but Bischoff has not stopped helping. Through social media, she has organized food, medicine and sedatives for horses in the area hit by flooding. One problem is that a lot of insects have invaded the area because of the high humidity, so special masks, sprays and creams are needed to keep them away.

Bischoff said she was impressed by the solidarity. "My phone keeps ringing and online there are so many offers of help. So now we have to coordinate the aid and make sure the food and medicine get delivered," she said.

But she insisted she and the other helpers were not heroes. "I love animals and I'm always ready to help them. I'm certain my rescue colleagues would have done the same if myself and my animals needed help. The affected regions will be needing our help for a while yet." 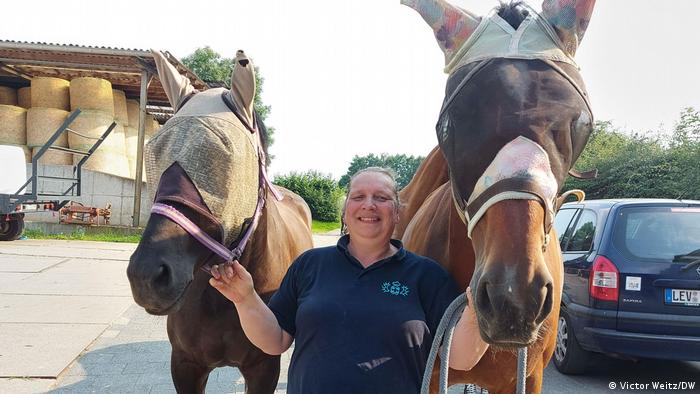 The Tierrettung Essen animal rescue service is on call 24 hours a day, 7 days a week, and it has experience rescuing animals from floods from when the German state of Saxony was badly affected in 2013. The service has rescued about 1,600 animals and has all the correct equipment, explained founder Stephan Witte.

"We have new, modern and very professional water rescue equipment so that our teams stay safe, and we also have a boat, drysuits, mountain boards, floating carriers for dogs and for rescuing pets," he said. "We also have special off-road vehicles to reach remote areas."

This has proven very useful in the past month. One night, the team received a call from the owner of nine ponies who were caught up in the floods in Linnich, some 115 kilometers away. Three teams were sent out to help immediately. They surveyed the situation, put on special waterproof overalls and set off to find the animals.

It was 3 a.m. when the first two ponies were spotted and brought to safety. "But the strong current made it impossible for the animal rescuers to rescue any more ponies from the flooded paddock," said Witte. "But luckily, the seven ponies saved themselves by finding a hill where they were safe. We had to stop our operation because it was becoming very dangerous for the humans, too. But the owners were extremely pleased about the two rescued ponies. The water level rose to between one and two meters [3-6 feet] during our rescue operation."

'We will never forget the emotion'

A few days ago, an older couple whose house was flooded called from Ahrweiler. They said they had managed to rescue their 14-year-old cat who was ill, but they did not have access to medication or special food. Once again, the animal rescuers immediately set off to bring the much-needed supplies and the couple did not have to pay a thing. "We will never forget the emotion when the lady opened her door which was completely destroyed. She allowed us to publish the pictures so that people can see how dire the situation is." 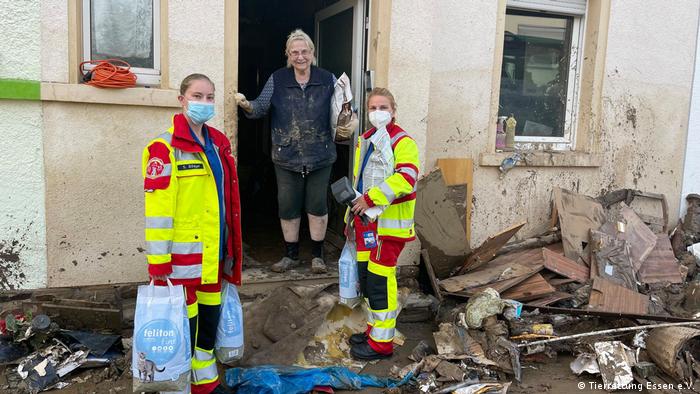 The exhausted animal rescuers are not likely to get a break for some time as the phone continues to ring off the hook. Many owners are still looking for their pets lost in the floods. A number of stranded animals have been handed over to shelters, but it could be weeks or months before their owners are found, if at all. The shelters are currently overcrowded, not only with cats and dogs, but also homeless birds, turtles and rabbits.

Adapted from a German translation of a Russian text.