Showing solidarity after the floods: People helping people  | Germany | News and in-depth reporting from Berlin and beyond | DW | 24.07.2021

In an emergency, immediate help is double the help. After disastrous floods hit western Germany, volunteers have come from near and far to help with clean up efforts. 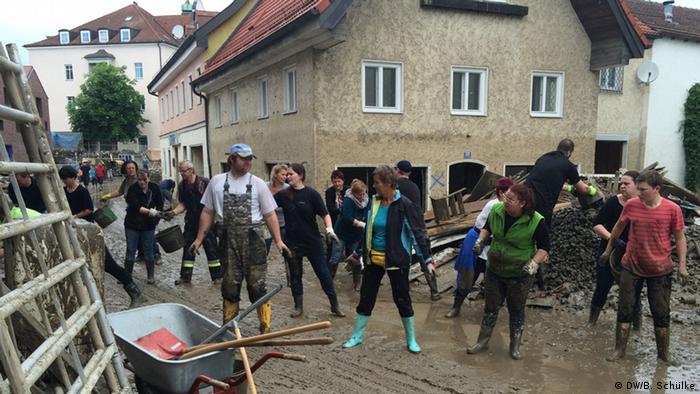 Volunteers help in clean up efforts in Simbach western Germany

Volunteers need help  and their machines need fuel. That's why Thomas Sperber and Marius Gläser got into their tanker truck at four in the morning from Limburg, which lies roughly an hour southeast of the flood-hit Ahr Valley.

Roughly 32,000 liters of diesel slosh around in the tanks behind the driver's cabin, donated by 17 oil traders from Limburg and the surrounding area. They've put the word out on Facebook that they want to distribute it free of charge to everyone in the flooded area who is operating excavators and tractors, to trucks and buses that operate emergency power generators and pumps.

When they opened their improvised fueling station in a parking lot in Remagen not far from Sinzig, which was badly hit by the flood, Rasim Cervidaku is one of the first "customers" to roll up with his wheel loader and three empty barrels. The landscape gardener from Sinzig has been working almost non-stop with his work tool since the flood disaster a week ago.

He was lucky, he told DW, because his house and business were located on higher ground and were not affected. Nevertheless, it was very clear to him and his family that they want to support the flood victims with all they have. His son is taking part in the clean-up work with the company's own excavator. 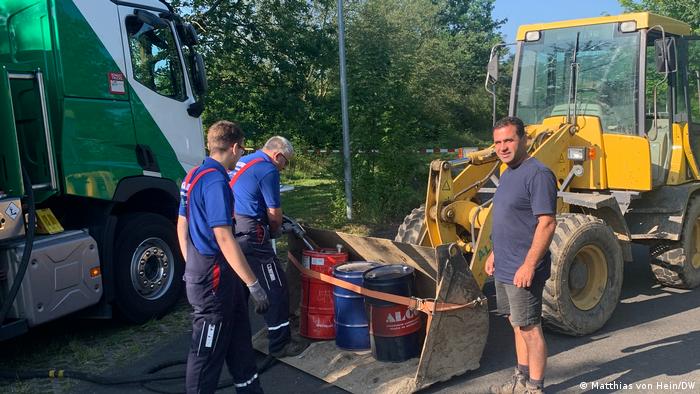 Private individuals are providing assistance after catastrophic floods in Ahr

People amazed at outpouring of help

"The greatest help is provided by the local people," observed the Berlin disaster researcher Martin Voss. "First of all, from those who are not yet so affected so that they can still do something: They lend a hand."

Solidarity is the slogan of the hour in the flooded areas. The solidarity, the willingness to help is enormous, as too is the effort put into going beyond the state or organizations to get involved.

Many, who otherwise perceive people as selfish and competitive, are amazed at the huge wave of helpfulness. However, research has shown for decades that people in disaster situations genuinely show solidarity, says Martin Voss of DW. "At the moment when people get into this kind of emergency,  the primary behavior clearly becomes being their for another."

It doesn't always have to go as far as Hubert Schilles did. The man in his mid-sixties from an hour west in the Eifel region had unblocked the drain of a dam with his 30 ton excavator, risking his life in the process. He saved more than 10,000 people directly affected by a possible dam breach. 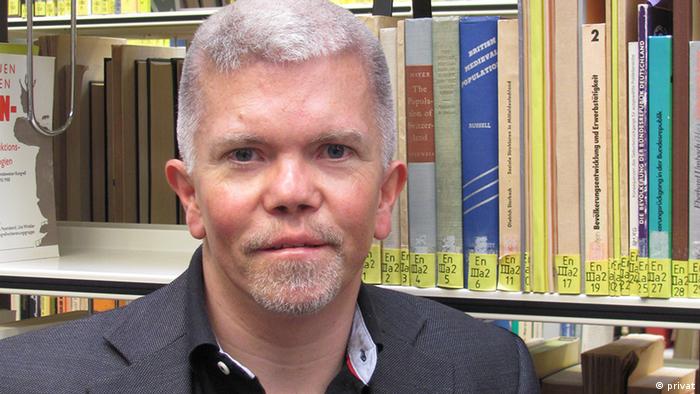 Martin Voss, disaster researcher at the Free University in Berlin

A 300 kilometer journey - with an excavator

Karsten Steiner is also a man of the hour. The strong man sits at the wheel of his heavy excavator in Sinzig. The gripper arms first lift a Mercedes limousine that has been totaled to the side. Then they reach into the mud again and a mound of garbage piled meters high on the side of the road and heave the debris into a waiting truck.

Three days after the disaster, Steiner had driven his excavator onto his low-loader nearly 300 kilometers north of here to help, at his own expense. When asked the loss of earnings, Steiner only replies: "Look around: the people here are much worse off than me." Then, unmoved, he clears a piece of the road again. Steiner wants to help out in Sinzig for a few more days.

"The doers are the real heroes in this situation," says disaster researcher, Wolf Dombrowsky. "Those who get started right away and get things done. And the best are also those who coordinate and divide up the tasks, telling the others 'you do this, you do that.'"

The Bremen-based disaster researcher emphasizes how much the normal competitive mechanisms in society are overridden in a disaster situation. "Here the people are stripped of everything. And anyone who helps is a hero." 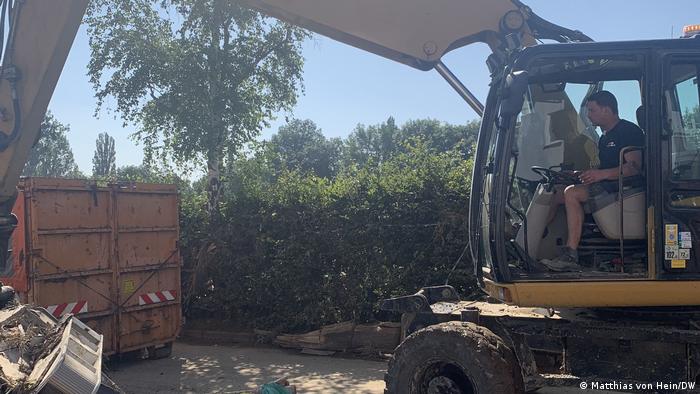 Volunteers help deal with the aftermath of the floods in Ahr, western Germany

Out of service fire trucks reactivated

Max Diron is one of these heroes. The man in his late twenties drives up to the free refueling campaign in the town of Remagen in an old private fire truck. Diron deals with these types of vintage vehicles up the road in Bonn. The all-wheel drive vehicles are popular as motorhomes with people who want to travel to remote mountain regions off the beaten path.

Now Diron's home region in the Ahr Valley has been affected by the floods and the old fire engines are suddenly back on a rescue mission. The classic car dealer had already been carrying out rescue operations on the night of the disaster. "My mother-in-law called me at 3.30 a.m.," he says.

He now sets out every afternoon at around 5 p.m. with a group of fellow volunteers for what he calls "after-work help." Brooms, shovels, wheelbarrows, rubber boats and whatever else is needed in the crisis area, plus plenty of motivation.

"We have already finished 12 houses," says Diron. And notes that his old fire engines could also cope with roads in which the more modern trucks fromthe technical relief organization, THW, got stuck. Which is why he wants to drive his "after-work help" crew with an emergency power generator and water pump to particularly isolated villages this afternoon. 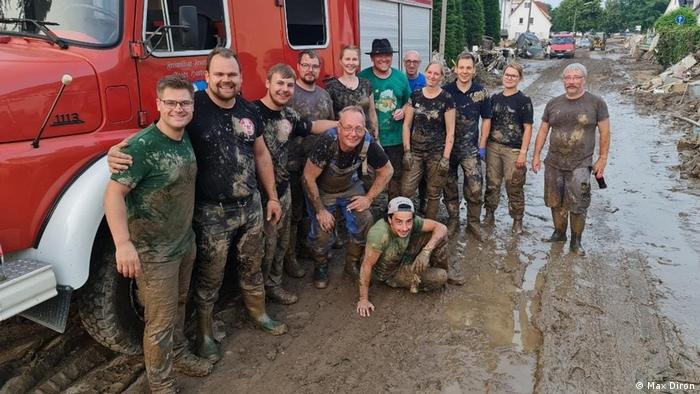 A group of volunteers pose in front of a fire truck in Ahr, a town severely affected by the floods

Taking the shuttle bus to the relief effort

Public buses have also started shuttling up to 1,000 volunteers to the area every day starting at 7 a.m. Organizer Marc Ulrich from Bad-Neuenahr-Ahrweiler, which was badly affected, quickly realized after the disaster that many people want to help. To avoid traffic chaos that could prevent rescue and evacuation vehicles from getting through, he launched a plan to use shuttle buses and put the word out on Facebook.

On the trips to the mission, the volunteers are briefed on the situation. "Do not go into empty houses uninvited," is one of the guidelines, or "Listen to people when they want to talk. But don't start a conversation with them." 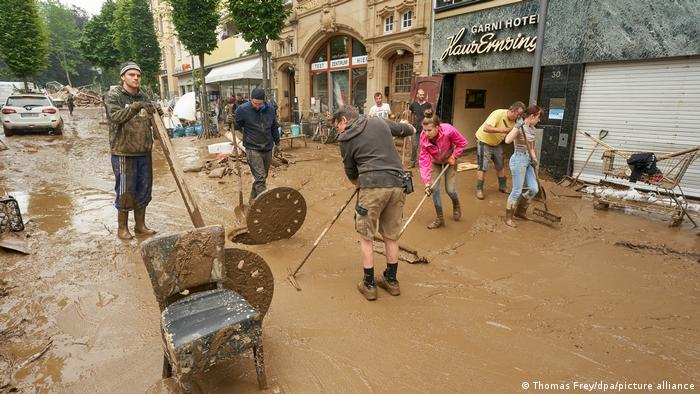 When the willingness to help wears off

Ulrich worries how long people will be so willing to help and other issues will soon displace this disaster.

Dombrowsky also expects private aid operations to decline. "The people who go there and help mostly have jobs. They have families, children, relatives. And this wonderful feeling of being a much needed hero and being enormously useful will reach a saturation point. And then comes the feeling, that I have to go back to work or my family needs me too. Or that my strength is waning."

At that point, at least, the professional aid effort has to step up, says Dombrowsky. "But then even the worst is over and spontaneous help is no longer necessary." That's when the reconstruction phase begins.