As Germany comes to grips with the vast devastation and loss of life caused by the worst floods in decades, the government has offered more than €300 million in aid including help for infrastructure and small businesses. 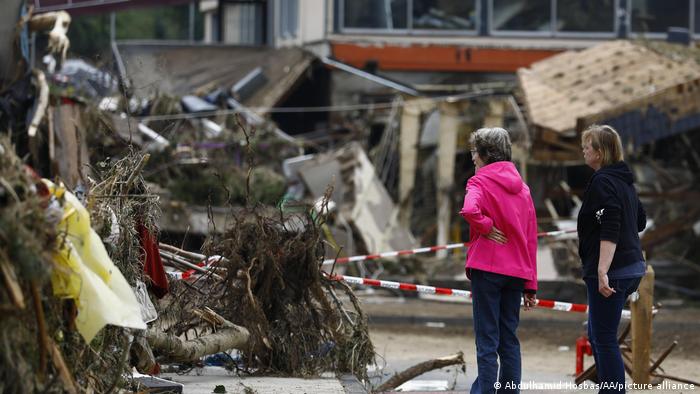 Many homes in Ahrweiler, one of the worst-hit regions, have been reduced to a tangle of debris

Speaking to newspaper Bild am Sonntag, German Finance Minister Olaf Scholz said he would propose a package of immediate aid at a cabinet meeting next week, adding that the help will be "quick, generous and unbureaucratic."

Scholz said more than €300 million ($354 million) will be needed for those affected in the two hardest-hit states: Rhineland-Palatinate and North Rhine-Westphalia in western Germany.

The announcement came as German Chancellor Angela Merkel travelled to the village of Schuld in Rhineland-Palatinate, where the swollen Ahr river swept away houses and left debris piled high in the streets. 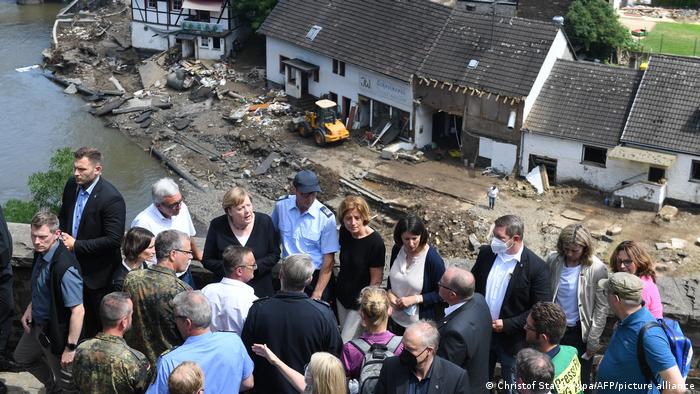 Scholz also said that officials must start setting up a reconstruction program to rebuild damaged houses, streets, bridges and other infrastructure, which from experience with previous flooding would likely tally in the billions of euros. Scholz said a "national show of strength" was needed to deal with the immense loss and damage.

German Economy Minister Peter Altmaier has also proposed assistance of up to €10,000 for individual businesses severely impacted by the flooding and the coronavirus pandemic.

It is not just Germany that has been struck by the country's worst floods in decades, which have killed more than 150 people with many still missing. Neighboring Belgium, where more than 20 people have died, as well as the Netherlands, Luxembourg and Switzerland are also affected.

Israeli President Isaac Herzog said he had sent a letter to his German counterpart, Frank-Walter Steinmeier, expressing condolences for German residents killed in the lethal floods that hit Western Europe, and offering any assistance Israel can provide.

"I agree with the president of Germany, that the challenge of global warming, which contributed to this calamity, requires us all to make a special effort. I stated that we would be willing to help in any way," Herzog said.

On a visit to eastern Belgium, which has been badly affected by the flooding, von der Leyen said EU solidarity went beyond borders.

"Europe is with you. We share your grief. We will help you to rebuild," von der Leyen said as she joined Belgian Prime Minister Alexander De Croo in the towns of Rochefort and Pepinster.

Earlier this week, in response to a Belgian request, the EU activated its Civil Protection Mechanism to support local flood rescue teams.

In a press release, the EU Commission said that a flood rescue team and a helicopter have been mobilized from France to assist with local rescue efforts in Belgium, mostly in flooded areas around the city of Liege. Italy and Austria have also offered flood rescue teams.

In Germany, aid agencies and state governments have all chipped in by setting up hotlines and emergency aid funds to which the public can donate money as well as clothes and other necessities.

The state premier of Rhineland-Palatinate, Malu Dreyer, said in a press release announcing a new donations account that the state had experienced a wave of solidarity and helpfulness in the wake of the natural disaster.

In a joint announcement on Friday, the organizations said they intend to set up an aid fund with an initial commitment of €3 million.

"The images of the floods and devastation, the full extent of this catastrophe, leave us affected and appalled," the groups said in a joint statement. "Our thoughts go with the relatives of the deceased, the injured and the many people in need."

In addition, the DFB has also contacted the European Football Union UEFA, which has also agreed to support those affected.