Companies, sports clubs, private citizens: People from all walks of life want to help the victims. They're collecting clothes and arranging for whatever help is needed. An overview of the solidarity after the floods. Equipment to pump water from flooded homes is in high demand

People across Germany have been deeply moved by the images and stories from the areas in western Germany hit hard by the floods, and many are doing what they can to help out. And it's not just private citizens offering up their homes, donating clothes, blankets and towels or arranging for power generators and food — businesses are also pitching in. Here's an overview: 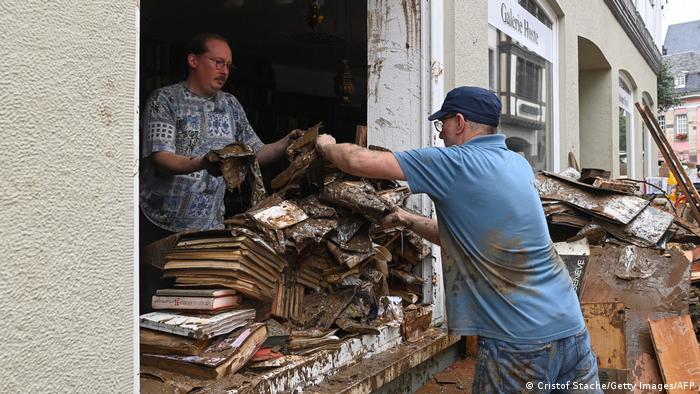 Neighbors have been helping victims clear their homes of debris, like here in Bad Neuenahr-Ahrweiler

Those people who own emergency generators — and who haven't been affected by the floods themselves — have probably already lent them out to their neighbors. Those who don't have any technical equipment have been simply walking through the flooded areas with rolls, cake or coffee as a little pick-me-up for their neighbors. In some places, bakeries are even driving around handing out pastries. Other businesses are delivering charged power banks so people can top up their phones.

People have also been organizing aid efforts online. In a new Facebook group "Hochwasser Hilfe Lohmar 2021" ("Help for flood victims in Lohmar 2021"), for example, people from the town of Lohmar, northeast of Bonn, and surrounding towns are listing what help they can offer or what they are looking for: tractors with trailers, clothes for adults and children, furniture ― or simply helping hands to clear out basements.

Shovels, submersible pumps and high-capacity flood drying equipment are needed in many places — and German DYI chains Obi, Bauhaus, Hornbach and Toom are just the places to provide these much sought-after goods. But the companies aren't taking advantage of the situation. Obi, for one, has said that those affected by the floods can borrow equipment free of charge. And people who want to donate drying equipment or pumps can take them to any Obi store, where they will receive a voucher worth the price of a comparable new device. Obi will take these donations and transfer them to the flood-affected regions. Other DIY stores are also offering large discount campaigns for people affected by the floods.

After the floods, what's left?

The headquarters of the world-famous candy company outside Bonn has served as a collection point for donations in-kind, with people dropping off children's clothing, blankets, dog food and toys right at the main gate. The rush was so great, however, that Haribo was forced to ask people to stop bringing items after just one day of the campaign. Employees are now coordinating the storage and distribution of the donations, Haribo stated.

Some families have lost their entire house in the flood, or will not be able to return for some time. Those who haven't found a place to stay with friends or relatives can contact various hotel chains for a room. The Hilton Cologne is providing rooms free of charge, while HRS Group is offering discounted prices for flood victims who need a roof over their heads.

Firefighters, rescue services and other helpers need to keep up their strength. That's why many grocery stores and discount chains have donated food, in addition to money. Firefighters in Wuppertal thanked the supermarket chain Kaufland and others for their food and drink donations. "We're seeing a lot of gratefulness and cooperation in Wuppertal! Great that so many are helping!" the city's fire department wrote on Twitter on Friday.

Parents whose basements are flooded or who have lost everything might not have a lot of time for child care right now. In order to "get the children's minds off things," as soccer coach Jose De Almeida Friessem put it, he has offered a free practice session at his Black & White Soccer School in Troisdorf, near Bonn. "Maybe then they will be a little distracted from their parents' worries," he said.

Whether locally or through larger foundations, those who want to help out financially can do so through many channels. Aktion Deutschland Hilft, a coalition of several reputable aid organizations, is running a major fundraising campaign. The initiative shared its donation page in a tweet and said that several of its coalition partners were already out helping in the affected regions.

This article has been translated from German​​​​​​​

Over 130 people have died in western Germany, as thousands of emergency workers continue rescue and repair efforts throughout the region.