Belgians pick up the pieces after deadly floods | Europe | News and current affairs from around the continent | DW | 17.07.2021

Belgians pick up the pieces after deadly floods

With more than 25 dead after flooding in eastern Belgium, DW spoke with residents struggling to come to terms with the devastation and move on in the town of Pepinster.

The Belgian town of Pepinster, southeast of Liege, has just woken up from a nightmare. Wading through knee-high brown water with his wife and son, local resident Paul Brasseur looked back at what was left of their family home. "We're alive and that's all that matters — not everyone was so lucky," he said.

The Brasseurs' house on the banks of a tributary of the Meuse River was among dozens engulfed by floodwaters a few nights ago. "The water started coming in and we realized we weren't safe downstairs so we went up — but around 6 a.m. we realized even the second floor was going to go under," Brasseur told DW. "We managed to get out and get onto the roof but we had to leave our dog behind. Then we moved between roofs to find somewhere safe. We were there for nine hours before we were finally rescued." 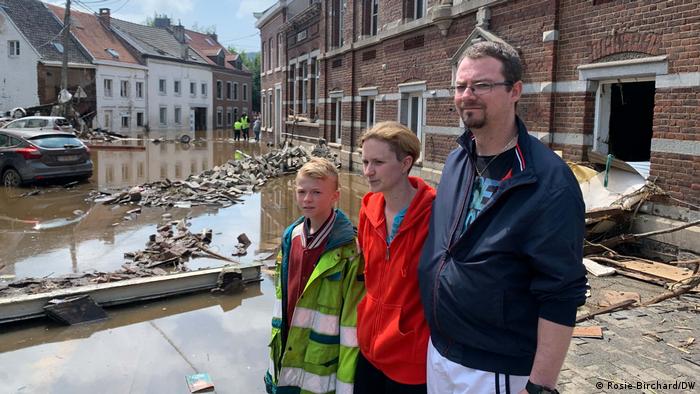 Neighbors swept away as houses collapsed

Brasseur was close to tears as he recounted his family's ordeal. "I saw the houses on the other side of the river collapsing. I saw people falling out and getting washed away in the river. One woman had her hands joined in prayer as she fell into the water," he said.

The supermarket worker was still in disbelief. "There were 6 meters [20 feet] of water. Six meters — can you imagine?" he said. Brasseur has lived in Pepinster since he was 10 years old and has seen floods before, "but they were nothing like this — nothing." 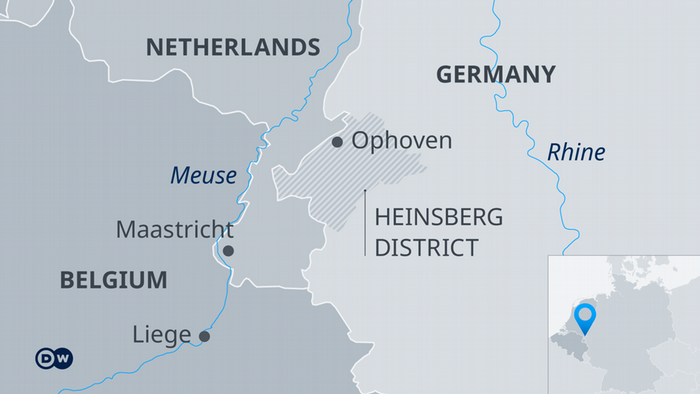 Dozens dead and many more missing

Pepinster, in the east of Belgium — around 50 kilometers (31 miles) from the German border — was destroyed by the flash flooding that wrought devastation in both countries starting on July 14. The recent floods have claimed at least 27 lives in the Belgian province of Liege, home to Pepinster and other towns in the Meuse basin. Some 90 people in the province are currently still missing, local officials told DW.

With the worst of the flooding now over and the sun shining down on the quiet town, the people of Pepinster are beginning to pick up the pieces. The main road is unrecognizable — not a single shop or house at ground level has been spared. The cobbled street is hidden beneath layers of dirt and debris and the street is strewn with people's belongings and goods from local stores, all drenched in mud and far beyond repair. 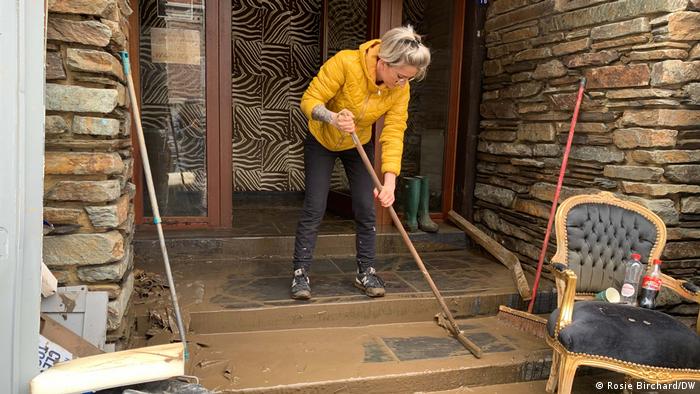 Jennifer Talmas opened her hair salon only two weeks ago

Jennifer Talmas only opened her hair salon two weeks ago. Now, the plush salon chairs lie on the ground outside and a thick layer of sludge covers the salon floor. "We'll be talking to our insurance," she said. "We just have to get on with it. What else can we do?"

Others were less sanguine. Sweeping dirty water out of her front door and piling up the ruined toys, furniture and clothes from the ground floor of her house, mother of four Hanal said she was outraged. "How could they not have warned us properly?" she said.

Wearing sturdy rain boots below their shirts and suit trousers, Belgian Prime Minister Alexander De Croo and European Commission President Ursula von der Leyen arrived from Brussels, the home of the EU institutions, to show their support on Saturday. The locals were mostly uninterested and carried on with their excavation efforts.

Von der Leyen, however, had a message for them: "Europe is with you. In these difficult moments, your grief is our grief and we will come out of this together," she told reporters between conversations with local business owners and residents. 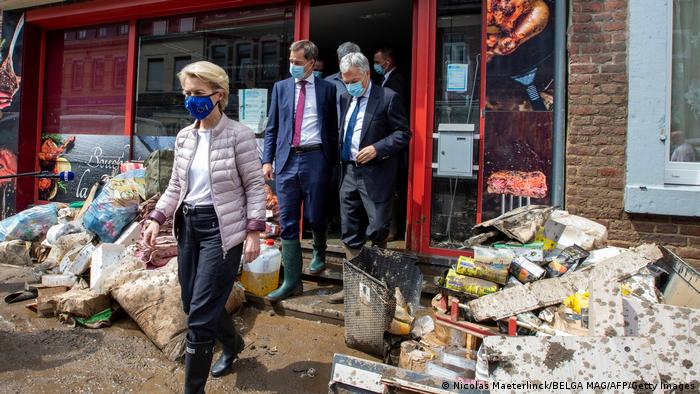 Earlier this week, Belgium activated the European Union's Civil Protection Mechanism to ask for help dealing with the floods. A European Commission spokesman told DW that the Netherlands, France, Italy and Austria have so far sent support to Belgium in the form of rescue teams, boats and helicopters.

'How exceptional will phenomena like this be in the future?'

Looking out on the destruction, Prime Minister De Croo said his government's priority was to give people their lives back and restore hope and dignity to the town. But he also spoke of the future and dealing with the climate crisis.

"It's clear that we're being confronted with more extreme weather phenomena," he told reporters. "Here we're confronted with something that happens every 200 years. This is very exceptional — but the whole question of course is how exceptional will phenomena like this be in the future? That analysis needs to be done in a very profound way."

Herve Jamar, the governor of the province of Liege, told DW there was an enormous amount of work to do to restore the town and others in the region, with bridges, buildings and power infrastructure all badly damaged.

Meanwhile, local police have warned there were still imminent dangers in the town. In the worst hit neighborhood by the river, officers waded through water to put up signs asking people to stay away from several houses still at risk of collapse. Other officers used the loudspeaker of their police van to spread public service announcement in the streets: "Attention: There is clean drinking water available outside the police station," they said. 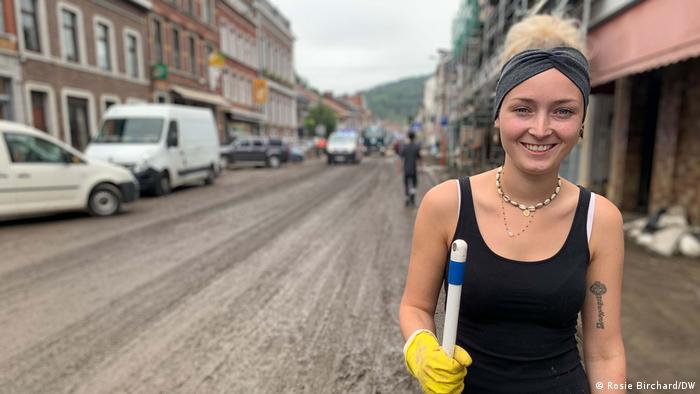 Locals like Oceane Nourdinjer came out to help their neighbors

As well as water, local volunteers in luminous yellow vests have piled the stone city hall steps high with toilet paper, sanitary towels, clothes, biscuits and other products donated to help those impacted by floods. It's a clean oasis in the surrounding muddy mess.

"There's an amazing spirit of solidarity in Pepinster," volunteer Oceane Nourdinjer told DW. "That's what people in Pepinster are like. We all come together and everyone helps each other," she said. Nourdinjer lives in the hills by Pepinster, where lush green grass surrounds white houses entirely untouched by flooding. She said other residents from the area have all come down to lend a hand. "After all it's our Pepinster — it's our home," she said.

Germany: After the floods, what's left?

Despite losing the house they've lived in for 20 years and all their belongings, Paul Brasseur and his wife, Madeline, were moved to tears of gratitude when speaking of the community spirit and local support they've received. "This is the time you see how selfless people can be," Paul Brasseur said.

Brasseur and his family are currently living in a hotel. They have good insurance and hope they will eventually be able to reconstruct their life. "We're living minute by minute. We have no idea how things will go but we have a whole network of friends around us who are doing everything they can to help us. All things considered, we're incredibly lucky. We won't give up," he said.

Quaint villages of half-timbered houses scattered across narrow valleys have now been destroyed. The extent of damage caused by the floods can been seen in these before and after images.