Annegret Kramp-Karrenbauer has condemned the US and Turkey for endangering the stability of the NATO alliance. She also called on Germany to be more assertive in helping solve international conflicts. 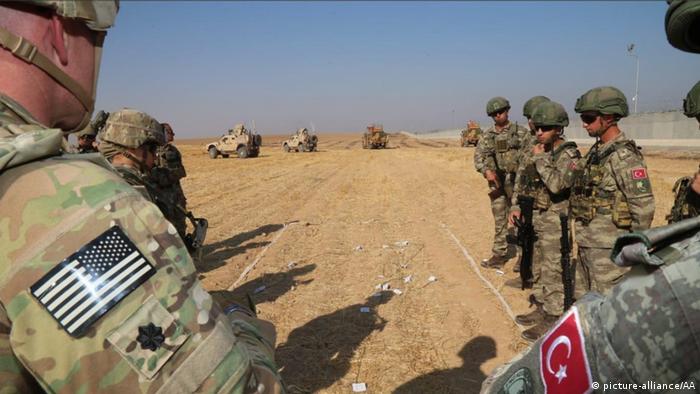 German Defense Minister Annegret Kramp-Karrenbauer on Saturday condemned the Turkish incursion into northern Syria, while questioning the reliability of the US as a strategic partner.

Kramp-Karrenbauer said that US forces withdrawing from northern Syria and leaving Kurdish forces behind would be a "devastating" long-term development for NATO.

"That sets in motion a real question about the reliability of our strongest alliance partner in the world," said Kramp-Karrenbauer at a Christian Social Union (CSU) party summit in Munich.

Directly addressing Turkey's Syria offensive, Kramp-Karrenbauer said that a NATO member violating the border of a neighboring country by force "endangers the foundation of the post-war order." 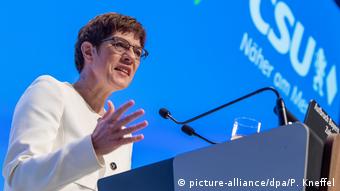 Kramp-Karrenbauer spoke at summit of the CSU, the CDU's Bavarian sister party

Germany needs to do more

"When was the last time that we as Germany, and we, the CDU and CSU, actually made a substantive proposal on these international issues?" said Kramp-Karrenbauer.

"We are strong, it is incumbent upon us, and at some point we have to finally give our own political answers."

Kramp-Karrenbauer added that Germany can build credibility as a strategic partner by adhering to NATO's request that members spend 2% of gross domestic product (GDP) on defense. The defense minister has pushed for a spending increase since taking office in July.

The US has demanded that NATO members reach the 2% spending mark by 2024. US President Donald Trump has threatened to take the US out of NATO if partners do not spend more on defense.

For decades, Germany's Defense Ministry has been plagued by scandals, from far-right extremists in the ranks to broken military equipment. Can Merkel's heir apparent Annegret Kramp-Karrenbauer improve its image? (17.07.2019)