Transport Minister Andreas Scheuer says the vehicles represent progress and will alleviate air pollution. Critics call them a plague that will only exacerbate traffic congestion and endanger pedestrians. 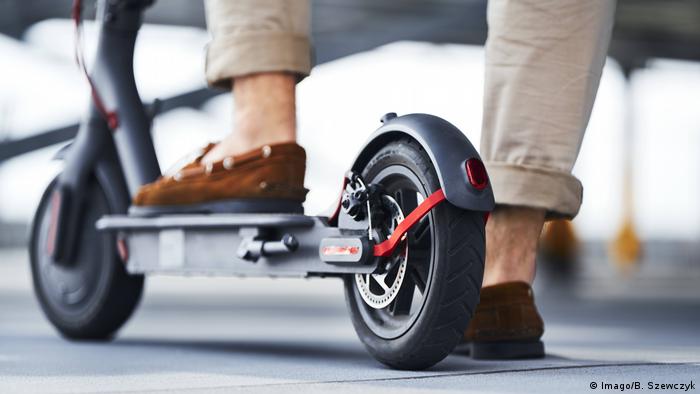 Germany's Transport Minister Andreas Scheuer announced the Cabinet's approval of the use of e-scooters in Germany on Wednesday, saying: "We want new, modern approaches to environmentally friendly and clean mobility in our cities. E-scooters have enormous potential!"

He added that by approving his plan to make the electronic vehicles street-legal, the Cabinet had, "cleared the path for a mobile future, and at the same time, for safety on our streets."

Previously, such vehicles had been illegal as they did not fit any of Germany's existing traffic laws. With Cabinet approval the final decision as to allowing their use will now be up to the Bundesrat, Germany's upper house of parliament. The government says approval could come as soon as May 17.

The EU approved the use of e-scooters on European streets in January 2016.

The Cabinet's proposal would allow e-scooters with a maximum top speed of 12 kilometers per hour (7.5 miles per hour) to operate on sidewalks, bike paths and in pedestrian zones. Such scooters could be operated by anyone 12 years of age or older.

E-scooters with a top speed of 20 kph would be limited to operation on designated bike paths or bike lanes. The minimum operator age for such vehicles would be 14.

Proponents of e-scooters argue that they will offer citizens flexible mobility options and help cut emissions. Cashing in big on e-mobility

E-scooters, which got their start in Silicon Valley, have been introduced into a number of cities around the world over the past two years. They operate on the basis of ride-, or bike-sharing business models in which customers can unlock the vehicle via an app on their smartphone and then pay a few cents an hour for use.

The model is no coincidence since the largest e-scooter companies, such as Lime and Bird, are owned and run by companies like Uber, and Google parent company Alphabet.

Those companies, as well as German competitors like Flash and Tier, have been showered with hundreds of millions of euros by venture capitalists eager to get in on the trend. McKinsey, a management consulting firm, suggests that the European market could be worth up to €150 billion ($134 billion) by 2030.

Despite the enthusiasm, e-scooters have a lot of critics, too, as experience in many cities has shown they create a lot of problems.

For instance, Consumer Reports, a US watchdog group, says that it has recorded more than 1,500 scooter-related accidents in the US since 2017. Worldwide, a number of riders have either seriously injured or killed themselves or others on the vehicles. 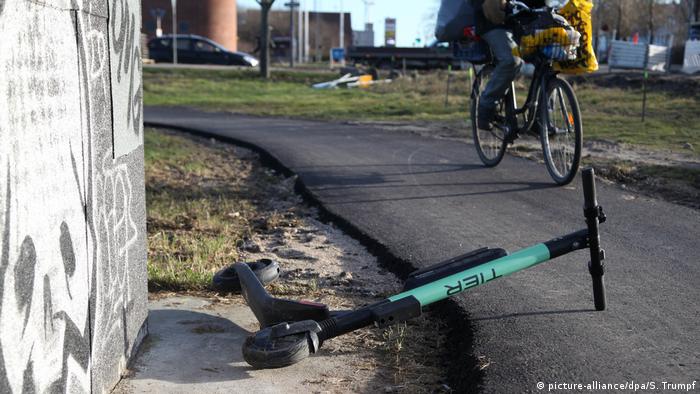 Another massive problem is the fact that since they have no docking stations — unlike shared bikes — e-scooters tend to be abandoned when the rider reaches his or her destination, often on the sidewalk or in front of building entrances.

Vandalism and theft are also an issue, the latter being compounded by a trend in the US of people throwing large numbers of the scooters into lakes and other water ways, thus creating environmental problems.

Another problem is a general exacerbation of already outmoded infrastructure, which will certainly be the case in Germany, where bicycles, cars and pedestrians are forced to share tight quarters.

Siegfried Brockmann of UDV, which researches accidents for German insurers, was highly critical of Wednesday's Cabinet decision, telling the newspaper Neue Osnabrücker Zeitung, "If e-scooters are allowed on sidewalks it will lead to significantly more accidents."

He said that scooters travelling at 12 kph would be moving "at least twice as fast as pedestrians." He added that e-scooters, "would be a great danger to pedestrians, needlessly disadvantaging them in areas specifically designed to protect them."

Brockmann said that allowing e-scooters on sidewalks would create a dangerous precedent, pointing out that it would make it harder for the government to prohibit advocates for other new vehicles, such as one-wheelers and hoverboards, from claiming a similar right. He therefore strongly urged the Bundesrat to reject Transport Minister Scheuer's plan.

Facing cluttered sidewalks, reckless drivers and now the first known fatality in Europe, cities are threatening to kill the e-scooter. But fans of the e-mobility option say the criticism is misplaced.

German lawmakers greenlit a bill that would allow for some autonomous vehicles to hit public roads as early as next year. But those looking for a driverless joyride on the Autobahn will still have to wait.