German behind short-lived closure of @realDonaldTrump

After Donald Trump's Twitter account was suspended for 11 minutes this month, the hunt was on to find the employee who did it. A German man and former Twitter contractor has come forward with his side of the story. 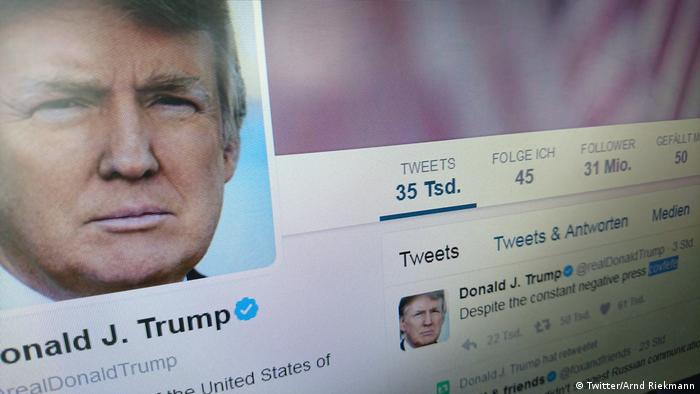 It was the 11 minutes heard around the world — on November 2, US President Donald Trump's Twitter account was temporarily taken down by an employee on his last day of work.

In an interview published Wednesday, a young German man named Bahtiyar Duysak came forward as the now-former-Twitter worker responsible for the move.

Speaking with technology news website TechCrunch, Duysak said he considered it a "mistake" and never thought Trump's account would be deactivated.

"There are millions of people who would take actions against him if they had the possibility. In my case, it was just random," Duysak said in a video of the interview, clad in a gray sweater emblazoned with the American flag.

In a separate report with two anonymous sources, BuzzFeed News also reported that Duysak was responsible for the Trump account suspension. Twitter did not confirm whether Duysak was the employee in question.

'I didn't hack anyone'

As a temporary contractor at Twitter's headquarters in San Francisco, Duysak was assigned to the social media giant's customer support department.

Employees field alerts that come in when users report offensive tweets, harassment and other suspected infringements of Twitter's policies. The department then determines what further steps should be taken, TechCrunch said in its report.

Trump's @realdonaldtrump account has been repeatedly reported for allegedly violating Twitter's Terms of Service with his controversial tweets. Most recently, Trump has come under criticism for retweeting posts by Britain First, a small, anti-Muslim group in the UK.

Towards the end of his last day at Twitter, Duysak received an alert from someone who had reported Trump's account. What happened next wasn't planned, he said.

"As a final, throwaway gesture, he put the wheels in motion to deactivate it. Then he closed his computer and left the building," TechCrunch wrote.

The site did not elaborate on the procedure or why the account was deactivated hours after Duysak took action.

"I didn't hack anyone. I didn't do anything which I wasn't authorized to do," the ex-Twitter employee said.

Back home in Germany, where the 20-something with Turkish roots was born and raised, Duysak said he decided to come forward in an effort to share his side of the story before other media outlets unveiled his identity.

The temporary deactivation of Trump's account earlier this month raised concerns over how much power Twitter employees have over high-profile accounts. Some raised concerns that such suspensions could spark international incidents.

In a statement on Wednesday, Twitter said: "We have taken a number of steps to keep an incident like this from happening again."

The US president has circulated videos from a far-right British group on his Twitter account. The incident sparked outrage in the UK, with the British government condemning Donald Trump's actions as "wrong." (29.11.2017)

Russia has been accused of trying to manipulate the outcome of the 2016 US presidential election. Twitter has taken action against two Russian agencies "effective immediately." (26.10.2017)