An employee on his or her last day of work at Twitter is believed responsible for briefly downing Donald Trump's account. The social media platform is Trump's preferred medium for attacking foes and promoting policy. 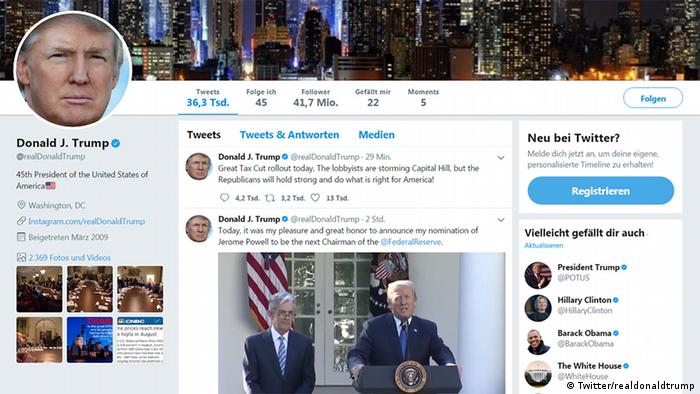 Social media giant Twitter says an employee on his or her last day with the company is responsible for briefly deactivating US President Donald Trump's Twitter account on Thursday evening.

Those attempting to visit Trump's account @realdonaldtrump around 7:00 p.m. (2300 UTC), were greeted with an error message "Sorry, that page doesn't exist."

The account was quickly restored. Twitter said it was conducting an internal review of the incident and would work to prevent future outages:

Donald Trump has over 41 million followers on Twitter, making extensive use of the social media platform to promote his policies and attack his opponents - often in so-called "tweetstorms."

One such tirade targeted Germany and its trade surplus with the US.

Trump did not tweet about his account's sudden disappearance. His first tweet after his account came back online called on US Republicans to support tax reform.

Free speech advocates in the US have sued President Donald Trump for blocking those who criticize him online. They argue his account is a public forum that he - as a government official - cannot bar people from. (12.07.2017)

In a move worthy of the former businessman himself, former spy Valerie Plame Wilson is trying to purchase a controlling stake in Twitter so she can ban the US president from the platform - and maybe save the world. (24.08.2017)

A judge said Elon Musk has until October 28 to finalize his purchase of Twitter. The tech giant has said dropping its lawsuit against Musk could open the door for "further mischief and delay."