A German peace award has been granted to the group Academics for Peace for their protest of Turkish military operations against Kurds. The Turkish government has labeled the scholars supporters of "terrorism." 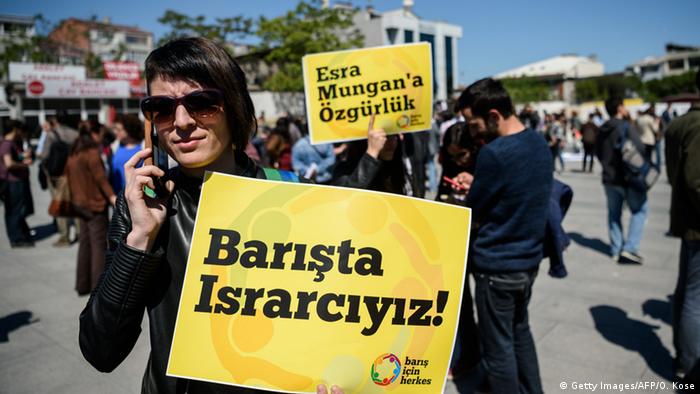 Protesters holds a sign that says "We insist on peace"

A group of more than 1,000 academics calling for an end of Turkish state violence against the country's Kurdish population have won the prestigious Aachen Peace Award.

Academics for Peace, a group of scholars from universities inside and outside of Turkey, came into President Recep Tayyip Erdogan's crosshairs in January after they issued an open letter calling for the state to end ongoing military operations in southeastern Turkey and resume peace negotiations with Kurdish militants.

The 1,128 academics called on the state to "abandon its deliberate massacre and deportation of Kurdish and other peoples in the region" and end human rights violations contrary to Turkish and international law. "We will not be a party to this massacre by remaining silent and demand an immediate end to the violence perpetrated by the state," the open letter said.

The academics were immediately attacked by the ruling Justice and Development Party (AKP) and Erdogan himself, who called on the judiciary to go after the signatories for "treason" and "terrorism" under the country's broad anti-terror laws.

Several signatories have since faced trial, dozens have lost their university jobs, and many have faced threats in another extreme reaction against freedom of speech and thought in Erdogan's increasingly authoritarian Turkey.

The Aachen Peace Award committee cited the response of Erdogan, government agencies and AKP-controlled school administrations as one reason for honoring Academics for Peace with the award.

"The call of Academics for Peace has a special status due to the clarity of the text and the massive backlash of the Turkish state, its organs and the defamatory public reaction," the German selection committee said in a statement.

"Erdogan and his AKP government have created an enormous rift between Turkey and the Kurdish people," the committee added.

The award comes days after Erdogan lashed out at the EU for linking reform of the country's sweeping anti-terrorism laws to visa free travel for Turkish citizens as part of a migrant deal with the bloc. The anti-terror laws have seen journalists, academics, politicians and activists face trial and prison time.

Erdogan's reach to clamp down on all criticism has even reached Germany, where a controversial investigation has been opened against a popular satirist for insulting the Turkish leader.

Since peace talks between the Turkish state and outlawed Kurdistan Workers' Party (PKK) broke down last July, Turkey has been wracked by the worst violence since the dark days of the war in the early 1990s. Hundreds of Turkish soldiers and PKK fighters have been killed in near daily clashes in the southeast.

Armed PKK-affiliated youth groups have erected barricades in several towns in the Kurdish populated southeast. In response, the Turkish military has implemented sweeping open-ended curfews as part of urban military operations that have destroyed several towns. 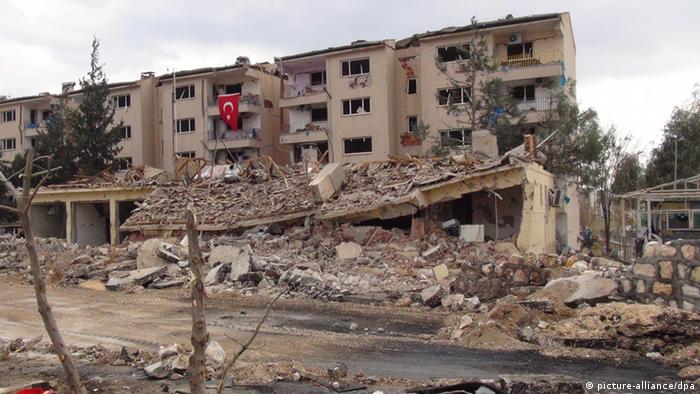 Cities like Nusaybin have been destroyed by Turkish military operations.

Rights groups have criticized the operations as a form of collective punishment against the local population. More than 300 civilians have been killed, including 78 children, since curfews were implemented last August, according to the Turkey Human Rights Foundation. At least 1.5 million civilians have been impacted by the curfews and fighting.

Founded in 2012, Academics for Peace is an initiative of scholars working in or on Turkey that aims to develop a foundation for a sustainable solution to the Kurdish issue in Turkey. The Aachen Peace Award will be granted on September 1.