German Defense Minister Ursula von der Leyen is touring the ranks of the Bundeswehr this summer. But some of the military hardware she is admiring, like the NH90 helicopter, has seen more ground time than flight time. 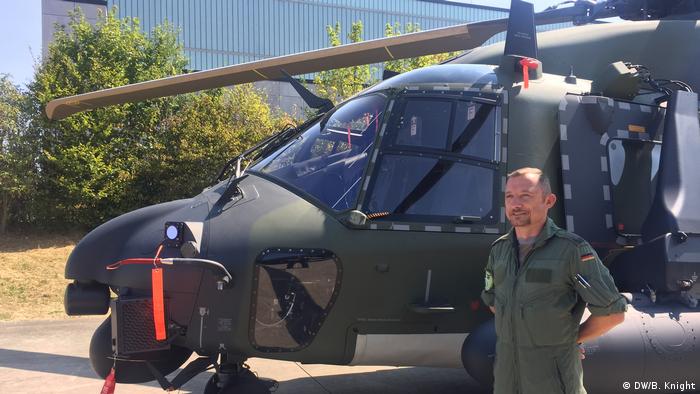 When it comes to German military equipment, the German defense minister is getting a little more defensive.

Ursula von der Leyen, head of the German armed forces, is in the middle of her regular "summer tour" of Germany's military bases to take stock of military hardware and the state of the troops — and perhaps try to revive morale among soldiers hit by negative news reports about technical underpreparedness and shortages of personnel and hardware.

The fifth of these 10 tour stops took von der Leyen to a base in Niederstetten, Baden-Württemberg on Monday, where she watched a display of some NH90 military transport helicopters that have been beset by problems in the past, causing many machines to be grounded and critics to question the effectiveness of Germany's military spending.

Before answering three questions from reporters and then speaking to around 150 soldiers in private, von der Leyen was treated to a complex demonstration of the many purposes of the NH90 transport helicopter. In this case, the display involved six helicopters, four paratroopers, around 60 infantry soldiers, two military vehicles, and a Belgian shepherd dog (which was not to be petted, the minister was told). 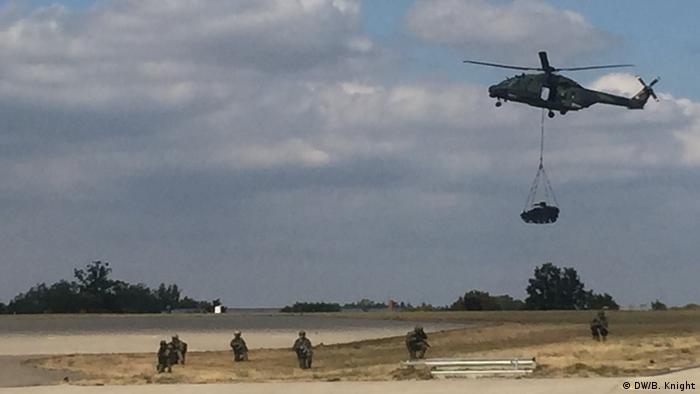 "We can say that the NH90 has proved its worth," von der Leyen said in a brief statement after the show. "It's good to hear from the soldiers that it's a helicopter that is highly respected, and has shown in operations what extraordinary capabilities it has."

Major Andre Benker, Bundeswehr PR officer for the press tour, expanded on the different ways that the helicopters could be used. "They're so important because they can transport personnel, drop off paratroopers, be used for search and rescue, and be used to provide protection to companies they accompany," he said. 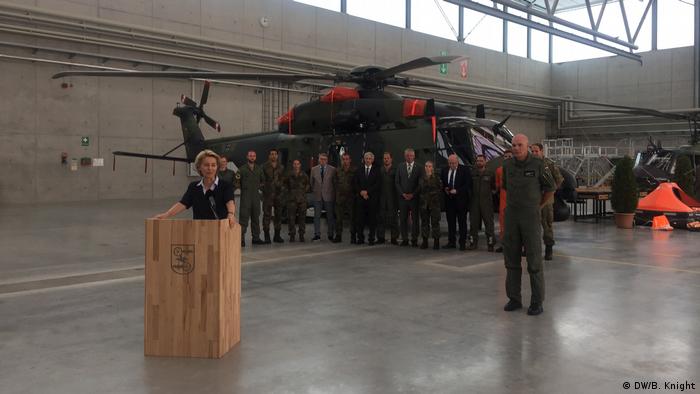 Von der Leyen is touring bases across Germany in the annual summer tour. She stopped at a helicopter transport base in Niederstetten.

In the sky or on the ground?

Monday's praise for the transport chopper stands out, given that the machines and their widely publicized problems have been used to illustrate Germany's military shortfalls.

The NH90, which the Bundeswehr used for rescue operations as part of the United Nations mission in Mali, was briefly grounded in October last year when stress marks were found in the engine of one of the helicopters returning from Africa.

Around the same time, one helicopter was also forced into an emergency landing in the West African nation due to engine failure. All German NH90s were pulled out of Mali this July, along with their Belgian counterparts, when their 16-month deployment ended. 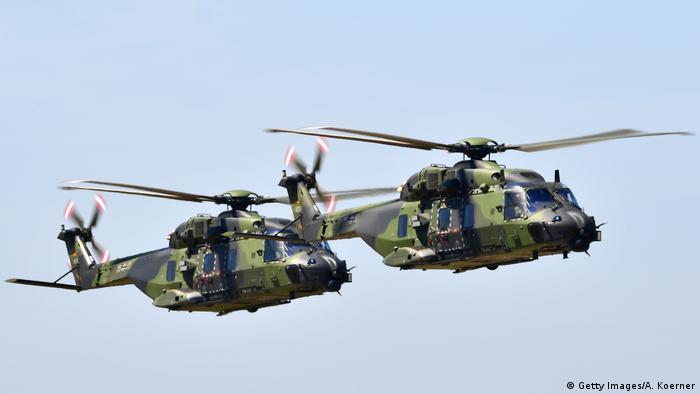 German NH90s were used in a UN mission in Mali

According to regiment spokesman Lars Meinzer, currently around half of the 16 NH90s in Niederstetten are operational at any one time, though that figure changes from day to day. Thanks to a boost in the defense budget, the Niederstetten base is due to get another 18 NH90s by 2021 — though Meinzer said that production delays and increased costs mean it is unlikely that deadline will be met.

Last year, a Bundeswehr Armed Forces Commissioner report showed that out of the 40 NH90s the German military had in stock, only five were operational in 2016. In May the government also admitted that 19 out of 129 Bundeswehr helicopter pilots had lost their flying licenses in 2017 because they had not recorded enough flying hours.

Pilot Sven Messer, pictured above, who flew the NH90 in both Afghanistan and Mali, told DW, "Well, put it this way: when I was there it did everything it was supposed to do."

Built by NHIndustries, a European manufacturing company specifically founded to provide NATO machines, the NH90 has often been considered a problematic case, with several succumbing to technical problems in the machine's 23-year history. First conceived in the early 1990s, the chopper was designed to be constantly adapted for new land and sea missions, but this perennial re-enhancement has led to many complex logistical challenges.

In 2010, a report by a German army expert panel was leaked to the German daily Bild. It listed several problems with the NH90's interior and concluded that it was not well-suited for transporting soldiers, especially if they were carrying heavy equipment. It added the worrying detail that there was not enough room to use the machine gun that was meant to be mounted inside. 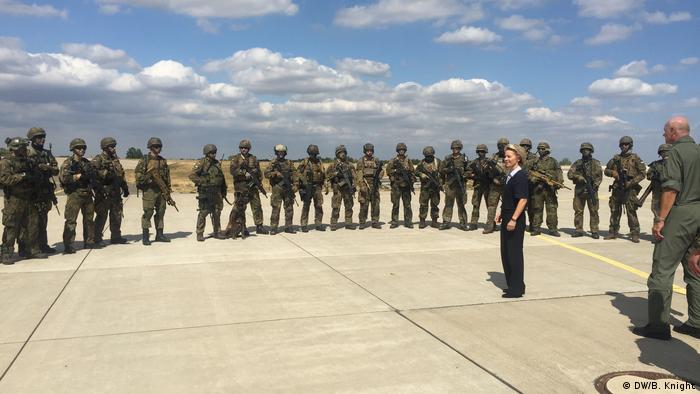 In response, the German Defense Ministry said that the report referred to a prototype, not to the finished model, and said such army-internal developmental criticisms were routine. Nevertheless, both the Australian and Dutch militaries, which use the NH90, have reported engine corrosion.

On Monday, von der Leyen acknowledged that the NH90 had had some "teething troubles," but that she had been told by Niederstetten's regiment commander, Peter Göhringer, that the "situation had improved," especially when it came to the constantly nagging problem of acquiring spare parts.

Several opposition politicians have read the NH90's troubles as a sign of von der Leyen's mismanagement. Green Party defense spokesman Tobias Lindner said last year that the incidents in Mali "showed that the NH90 remains unreliable for use."

"It's longer than we expected," von der Leyen countered on Monday, "but then we also started much later than planned." She argued that, "When a new system is started, we have to slowly improve the infrastructure that goes with it  that means that the technology, the training, the simulators. This successive development and improvement has a purpose."

These delays, Höhn told the socialist newspaper Neues Deutschland this week, have only enriched defense contractors at the expense of taxpayers. Höhn argued that throwing more money at the military did more for arms companies than it did for national security.

But von der Leyen is unlikely to be interested in a socialist's calls for defense cutbacks. The German government has come under pressure from US President Donald Trump over its defense spending, and like many European NATO members, is currently boosting its budget in response to a perceived increased threat from Russia in Eastern Europe.

Chancellor Angela Merkel's conservatives want more money for Germany's military. But their Social Democratic coalition partners have pushed back, warning that Germany should not cave into demands made by Donald Trump. (13.07.2018)

Germany's ruling CDU party has launched a debate on reinstating military conscription and offering young men and women a chance to serve their country in other ways. A recent poll shows Germans are in favor of the idea. (05.08.2018)