Two German army pilots have died after their helicopter crashed near Gao, eastern Mali. At the time of the crash, the helicopter was monitoring "confrontations."

The Tiger type army combat helicopter with two pilots onboard crashed for unknown reasons around 12:20 GMT/UTC about 70 kilometers (43 miles) northeast of Gao in eastern Mali, the Bundeswehr said on Wednesday.

"Onboard the helicopter were two service members, who died in the crash," the Bundeswehr said in a statement.

The German soldiers were taking part in the United Nations peacekeeping mission in Mali (MINUSMA). The German military said UN forces had been dispatched to the crash site to carry out an investigation.

UN Deputy Spokesperson Farhan Haq said that the helicopter had been monitoring ground "confrontations," which means the site of the accident must be secured before MINUSMA teams can access it.

Initial information suggests the crash appeared to be an accident and there were no signs of attack. German news magazine "Der Spiegel" reports that the Bundeswehr suspects a technical fault to have caused the crash.

German President Frank-Walter Steinmeier said that the news of the deaths filled him "with great sadness" and that his thoughts were with the pilots' relatives. He also emphasized that Germany's mission in Mali was "an important contribution towards stabilizing the situation in Mali," according to a press statement. 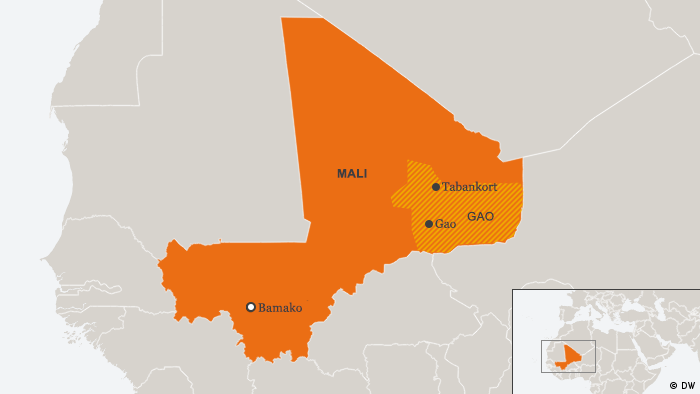 Around 875 German troops are currently taking part in the 13,000 strong MINUSMA mission aimed at stabilizing the country and supporting a peace agreement between the government and rebels.

In January, the German parliament approved an increase in the number of German troops that could be deployed to Mali, upping the number to 1,000.

The decision came after the Netherlands pulled its own helicopters out and Germany decided to fill the gap by deploying NH-90 transport helicopters and Tiger type combat helicopters. The Bundeswehr contingent also includes transport aircraft, refueling aircraft, anti-personnel tanks, and unmanned drones.

In addition to the UN mission, Germany has about 350 soldiers based in the south of the country as part of a EU training mission for the Mali army.

Mali is considered one of the world's most dangerous UN missions, with more than 120 blue helmets killed in the past four years.

The country descended into a spiral of instability in 2012, when ethnic Tuareg rebels and other groups took advantage of a power vacuum left by a military coup in the capital Bamako to take over northern Mali in a bid for independence.

But the rebellion for Tuareg autonomy was quickly hijacked by Islamist militants, including al-Qaeda aligned groups. These were strengthened by a flood of arms, as well as the instability that followed the international intervention that helped oust Libyan strongman Moammar Gadhafi.

The jihadist advances led former colonial power France to intervene in January 2013. France largely pushed back the jihadists but they remain capable of carrying out attacks.

While the French intervention has ended, French soldiers remain as part of a larger counter-terrorism operation in the Sahel region. The UN deployed a peacekeeping mission in July 2013 to replace the French mission.

The June 2015 peace accord was signed between the Malian government and Tuareg rebels and other northern rebel groups, but excludes jihadists.

Gao between fear and hope

A unity conference began in Mali’s capital, Bamako, to kick-start reconciliation as mandated by a peace accord signed in 2015. It's a step towards stabilizing the whole country. But what do Malians in the north hope for? (27.03.2017)

The United Nations has called for additional troops and police amid a worsening security situation in Mali. In May alone, Islamist attacks have killed 12 peacekeepers. (02.06.2016)