German President Joachim Gauck has received a warm welcome at the opening of a new university in Istanbul. But Turkey's prime minister lashed out at him for criticizing his government. 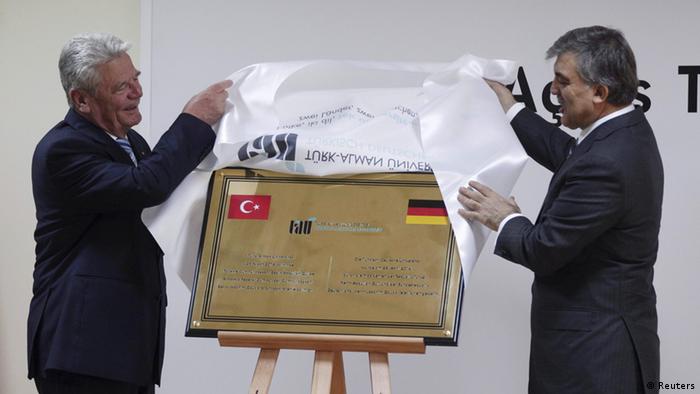 Gauck and Turkish President Abdullah Gul jointly unveiled a plaque marking the opening of the Turkish-German University in Istanbul on Tuesday. Speaking at the ceremony, Gauck said the opening of the institution of higher learning marked the start of a "new chapter" in relations between the scholarly communities of the two countries.

Gul spoke of the already deep ties between the two countries, with about 3 million people of Turkish origin living in Germany and 5 million German tourists visiting Turkey each year. There was no indication of any irritation over Gauck's remarks during a speech at Middle East Technical University on Monday, when the German president had criticized the government of Prime Minister Recep Tayyip Erdogan for its moves to ban the websites Twitter and YouTube earlier this year. The Twitter ban was subsequently struck down by Turkey's top court.

Erdogan, though, clearly took exception to Gauck's remarks, telling reporters following a meeting of lawmakers from his Justice and Development Party (AKP) that he completely rejected the criticism.

"I told the German president that we will never tolerate his interference in the internal affairs of our country," Erdogan said. He also said he believed Gauck, a former Lutheran pastor, still "still sees himself as a cleric."

Gauck is on a four-day state visit to Turkey.

Turkish Prime Minister Recep Tayyip Erdogan has been publicly rebuked by the country's most senior judge. The head of the Constitutional Court hit back at "excessive" government criticism of the court's rulings. (25.04.2014)

The 2-week-old Twitter ban in Turkey has been lifted, and access to the website has been restored. The move follows a constitutional court ruling that the ban breached freedom of expression. (03.04.2014)

Turkey attempts to block YouTube after leaked conversation on Syria

Turkish authorities have moved to block local access to YouTube. The action came after a recording of Turkish officials discussing Syria's security situation was posted on the website. (27.03.2014)