Gadhafi remains elusive as rebels battle against defiant loyalists | World | Breaking news and perspectives from around the globe | DW | 26.08.2011

Fugitive Libyan leader Moammar Gadhafi has delivered another defiant speech, while once again remaining elusive. The battle rages as rebel forces in the capital, Tripoli, seek to eiminate pockets of loyalist resistance. 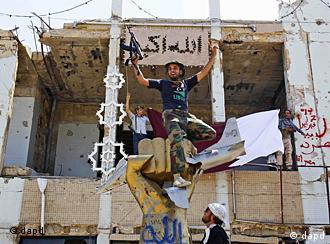 Libya's rebels are still seeking to clear pockets of resistance

Libyan strongman-at-large Moammar Gadhafi urged his forces to fight the rebels, in yet another defiant video broadcast, while rebels continued fighting loyalists in the capital, Tripoli.

"The enemy is delusional, NATO is retreating," he shouted, in a firm and clear voice. "This is the time for victory or a martyr's death," he said, urging Libyans not to leave Tripoli to the "rats."

Meanwhile, fierce fighting continued in the capital, but more than two days after storming his compound and despite being supported by NATO in their search for Gadhafi, rebels have not yet found him. 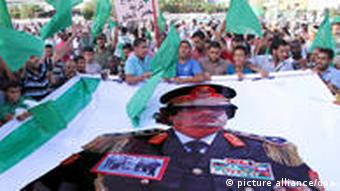 Despite a bounty, Gadhafi's whereabouts are unknown

"I can confirm that NATO is providing intelligence and reconnaissance assets to the NTC to help them track down Colonel Gadhafi and other remnants of the regime," British Defense Minister Liam Fox said earlier on Thursday, referring to "various assets such as military planes."

The rebels have also placed a bounty on Gadhafi's head, offering $2 million (1.4 million euros) to anyone who can deliver them Libya's leader, dead or alive. The NTC also promised to pardon any Gadhafi associate for their part in the regime if they turned in or killed Gadhafi.

Fighting was reported in the southern district close to the notorious prison Abu Salim, where rebels swept from house to house, taking dozens of prisoners.

As well as air support and the reconnaissance aid mentioned by Britain's Fox, there were media reports that elite British troops from the Special Air Service (SAS) were on the ground in Libya supporting the rebels, possibly with the assistance of French counterparts. 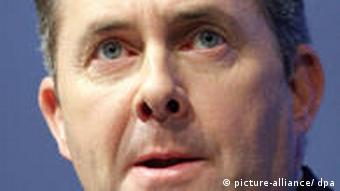 The conservative Daily Telegraph newspaper, quoting UK defense ministry sources, said SAS troops had been dispatched to Libya several weeks ago, and that they played a key role in coordinating the assault on Tripoli. When asked about this by the BBC, Defense Minister Fox said "We never comment about special forces."

AFP subsequently filed a report saying one of their reporters had stumbled across "French and British operatives" in the mostly rebel-held east of the country, saying that they were equipped with telecommunications equipment and were operating out of two shipping containers close to the headquarters of rebel commander Fawzi Bukatif. AFP had not discovered what specific group the camouflage-wearing operatives represented.

The Arab League effectively recognized the Libyan rebels' National Transitional Council (NTC) as the country's legitimate representatives on Thursday, saying the NTC should take up Libya's permanent seat on the council starting at a meeting of Arab ministers on Saturday.

"We agreed that it is time for Libya to take back its legitimate seat and place at the Arab League. The NTC will be the legitimate representative of the Libyan state," the League's Secretary General Nabil Elaraby told reporters in Cairo.

Italy's foreign ministry confirmed on Thursday that four Italian journalists had been freed by forces loyal to Gadhafi, who had kidnapped them on Wednesday. Two of the reporters were working for Italy's best-selling daily, Corriere della Sera, another was writing for La Stampa and the fourth represented the Catholic newspaper Avenire. 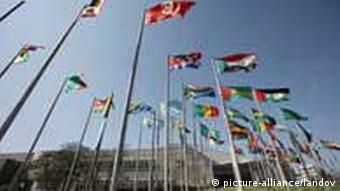 The African Union has yet to recognize the rebels

At the United Nations, US and UK politicians succeeded in securing the immediate release of an initial installment of $1.5 billion in frozen Libyan assets to support the NTC and provide humanitarian assistance. South Africa blocked the proposal, rejecting the prospect of funding the rebel government until the African Union (AU) has recognized them as the country's legitimate representatives. Agreement was only reached after a clause giving implicit recognition to the NTC was removed from the document.

The US said in response that if this issue remained deadlocked, it would seek a UN Security Council vote on the matter "as soon as possible," issuing a draft resolution to that end. Diplomats in New York have said a vote could come as early as Thursday or Friday.

Earlier in the week, the head of the NTC's cabinet, Mahmoud Jibril, had appealed for $2.5 billion by the end of the month to help begin the rebuilding process as the civil war appeared to be nearing its conclusion.

The rebels' key stronghold in the Nafusa mountain range looks ahead amid growing confusion over the situation in Libya's capital. Many refugees who had crossed into Tunisia are returning home. (25.08.2011)

EU foreign affairs chief Catherine Ashton may have missed her chance to turn Brussels into a serious diplomatic player in post-Gadhafi Libya as the member states take the lead, according to DW's Bernd Riegert. (25.08.2011)

Libyan rebels have declared victory to be close at hand as fighting rages at flash points across the capital, Tripoli. Journalists being held by Gadhafi loyalists in a hotel have been freed. (25.08.2011)

Mustafa Abdul Jalil, head of the rebels' administration and former justice minister, is set to be a key political player in post-Gadhafi Libya. So what is known about the man who could lead the country to a new future? (24.08.2011)

Photo Gallery: The battle for Libya

The search for Moammar Gadhafi continues