Dreaming of a future as Tripoli falls | World| Breaking news and perspectives from around the globe | DW | 26.08.2011

The rebels' key stronghold in the Nafusa mountain range looks ahead amid growing confusion over the situation in Libya's capital. Many refugees who had crossed into Tunisia are returning home. 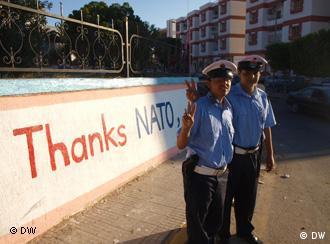 "Thanks NATO, you've saved our lives," reads a graffiti in downtown Nalut. The inhabitants of this Berber settlement in the Nafusa mountain range have experienced a dramatic turnaround in their lives in the last few weeks.

"It all changed when NATO bombed Ghezaia and Kut - Gadhafi's positions down the valley," Kemal Azad, a fighter at Nalut's checkpoint, told Deutsche Welle. "We've had electricity back for a week, oil supply has been resumed and a lot of refugees have returned for Ramadan," he added.

Today, the whole Nafusa mountain range has become a hub for fresh fighters bound for the country's capital. Heavy machine guns sit atop sand-camouflaged pick-ups and the rebels make sure everything is in working order.

"We need all the light weapons we can gather for the final battle in the streets of Tripoli. Whether Gadhafi is in Libya or not, dead or alive, there's still a strong resistance in the four strongholds still under their control," rebel commander Akram Fayaz told Deutsche Welle.

With the eastern front of Brega and the one in Misrata in a stalemate for over two months, the Nafusa-based rebels have played a key role in the speedy move toward Tripoli. The topography of the region - an imposing plateau over the Libyan desert - combined with the control over the Tunisian-Libyan border and, of course, NATO aircraft, seems to have been a successful formula. 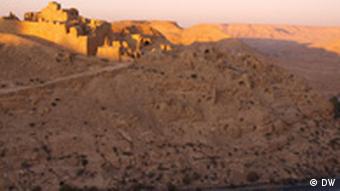 But despite the growing number of fighters in Libya's capital today, one third of the city is reportedly to be under the control of Gadhafi loyalists.

The Western part toward Zawiya is safe but the east of the town is overrun by soldiers and snipers," a rebel fighter who had just returned from Tripoli in a pick-up told Deutsche Welle. He would take the three-hour journey back, he said, as soon as his truck was filled with fresh ammunition.

The Nafusa mountain range had remained as an off-the-radar area for the international media until it became the closest front to Tripoli. With the northern border between Tunisia and Libya closed, the southern rebel-held border crossing remains the only way in and out in the West of the war-torn country.

Deutsche Welle came across barely a handful of other media companies just a few weeks ago. But today Nafusa is almost overrun by thousands of journalists who have been pouring in over the last five days.

"Journalists cross the border and head down for Tripoli straight away," explained local resident Juma Khan. "We are telling the people that the road north is far from being liberated yet and accidents, of course, do happen in the end."

Khan was referring to the kidnapping of four Italian journalists on Wednesday near Zawiya - a western region where Gadhafi's support still runs high.

"It seems that they were stopped on the road and their driver was shot. Now they're being kept hostage and it wouldn't come as a surprise that more journalists run into similar trouble in the forthcoming days," he added.

Other reporters though have been luckier. After being held in the Rixos hotel since the battle over Tripoli started, the group of foreign journalists based there was freed on Wednesday after the Libyan soldiers left.

But a mayor question still remains unsolved. "Where is Gadhafi?"

"I think he crossed the southern border bound for Chad last week," a man who had just arrived from Zintan - another village in the Nafusa mountains - told Deutsche Welle.

The rumours about Gadhafi's potential shelter range from Chad to Venezuela, and from South Africa to Algeria, and even Syria. Many local residents are sure that "America knows where Gadhafi is."

Still, the long chats during the Ramadan fasting focus not only on a man whose presence has been ubiquitous for the last four decades.

A meeting of representatives of the National Transition Council with French president Nicolas Sarkozy in Paris has boosted the talk over what Libya's more immediate future will look like. Until the dust settles in this war-torn country, local towns are likely to struggle to get back to normal.

One sign of change is the reopening of the mobile phone shop opposite the city's bazaar. Can such an enterprise possibly be successful in a city where a telephone line has not yet been restored? 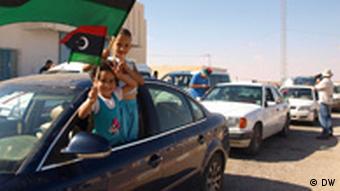 Most of the Libyan refugees based in Tunisia are returning home

"Easy, you can use your Tunisian cell phone if you stand by the main antenna at the radio station. This is thanks to an agreement with our neighboring country," says the adventurous entrepeneur. Yet another simple but eloquent example of how much the Libyans owe their Tunisian cousins at this turning point in history.

NATO operations have doubtless played a key role in the rebels' advance toward Tripoli but the help of Tunisia - a country which has hosted almost half a million Libyan refugees since the war started in February - shouldn't be forgotten.

Libya's new interim government has announced a transfer of power from the eastern city of Benghazi to Tripoli. As rebels battle to overcome pockets of resistance, fugitive leader Moammar Gadhafi remains elusive. (26.08.2011)

The Arab League has given its backing to the rebel National Transitional Council, saying it can represent Libya in the group at a meeting on Saturday. Regional powerhouse South Africa, however, is more reticent. (25.08.2011)

The battle for Libya in pictures