The meeting of the 20 leading industrial and emerging countries failed to move nations closer together in finding a solution for the Syria crisis. But there was progress on the issue of tax equity. 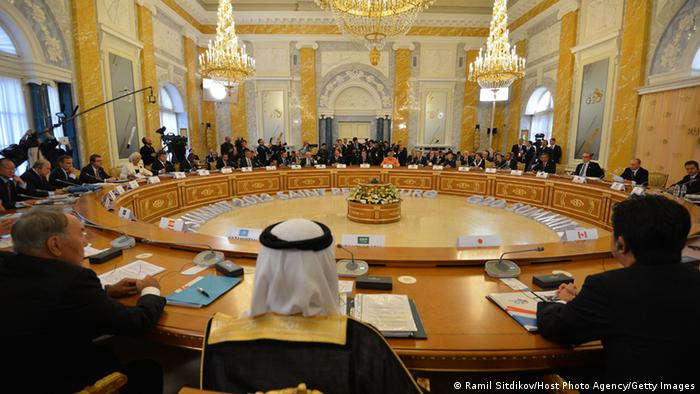 After anything but promising conditions ahead of the meeting, and low expectations regarding its outcome, the G20 summit in St. Petersburg failed to bring about a solution to what's currently the world's most pressing political conflict: the use of chemical weapons in Syria. The G20 did bring together all important players on the big international stage - but their positions ended up seeming further apart than ever. The main divide in the Group of 20 was over the question: political solution or military action in Syria?

German Chancellor Angela Merkel insisted on Friday (06.09.2013) in St. Petersburg that it was important the international community participated in exchange on the topic. There was broad consensus, she said, that a political process needed to somehow be triggered. "And I hope that countries like Russia and China will also contribute their share in trying to make a Geneva II conference happen," the Chancellor said, referring to the Mideast peace process. "But at the moment it's far from clear how we can reach a common UN resolution and a joint UN assessment." 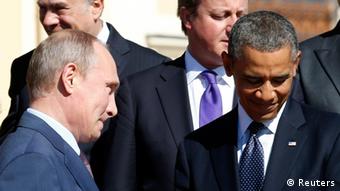 Putin and Obama did end up speaking, after all

In other words: The G20 failed when it came to Syria. One summit participant even said that some countries "simply couldn't be bothered to do anything" because they were much too busy dealing with their own problems.

Russia's President Vladimir Putin, the host of the summit, in his closing press conference asserted that the majority of participants were not in favor of military action against Syria. He repeated his well-known position, claiming the toxic gas attack could also have been an act of provocation by Assad's opponents. Putin said he had discussed the issue in a bilateral meeting with US President Barack Obama.

For his part, President Obama said he saw the majority of participants on his side. Failing to respond to this breach of international law, Obama said, would send a signal to nations, authoritarian regimes and terror organizations that "they can develop and use weapons of mass destruction and not pay the consequence. And that's not the world that we want to live in," Obama said to the media. Next Tuesday he will again address the American people.

EU foreign ministers will meanwhile continue to discuss the issue at their meeting in Lithuania's capital Vilnius, which will also be attended by US Secretary of State John Kerry. 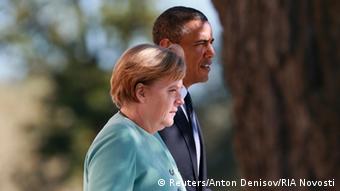 There was far more agreement when it came to economy-related issues on the G20 agenda, which comprise the core reason for the group's regular meetings - the G20 was established as an international forum following the start of the global financial crisis in 2008.

The global economic situation is recovering, according to the summit's closing declaration published on Friday (06.09.2013). But it added that it is still too early to say the crisis is over.

China's President Xi Jinping conveyed a similar message: He called on the G20 states to get their houses in order, and said better collaboration was needed to achieve that goal.

But such collaboration requires time - which becomes clear upon looking at financial sector reform. In recent years, there has been considerable progress; but work is still far from finished. In St. Petersburg, agreement was reached on a timetable to reduce multinational companies' means to legally evade taxes - one of the issues that Angela Merkel had pushed for.

"On the one hand, we are fighting against unemployment, on the other hand there are prospering companies that don't pay any taxes anymore, anywhere in the world," Merkel said. She added that she was glad progress had been made in regulating shadow banking systems. "We're sending the message: We're sticking to our word that we want every financial actor, every financial center and every financial product to be subject to rules. But the world has to work together for that."

Economic issues were supposed to be the focus of the agenda at the G20 summit in St. Petersburg. However, during breaks between meetings, it was the crisis in Syria that dominated conversations. (06.09.2013)

The EU's next step in regulating the financial market: monetary market and hedge funds, which are a high-risk, speculative business. Critics say the Union's measures don't go far enough. (05.09.2013)

The G20 summit in St Petersburg this week is overshadowed by tensions between Russia and the US over Syria. The summit is supposed to be addressing economic issues. (03.09.2013)

Non-governmental organizations (NGOs) welcomed the progress made toward a fairer global tax system, with other G20 nations stressing that developing countries have to benefit from it. And NGOs like Oxfam want to make sure poorer countries are participating in the negotiations.

In order to effectively lead the fight for more tax equity, G20 states agreed to exchange information. The goal is to develop standards by 2015 for setting up a joint database - a first step in effective information exchange.

In their last working session on Friday afternoon, heads of state and government discussed world trade and the fight against protectionism. It's become almost a ritual: Every year, countries sign a declaration stating that trade barriers are a detriment to the global economy. Yet the actual number of protectionist measures has risen in recent years.

Long-term infrastructure projects, seen as potential economic stimulus, were also on the agenda. Australia, which takes over the G20 presidency from Russia on January 1st, 2014, plans to put a special focus on the topic. The next G20 summit will be held in mid-November 2014 in Brisbane. This meeting will hopefully not be overshadowed by another global political crisis.