Conservative Nicolas Sarkozy won the French presidency against Socialist Segolene Royal on Sunday. Read DW-WORLD.DE's dossier in the run-up to one of the most exciting races in recent French history. 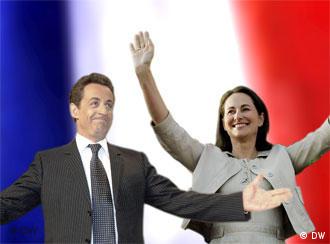 On May 6, French voters chose conservative Nicolas Sarkozy of the country's ruling UMP party to move into the Elysee palace instead of Segolene Royal, a socialist, who would have been the first female president of the republic.

After emerging as the top vote-getter in the first round on April 22, Sarkozy held a clear advantage and surveys showed that he was set to beat Royal in the second vote.

But analysts still thought Royal stood a chance to become president as she could unite the "Anyone but Sarkozy" voters behind her.

Check out the candidates and the issues in this special DW-WORLD.DE dossier.

Police clashed with rock-throwing protesters at the Bastille and security presence was high in the mainly immigrant suburbs after Sarkozy won the French presidency. (06.05.2007)

French voters cast ballots on Sunday to choose a new president, with right-winger and clear favorite Nicolas Sarkozy squaring off against Socialist Segolene Royal in a bid to win a mandate for sweeping change. (06.05.2007)

As Election Nears, French Duo Fight to a Draw in Last Debate

A crucial French presidential debate between frequently bad-tempered candidates Nicolas Sarkozy and Segolene Royal failed to give either candidate a significant boost in the polls. (03.05.2007)

Opinion: It's Time to Get Serious in France

Deutsche Welle's Anke Hagedorn says that Nicolas Sarkozy and Segolene Royal now need to focus on the issues rather than appearances before they square off again in the race for the French presidency on May 6. (23.04.2007)

Socialist candidate Segolene Royal's refreshing break with tradition initially appealed to voters, but detractors on both the left and right have criticized her style and lack of substance. (20.04.2007)

The Rise of Centrist Francois Bayrou

With the French presidential election campaign entering its final week, DW-WORLD.DE takes a look at Francois Bayrou, so the so-called "Third Man" of the presidential race. (15.04.2007)

For over 30 years, Jean-Marie Le Pen has campaigned at the top of French politics. While labeled an anti-Semite and rascist by some, he still commands enough support to add a dark dimension to the presidential election. (05.03.2007)

The plight of the homeless has become a hot button issue in looming French elections as growing protests over homelessness led by a French charity gather momentum. (06.01.2007)

"This Election Is Like a Soccer Cup Tie Match"

In an interview with DW-TV, Franco-German Daniel Cohn-Bendit, a leading politician for the Greens in Europe, talked about the French presidential election and the consequences for France and Europe. (22.04.2007)