Police, Protesters Battle After Sarkozy Win | Europe | News and current affairs from around the continent | DW | 07.05.2007

Demonstrators in city suburbs across France threw rocks and bottles as conservative Nicolas Sarkozy won the country's presidential election. Police moved in with tear gas and made scores of arrests. 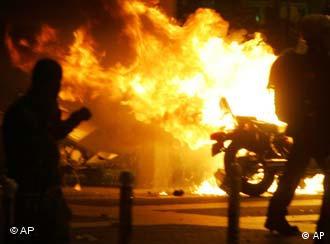 Vehicles were set on fire in Paris and elsewhere

Sarkozy's victory was met with hostility in France's poor, mainly immigrant suburban housing projects. One of the largest clashes on early Monday morning took place at Paris' Place de Bastille, where some 300 protestors from a crowd of more than 5,000 attacked police with rocks and bottles.

Some of the demonstrators were waving anarchist flags. Earlier they burned an effigy of the conservative presidential candidate and chanted "Sarko-fascist." Police used water cannons and tear gas to disperse the crowd. 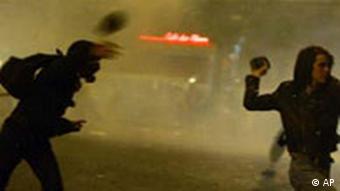 In Argenteuil, to the northwest of the French capital, police said rioters had set fire to four vehicles, including a parked bus. Argenteuil was one of the centers of the youth rioting that shook France in 2005. That violence came after Sarkozy, then France's interior minister, referred to young people living in the projects as "rabble" and "scum."

Before Sunday's vote, socialist candidate Segolene Royal had warned that there could be violence if Sarkozy were elected. 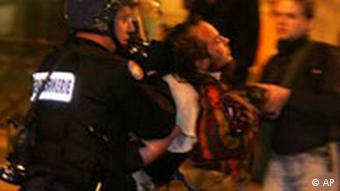 The troubles were by no means confined to Paris and its environs. In the western city of Nantes, police clashed with a crowd of more than 1,000. Police said that two officers had been slightly injured when acid was thrown at them, and that 22 people had been detained.

In Bordeaux several police officers were injured, one seriously, after protestors at a gathering of some 2,000 Sarkozy opponents began throwing pavement stones. Eighteen people were arrested there.

There were similar clashes in Marseille, Lille, Lyon, Nancy and Metz, with people angry at the outcome of the election smashing shop windows and setting fire to vehicles. 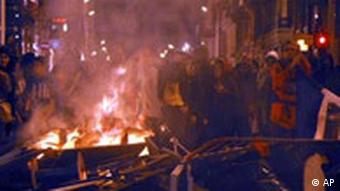 The southwestern city of Toulouse was another site of unrest

But French police said the scale of the violence was limited. "There are some tensions," a police spokesman said, "but they are isolated incidents." Thousands of extra police had been deployed to patrol the streets on Sunday, as the French populace went to the polls.

The election was one of the hardest-fought in French history, with Sarkozy eventually taking 53 percent of the vote to 47 percent for Royal.