Conservative Sarkozy Is France′s Next President | Europe | News and current affairs from around the continent | DW | 06.05.2007

Right-wing candidate Nicolas Sarkozy handily won the French presidential election with 53 percent of the vote; some 85 percent of those eligible came to the polls. 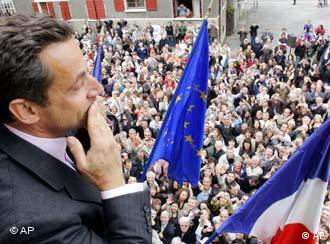 Sarkozy: "Now is the time for me to give back to France what France has given to me."

Shouts of joy and cries of "Nicolas -- President!" erupted from Sarkozy's supporters as it became clear he had defeated his Socialist opponent, Segolene Royal.

The significant lead at the polls appears to be a clear mandate for his plan for tough economic and social reforms. UMP party candidate Sarkozy will replace conservative Jacques Chirac, who is stepping down after 12 years in office.

The hard-fought race for Chirac's successor was the first in which a woman tried to win the French presidency. That, and the clear left-right divison of the candidates' ideologies, brought voters flocking to the polls. 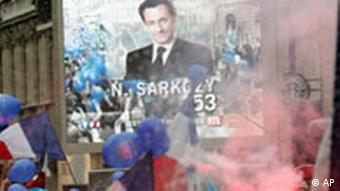 Sarkozy's clear win has been called a mandate for change

Turnout was estimated at around 85 percent of France's 44.5 million eligible voters -- the highest percentage since the 1965 election won by Charles de Gaulle.

"Now is the time for me to give back to France what France has given to me," Sarkozy told delighted supporters. "Together we are going to write a new page of history. The page, I am sure, will be great and it will be beautiful."

And he told cheering crowds that he promised to be "president for all the French without exception."

"To all those French who did not vote for me, I want to say,
beyond political battles, beyond differences of opinion, for me
there is only one France. ... I will be president of all the French," Sarkozy said.

He made his first forays as president into international relations when he said, "I want to launch a call to our European partners, with whom our destiny is deeply linked, to tell them that I have been European all my life, that I believe deeply, that I believe
sincerely, in European construction, and that tonight France is
back in Europe."

And to the US he had a message on global warming, saying, "France will always be by (the US's) side when they need her. But ... a great nation like the United States has the duty to not obstruct the fight against global warming, but on the contrary to head this struggle. Because what is at stake is the future of all humanity." 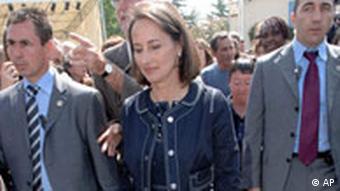 Royal cast a ballot in her home district

Meanwhile, Royal, who took around 47 percent of the vote, conceded defeat. Speaking to her supporters at her election headquarters, she said she hoped that "the next president of the republic will accomplish his mandate for the service of all French people."

And, she added: "I will continue with you and near you...You can count on me to deepen the renovation of the left."

Jean-Louis Borloo, who is tipped as a possible prime minister under a Sarkozy presidency, hailed the right-winger's election victory as being "beautiful because it was unambiguous."

Thousands of police were on standby in Paris and its high-immigrant suburbs in case a Sarkozy victory sparks trouble. But preparations went ahead for celebrations into the night.

Technicians erected a stage in the central Place de la Concorde, at the spot where the Sarkozy camp planned its main events.

The strong participation underscored the exceptional interest generated by the left-right battle for the Elysee palace.

Sarkozy arrived at his Paris campaign headquarters in the late afternoon, smiling broadly and shaking hands with members of the crowd that gathered outside.

The former interior minister earlier cast his ballot in the chic Paris suburb of Neuilly sur Seine, where he was greeted with cheers of "Nicolas president." His wife Cecilia was not present however.

Royal said the choice for her "had not been difficult" after voting in the town of Melle in her constituency in western France. 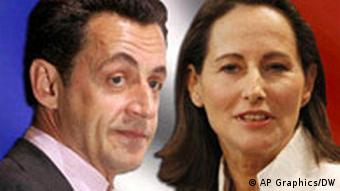 Sego vs. Sarko: the race that mobilized a nation

Sarkozy, 52, who has been leading in public opinion polls, says he wants to get France "back to work" and is proposing tax cuts and incentives to free up the labor market. He also supports tougher controls on immigration.

Royal, 53, had proposed to safeguard France's generous social net, create jobs and carry out institutional reform to bring government closer to the people.

"Today we are making a choice as a society," said Guillaume Bellequic, 28, a computer expert who emphasized the differences between the two candidates after he voted in the western city of Nantes.

"There is change in the air," said Gaelle Bernard, 30, a psychologist. "And I am mostly hopeful." 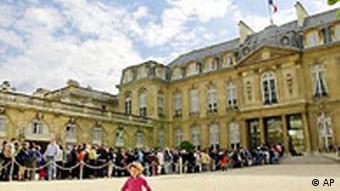 But the election marks a shift to a new generation of leaders who are promising to tackle the huge national debt, high unemployment and simmering tensions in the suburbs.

The first round on April 22 was marked by a near-record turnout of 84 percent. Sarkozy and Royal advanced from a list of 12 candidates.

The new president is expected to take office around May 16, and launch into the campaign for legislative elections to be held in June to fill all 577 seats in the National Assembly.

French voters cast ballots on Sunday to choose a new president, with right-winger and clear favorite Nicolas Sarkozy squaring off against Socialist Segolene Royal in a bid to win a mandate for sweeping change. (06.05.2007)

Outgoing French President Jacques Chirac was praised by German Chancellor Angela Merkel for strengthening Franco-German relations as he paid a farewell visit to Berlin on Thursday. (03.05.2007)