French voters cast ballots on Sunday to choose a new president, with right-winger and clear favorite Nicolas Sarkozy squaring off against Socialist Segolene Royal in a bid to win a mandate for sweeping change. 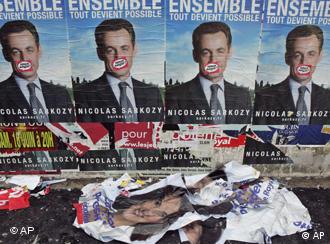 Some 44.5 million voters are eligible to take part in the election pitting Sarkozy, the son of a Hungarian immigrant who has promised a "clean break" with the past, against Royal, who wants to become France's first woman president.

The election is to choose a successor to Jacques Chirac who is stepping down after 12 years in office and caps a campaign that placed voters before a stark left-right choice to fix France's problems.

Sarkozy, who has been leading in public opinion polls, says he wants to get France "back to work" and is proposing a raft of tax cuts and incentives to free up the labor market. He also supports tougher controls on immigration.

Royal, a 53-year-old former adviser to President Francois Mitterrand, is proposing to safeguard generous social protection, create jobs and carry out institutional reform to bring government closer to the people.

With the final polls showing Sarkozy on course for victory, Royal on Friday warned that his victory could re-ignite violence in the high-immigrant suburbs following riots in late 2005.

Royal has described Sarkozy as a "dangerous" leader who would divide rather than unite the French people and urged voters to show that the polls "were lying."

Sarkozy responded by labeling Royal's attacks as "outrageous" and prompted by desperation.

Sarkozy, the 52-year-old former interior minister, is hated by many Arab and African immigrants in the suburbs that were rocked by three weeks of rioting in late 2005 in which hundreds of buildings and thousands of cars were burned.

His tough approach to law and order and pledges to purge the suburbs of "scum" has turned him into an enemy of the poor neighborhoods where many descendants of north African immigrants say they are shut out of mainstream France.

Security beefed up in Paris suburbs 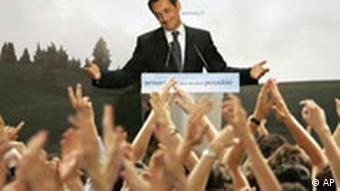 Security has been stepped up in Paris and the suburbs to prevent possible violence in the event of a Sarkozy victory, with some 3,000 riot police on alert for trouble.

In Argenteuil, one of the suburbs at the center of the 2005 riots, a steady stream of voters calmly turned out to render their verdict at the end of one of the hardest fought campaigns in decades.

Aurelie, a 21-year-old student from the French island of La Reunion, said she voted for Royal to try to block a Sarkozy victory.

"People say that if he wins there will be more violence so naturally it makes you think," she said.

Early polling was also brisk at a station on Ile Saint-Louis, in the heart of Paris.

Francois, who declined to give his last name, said he was voting for Sarkozy because he felt that "instinctively" he was better suited for the post. 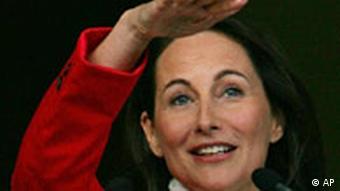 Socialist candidate Royal is hoping for this much more support

Royal battled throughout the campaign to dispel doubts about her presidential stature, while Sarkozy faced voter concerns that his hyper-active personality was a liability.

The election marks a shift to a younger generation of leaders born after World War II, who are promising to tackle the huge national debt, high unemployment and simmering tensions in the suburbs.

Fight for the center

A first round of voting was held on April 22 marked by a near-record turnout of 84 percent. Ten of the 12 candidates in that election were eliminated, allowing Sarkozy and Royal to advance.

The run-off focused on winning over the 6.8 million voters who backed centrist Francois Bayrou after he campaigned on a platform that rejected the left-right divide.

The new president is expected to take office around May 17, and set his or her sights on the legislative elections to be held in two rounds in June to fill all 577 seats in the National Assembly.

Outgoing French President Jacques Chirac was praised by German Chancellor Angela Merkel for strengthening Franco-German relations as he paid a farewell visit to Berlin on Thursday. (03.05.2007)

As Election Nears, French Duo Fight to a Draw in Last Debate

A crucial French presidential debate between frequently bad-tempered candidates Nicolas Sarkozy and Segolene Royal failed to give either candidate a significant boost in the polls. (03.05.2007)