Authorities are investigating a deadly knife attack in the French city of Nice as a terrorist incident. Following the third attack in two months attributed to Islamist extremists, France raised its alert level to urgent.

A knife attack at a church in the French city of Nice left three people dead and several others injured on Thursday.

Condolences and condemnation of the attack flooded in from around the world.

The attack took place Thursday morning at the Notre Dame Basilica in the heart of the Mediterranean city.

Terrorism investigators said the suspect entered the church and waited a half hour before cutting the throat of the custodian, then nearly decapitating a woman and stabbing a third woman, who escaped the church and died at a nearby cafe. 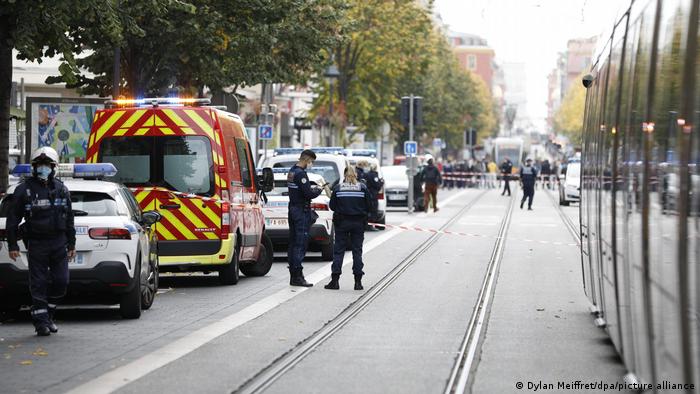 French officials said an investigation was underway into a terrorist attack

What did French leaders say?

President Macron announced he will more than double the number of French soldiers deployed for domestic anti-terrorism duties.

"We will thus enable ourselves to protect all places of worship, especially churches, so that the feast of All Saints' Day on November 1 can take place in the proper conditions," Macron said after arriving at the scene of the attack.

Macron also promised "the support of the whole nation to the Catholics of France and elsewhere."

"Very clearly it is France that is being attacked over our values, our taste for freedom and for the ability on our soil to have freedom of belief," he said, adding that France "will not give any ground."

Nice Mayor Christian Estrosi said it now "time for France to exonerate itself from the laws of peace in order to definitively wipe out Islamo-fascism from our territory." 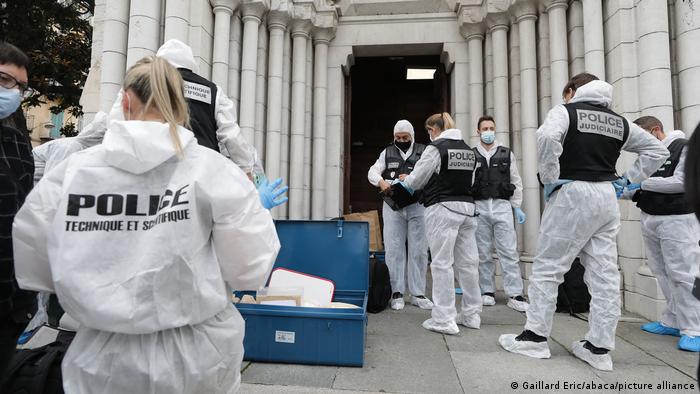 Tunisian court spokesman Mohsen Dali said the suspect is 21-year-old Brahim Aouissaoui, who left Tunisia by boat in September. Dali added that Aouissaoui was not known as a suspected militant before leaving Tunisia.

France's anti-terrorism prosecutor, Jean-Francois Ricard, told a press conference late Thursday that Aouissaoui first entered the EU illegally on September 20 via the small Italian island of Lampedusa. Aouissaoui was then brought to the Italian port city of Bari, where he disembarked on October 9, according to Ricard.

The Italian Interior Ministry said it had issued a notice of expulsion for Aouissaoui, but authorities had lost track of him. It is unclear when the suspect reached France.

He changed his clothes at Nice's train station and walked a short distance to the cathedral where the attack took place. Ricard added that the suspect was not known to French intelligence services.

The suspect was seriously wounded by police during the attack and is being treated in a hospital. Police in Nice said he was carrying an Italian Red Cross ID card.

A copy of the Koran, two telephones, a knife with a 17-centimeter (6.6 inch) blade used in the attack and two other unused knives were found at the scene of the attack, Ricard said.

Tunisian official Dali said Aouissaoui had been living in Tunisian port city of Sfax, a major starting point for boats carrying people illegally into Europe via Lampedusa, about 130 kilometers 80 miles from the North African coast.

Tunisia condemned the attack and the country's special counter-militancy court said it was beginning an investigation into "the suspicion that a Tunisian committed a terrorist operation abroad."

Under Tunisian law, any citizen accused of involvement in a terrorist act inside or outside of Tunisia may be prosecuted.

Incidents in Avignon and Saudi Arabia

Also on Thursday, near the French city of Avignon, police said they shot a man dead after he threatened passers-by with a weapon, and shouted "Allahu Akbar."

France's Le Figaro newspaper cited a police source saying the man had psychiatric issues and the incident did not appear to be related to terrorism.

Meanwhile, a man in the Saudi Arabian city of Jeddah reportedly stabbed and wounded a guard at the French Consulate.

How have global leaders reacted?

In Paris, lawmakers in the National Assembly observed a minute's silence in solidarity with the victims. The mayor of Paris, Anne Hidalgo, said the people of Nice "can count on the support of the city of Paris and of Parisians."

German Chancellor Angela Merkel said she was deeply shaken by the brutal murders. "My thoughts are with the relatives of those murdered and injured. Germany stands with France at this difficult time," she said.

Pope Francis decried the "savage attack," offering support for the victims' families and saying he "shares their grief." 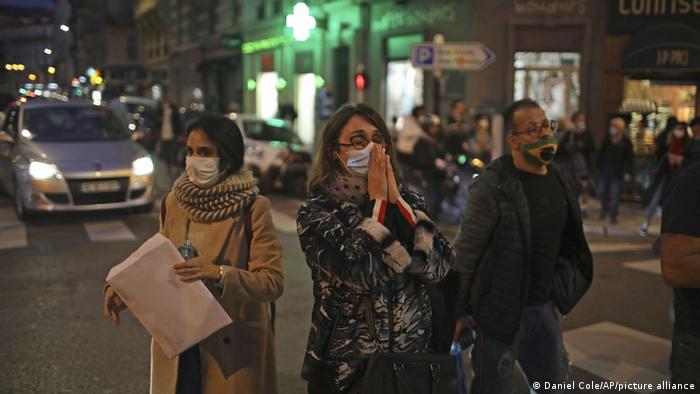 Thursday's attack was the third in two months in France that authorities have attributed to Islamist extremists. Those include the beheading of a middle school teacher, Samuel Paty, earlier this month in Paris by a man of Chechen origin.

The attacker had said he wanted to punish Paty for showing pupils cartoons of the Prophet Muhammad in a civics lesson.

It was not immediately clear if Thursday's attack was connected to the cartoons, which some Muslims consider to be blasphemous.

Crowds of people came to the cathedral in Nice to pay their respects after the attack. DW correspondent Lisa Louis said many were in shock, and were reminded of a terrorist attack in July 2016 when more than 80 people were killed by a Tunisian immigrant who drove a truck into Nice's crowded promenade on Bastille Day.

In Berlin, hundreds of people, including many senior politicians, held a minute's silence at the French embassy. They paid their respects by placing candles and lilies.

"Tragically, next to those flowers were the candles and notes of remembrance left just a couple of weeks ago after the murder of the teacher, Samuel Paty," DW's Kate Brady described from the scene.

France has been the subject of protests and boycotts after President Macron pledged to fight "Islamist separatism" and defended the controversial cartoons of Muhammad, saying he won't renounce them.

Many Muslim-majority countries condemned Macron's remarks and called for a boycott of French goods.

Turkey has led the charge, with President Recep Tayyip Erdogan accusing him of running an anti-Islamic agenda.