Leaders from around the world are expressing solidarity with France following a deadly knife attack at a cathedral in Nice. German Chancellor Angela Merkel said she was "deeply shaken." 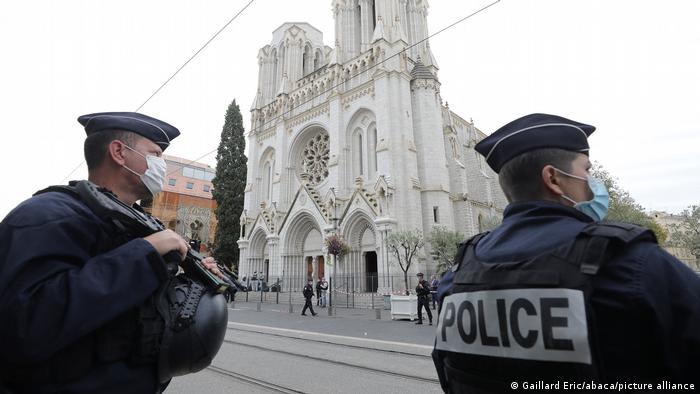 Leaders from around the world condemned a deadly knife attack on Thursday in Nice that left three people dead. French investigators are treating the attack as an act of terrorism.

The attack took place on the observance of the Prophet Muhammad's birthday. It is the third in France attributed to Islamists in two months following outrage among some Muslims over a cartoon of Muhammad reprinted by the French satirical magazine Charlie Hebdo in September.

French President Emmanuel Macron has responded by cracking down on Islamist groups in France. However, leaders of Muslim-majority countries, like Turkey and Pakistan, have accused Macron of "Islamophobia."

German Chancellor Angela Merkel said she was "deeply shaken" by the "terrible murders" at the church in Nice, and that her thoughts were with the relatives of those killed.

"The French nation has Germany's solidarity in these difficult hours," Merkel said via her spokesman on Twitter.

US President Donald Trump said on Twitter that "our hearts are with the people of France."

"America stands with our oldest ally in this fight. These radical Islamic terrorist attacks must stop immediately."

European Commission President Ursula von der Leyen said "all of Europe" is in solidarity with France following the "odious and brutal attack."

"My thoughts are with the victims of this hateful act. We will remain united and determined in the face of barbarity and fanaticism," she tweeted.

The EU later issued a joint statement calling the murders an attack on the bloc's "shared values."

"We call on leaders around the world to work towards dialogue and understanding among communities and religions rather than division," the statement said.

Italian Prime Minister Giuseppe Conte said the "vile attack" would not "shake the common front defending the values of freedom and peace.

"Our convictions are stronger than fanaticism, hatred and terror," he said.

Spanish Prime Minister Pedro Sanchez said that Europe was "united against hatred" and would "continue to defend freedom, our democratic values, peace and the security of our citizens."

British Prime Minister Boris Johnson said on Twitter that he was "appalled" to hear the news of the "barbaric attack at the Notre-Dame Basilica."

"Our thoughts are with the victims and their families, and the UK stands steadfastly with France against terror and intolerance."

Despite the diplomatic spat between the two countries, Turkey was one of the first countries to offer condolences to the victims.

"We stand in solidarity with the people of France against terror and violence,'' a Turkish foreign ministry statement said.

Turkey's presidential spokesman, Ibrahim Kalin, tweeted in Turkish and French that "We will fight all kinds of terror and extremism with determination and in solidarity."

Saudi Arabia, the birthplace of Islam, issued a statement condemning "extremist acts" that "contravene all religions," adding it is important to avoid " all practices that generate hatred violence and extremism."

Iran's Foreign Minister Mohammad Javad Zarif tweeted in English that the "vicious cycle" of hate speech, provocation and violence must be "replaced by reason and sanity."

"We should recognize that radicalism breads more radicalism, and peace cannot be achieved with ugly provocation."

Tunisia, where the suspect is said to have originated, issued a statement "strongly condemning the terrorist incident in Nice" and expressing "solidarity with the people and government of France."

The North African country also rejects "all forms of terrorism and extremism," while cautioning against "ideological and political exploitation of religions," according to the statement released by the Foreign Ministry.

Pope Francis, the leader of the Catholic Church, said he was praying for the families of those killed at Nice's Notre Dame cathedral, and that "terrorism and violence can never be accepted."

"Today's attack has sown death in a place of love and consolation. The Pope is aware of the situation and is close to the mourning Catholic community," Vatican spokesman Matteo Bruni said.

The pontiff said he urged people in France to "unite to combat evil with good."