Anti-French sentiment grows in Muslim countries | World | Breaking news and perspectives from around the globe | DW | 27.10.2020 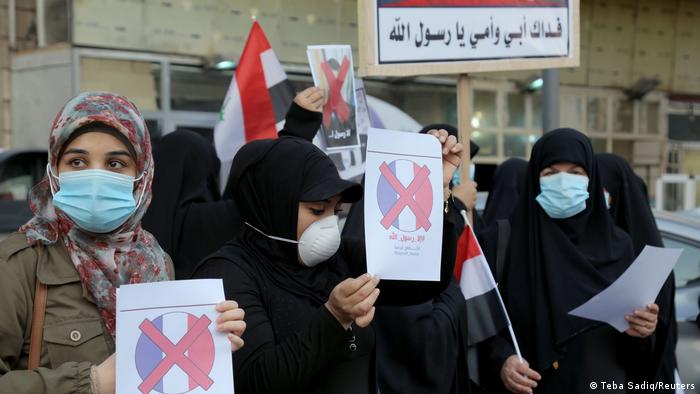 In the wake of the murder of Samuel Paty, a teacher who was killed for showing students caricatures of Prophet Muhammad, French authorities have launched a crackdown on radical Islam, closing one mosque and raided several properties. Earlier in September, President Emmanuel Macron had pledged to fight "Islamist separatism" and to protect French values and principles.

The reactions in many parts of the Muslim world are growing increasingly vociferous.

Turkish economist Ugur Gurses told DW that it's not a surprise that President Tayyip Recep Erdogan is escalating tensions with the West. One reason, Gurses said, is that Erdogan has failed to address Turkey's economic problems that have been exacerbated by the coronavirus pandemic.

"Polls show significantly declining support for the ruling party and its allies. Erdogan knows that if Europe or the US impose sanctions on Turkey then his votes will increase. That's the reason why he's in a fight with Macron and Trump," he said.

According to Ilhan Uzgel, a professor for international relations at Ankara University, Erdogan's main concern is to maintain support among voters. "Erdogan is unable to produce policies which could save the Turkish economy. And no one is surprised that he's called on Turkish people to boycott French products. He doesn't care at all whether he has a 'belligerent' image or not, the only thing that matters for him right now is to secure support among voters." 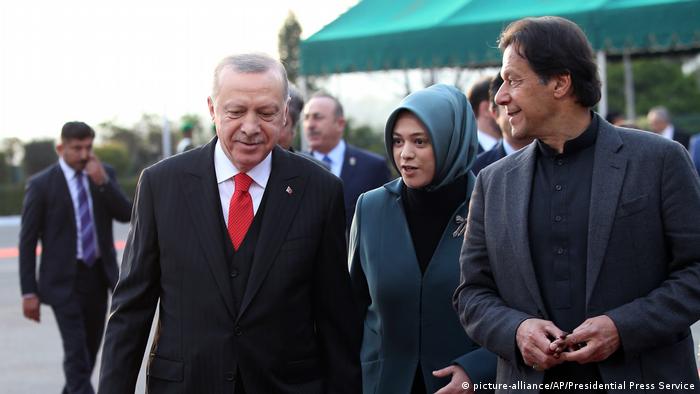 Prime Minister Imran Khan has expressed his dissatisfaction with Macron's comments, saying that "Macron's well-thought-of verbal attack on Islam has hurt the feelings of hundreds of millions of Muslims all over the world.''

Importantly, Khan's tweets are both in English and in Urdu, Pakistan's national language, which means he is also trying to reach out to the masses on this issue. Many Pakistanis are also unhappy about what Macron said — without fully understanding the depth and context of the issue.

Historically close political and economic relations between Pakistan and Turkey mean that Turkey has always been seen as the closest, most reliable ally of Pakistan in the international community. Erdogan is viewed in Pakistan as a leader of the Muslim world — and, for many, even more important than the Saudi king, the custodian of Islam's two holiest places in Mecca and Medina.

Turkey has also been working on multiple multibillion-dollar development and infrastructure projects in Pakistan for decades.

Macron's comments have also caused a backlash in several Arab states, among those political players who are close to Erdogan and the Muslim Brotherhood political movement.

In Jordan, a spokesman for the local branch of the Muslim Brotherhood condemned Macron's comments as an "attack of the Islamic nation," while the Foreign Ministry said the publication of the Muhammad cartoons had hurt the feelings of many Muslims.

In Libya, Mohammed Zayed, a member of the presidential council, was equally scathing and described Macron's comments as "vicious claims." The backdrop here is that the presidential council is led by Prime Minister Fayez Sarraj, whose government relies on support from Islamist parties. Moreover, the attacks on Macron are seen as a gesture of solidarity with Erdogan, whose government has supplied military and political support to Sarraj's UN-recognized government in Tripoli in the conflict with Khalifa Haftar, who controls much of the east and south of Libya. 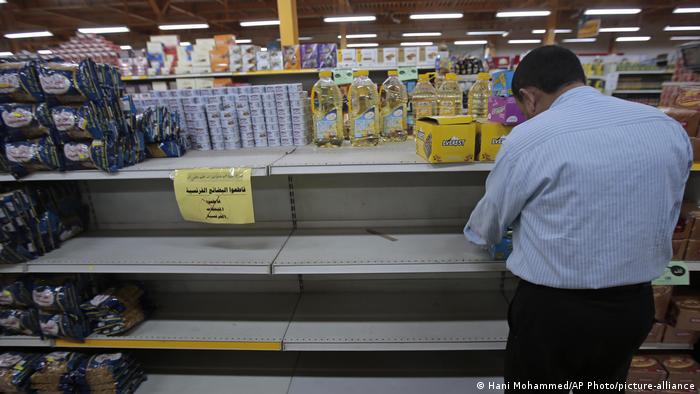 Supermarket shelves like this one in Yemen's capital, Sanaa, are being cleared of French products

Qatar is another close ally of Turkey. The Gulf state is seen as a key sponsor of the Muslim Brotherhood and its regional offshoots. Here, as in Kuwait and Jordan, French products have been removed from a number of supermarkets.

So far, Saudi Arabia has been conspicuous by its reluctance to join the chorus of criticism. On Tuesday, the Saudi cabinet released a statement that renewed "its condemnation and rejection of every terrorist act or practices and actions that generate hatred, violence, and extremism," while condemning the cartoon depictions of the Prophet Muhammad. But the statement did not refer to the boycott of French products.

The wave of pro-Turkey protests throughout the region has put the regime in Saudi Arabia and in Egypt on the spot as they try to juggle their opposition to Erdogan and the Muslim Brotherhood with the growing popular discontent on the streets and on social media platforms in the region.

Saudi Arabia has been running a boycott campaign against Turkish products for weeks to counter Ankara's influence and attempts to usurp Saudi leverage and leadership in the Islamic world.

Meanwhile, Macron remains adamant in his defense of the French principles of free speech and secularism, a strict separation of religion and government institutions.

The measures he announced, such as a crackdown on hate speech and the closure of organizations harboring radical Islamists, are supported by a majority of French citizens, according to a recent poll. And they particularly appeal to right-wing and far-right voters.

With an eye on the presidential election in April 2022, Macron is clearly looking to shore up conservative support. But it's far from clear whether his strategy to woo those voters will pay off. As Jean-Marie Le Pen, the founder of far-right party Front National (now called the National Rally), once put it: "The French will always prefer the original to a copy."