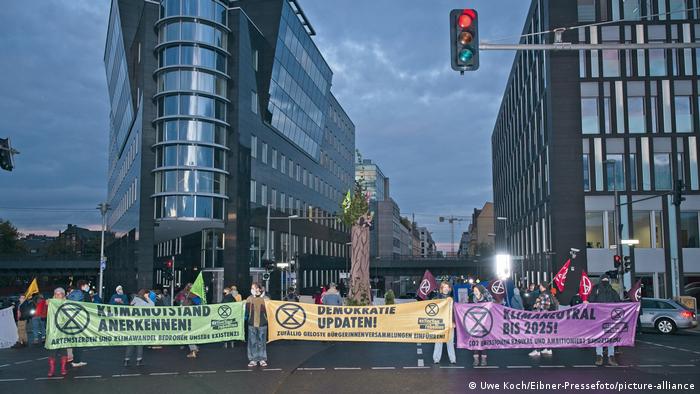 The aim of the blockade was to call for a so-called "ecocide law," which would designate climate and environmental damage as a criminal offense, German news agency DPA reported.

The German Twitter account of Extinction Rebellion posted: "Tonight we blocked the government district in 7 places. Politics must be detained. We demand Ökzid Law for the ecological and climate crisis!"

The police said no crimes were committed during the action.

The protesters wanted to ensure that the members of the Bundestag had to "do detention" in the Reichstag by preventing them from leaving the government building, according to an Extinction Rebellion spokeswoman.

Around 350 activists took part in the demonstrations. There was also a rally occurring at the Brandenburg Gate in the center of the German capital. 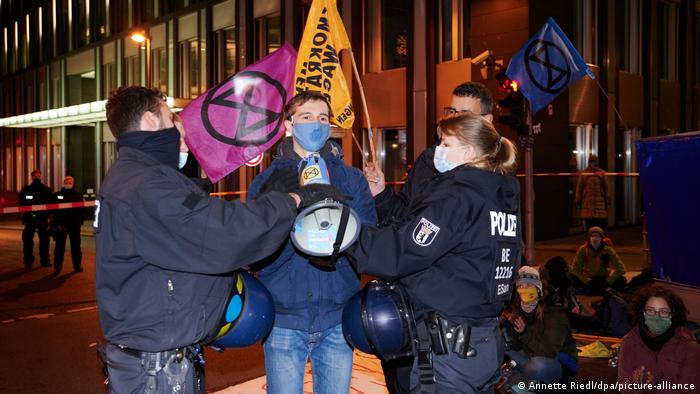 Berlin police beside an Extinction Rebellion protester in Berlin. Some 350 people took part in the actions, according to a spokeswoman for the group

Extinction Rebellion had announced a week-long series of protests in Berlin aimed at highlighting environmental degradation and climate change.

Due to the coronavirus pandemic, there were significantly fewer participants this year compared to last. Several thousand people took part in the 2019 week of action in Berlin with flash mobs and bicycle demos, as well as road blockades.