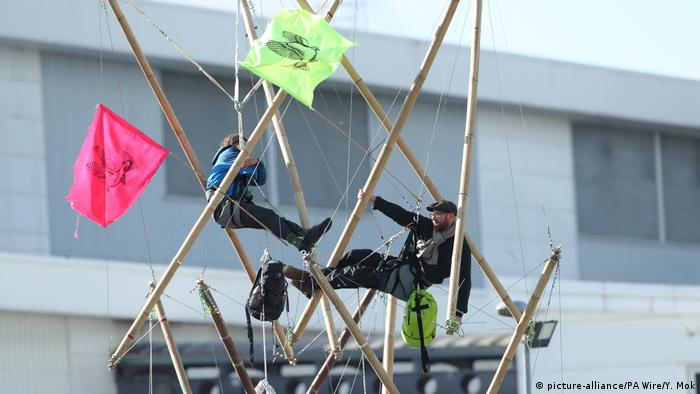 Blockades by climate activists that delayed several British newspapers from going on sale on Saturday have been branded as "unacceptable" by UK Prime Minister Boris Johnson.

More than 100 protesters from Extinction Rebellion, also known as XR, had chained themselves to vehicles and blocked roads to three sites across the UK that belong to media magnate Rupert Murdoch.

"A free press is vital in holding the government and other powerful institutions to account on issues critical for the future of our country, including the fight against climate change," Johnson wrote on his Twitter account.

"It is completely unacceptable to seek to limit the public’s access to news in this way," he said.

Extinction Rebellion said the protest was to highlight what it sees as the British media's failure to report on the "climate emergency" fairly and accurately.

The group on Saturday tweeted that the UK's current Conservative government was "out of touch with the people."

The demonstration led leading to major delays in deliveries of several national newspapers. The plants print The Sun and The Times, which belong to the Australian-born businessman's News UK group, as well as the Daily Mail, the Daily Telegraph, and the Financial Times.

A Newsprinters spokeswoman said the disruption meant printing had to be transferred to other sites.

"This attack on all of the free press impacted many workers going about their jobs. Overnight print workers, delivery drivers, wholesale workers and retail newsagents have faced delays and financial penalty," the spokeswoman was quoted by the Reuters news agency as saying.

Arrests made by police

Police on Saturday said they had arrested dozens of people so far at different sites.

Extinction Rebellion said the protest aimed to "expose the failure of these corporations to accurately report on the climate and ecological emergency."

The group on Saturday tweeted that the UK's current Conservative government was "out of touch with the people."

XR began ten days of renewed demonstrations across the country on Tuesday to demand that the government do more to tackle climate change.

On Wednesday, its activists descended upon Westminster where demonstrators lay under white sheets to represent corpses.

Last year, more than 1,700 people were arrested during its 10-day "Autumn Uprising" that led to major disruption across the UK.

Climate protesters have decried excavation plans at Garzweiler 2, a giant lignite coal mine in western Germany. Scuffles broke out as a breakaway group of activists briefly occupied a giant excavator.

Inside Europe: The home of Extinction Rebellion