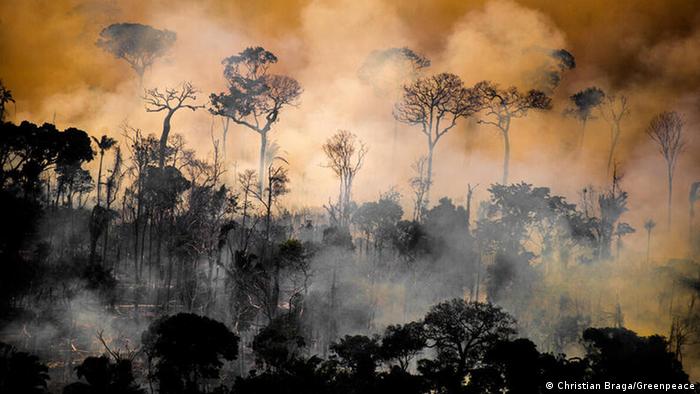 European Commission President Ursula von der Leyen has proposed a global species protection accord along the lines of the Paris climate agreement while addressing the World Economic Forum (WEF).

Speaking via video on Tuesday, von der Leyen said the measure could be debated at this year's UN biodiversity summit in China. The Commission president said species protection was key to protecting people against pandemics as well as in the fight against climate change. She added that it would also help a number of business sectors.

"If we don't urgently act to protect our nature, the next pandemic will be around the corner," she said. Her comments referenced the Ebola crisis precipitated by the clear-cutting of forests in Africa. Such deforestation, she said, has robbed bats carrying the deadly virus of their natural habitat, driving them to move into closer proximity to humans.

Can green investment change the world?

'A legal framework for the restoration of healthy ecosystems'

"When we lose forests … we also lose a key ally in our fight against climate change," said von der Leyen, noting that "Europe will soon present a legal framework for the restoration of healthy ecosystems."

To drive home her point, she pointed out the economic benefits of such moves. "To those who prefer the business case, here it is: More than half of global GDP is dependent on high-functioning biodiversity and ecosystems — and it is from food to tourism, you just name it," she said.

In her video presentation, von der Leyen underscored the fact that the most recent WEF Global Risk Report found that "the world's top five risks are all related to the environment." She pledged that Europe would "protect at least 30% of land and sea" and that the EU was prepared to present similar initiatives at a global level.

She said her proposal was one of the priorities of the European Green Deal presented at the WEF last year, saying: "One year on, this has not lost any of its urgency."

Beyond government solutions, von der Leyen also urged businesses to heed the growing environmental consciousness within society by doing their fair share. "Companies who get ahead of the game now will have a big advantage," she said, She followed this up by announcing EU legislative proposals for sustainable business that will "not drive deforestation on the other side of the world."

Challenge of replanting a sustainable forest