Scientists at Germany's Robert Koch Institute have said the likely cause of the current Ebola epidemic is from bats that live in hollow trees in Guinea. The virus may have been passed on to a child who was playing there. 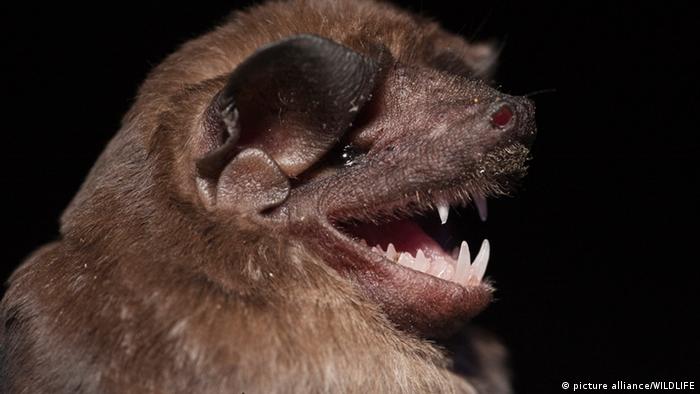 The findings by the Berlin-based institute were published on Tuesday in the journal EMBO Molecular Medicine.

Led by scientist Fabian Leendertz researchers delved into the circumstances surrounding the first fatality and were led to a colony of insect-eating bats which lived in a hollow tree 50 meters from the deceased two-year-old victim's home in the village of Mliandou in Guinea.

"The close proximity of a large colony of free-tailed bats ... provided opportunity for infection. Children regularly caught and played with bats in this tree," the team said following a four-week probe carried out in April.

No changes in animal population

According to the RKI, previous outbreaks of Ebola also resulted in a significant number of deaths among wild animals, for example apes and antelopes. Therefore the research teamed investigated whether the population of wild animals in the area had declined in recent months, but found no changes.

Local surveys also showed that children not only often caught the bats and played with them, but that they were also known to grill them.

Whether the virus was ultimately transferred by eating animals or through contact with their bodily fluids, remains open for question. Leendertz told the German Press Agency that the infection was an "unfortunate accident."

Eating an infected animal or coming into contact with its bodily fluids would usually be highly improbable.

"The people need to be made aware about the potential dangers of bats," the researchers wrote, adding that they should, at the same time, be informed about "their great benefits to the ecosystem."

According to industry experts, eradicating bats is not an option.

"Such large-scale cull would be completely pointless," said Andreas Streit, who heads the Bonn UN Secretariat of the Convention on the Conservation of Populations of European Bats (UNEP/EUROBATS).

"It also wouldn't change the current situation as the virus is currently being transmitted from person to person," Streit added.

A cull of bats could also affect the area's eco system as they are pollinators and distributors of a wide range of plant seeds.

The World Health Organization (WHO) said on Monday that it has now recorded more than 20,000 cases of Ebola, with at least 7,800 deaths since the first reported diagnosis in December 2013.

Since the UN Ebola mission was set up in September, the hope that its work would be over within 60 - 90 days has faded. The goal is now zero cases, however long it takes. The new head of the mission will be an African. (30.12.2014)

The Scottish government says a case of Ebola has been diagnosed in Glasgow. The patient is a female health care worker who had returned from Sierra Leone. (29.12.2014)

The battle against Ebola 'is far from over'

In a bid to curb the spread of the Ebola virus in Sierra Leone, the international humanitarian organization, Medecins Sans Frontieres (MSF), has opened new treatment centers in the capital Freetown and Magburaka. (22.12.2014)