Europe's hedgehog numbers in decline due to habitat loss

Hedgehogs are a common sight in gardens in some parts of Europe. But the first time Monika Thomas saw one was at a friend's medical practice, where a person had brought one in for treatment. Now she sees these tiny animals every day.

Thomas, who is trained in medicine, established a hedgehog sanctuary called Netzwerk Igel in 2006. It's a nonprofit association located in Wuppertal, Germany, that provides care, food and shelter for nearly 500 orphaned or wounded hedgehogs every year.

2022 is a year in which hedgehog populations in Europe appear to be in steep decline.

Hedgehogs are a 'vulnerable species'

There are indications that hedgehog populations are in decline in Germany, as well as other European countries. But statistics are scarce and experts say they can only estimate the true extent of the decline. 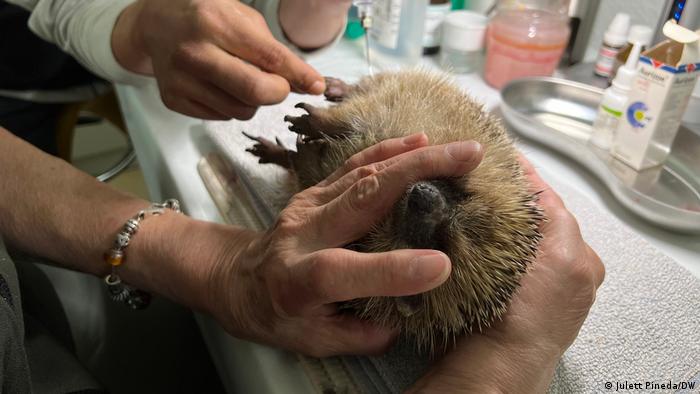 One sanctuary in France described hedgehogs as "the polar bear in our gardens" and said climate change was affecting their ability to find food.

In February 2021, a British conservationist group reported that the local countryside hedgehog population had shrunk by an average of 8.3% per year over the past two decades.

Another British report classified the species as "vulnerable to extinction."

There may be more than one reason for the decline in hedgehog populations, and that may be making the problem harder to address.

Carsten Schiller, who heads the German conservation group Pro Igel, lists the destruction of natural habitats among the top causes.

Erinaceus europaeus have lived on Earth for nearly 60 million years, making them one of the oldest surviving mammals. They tend to live in open landscapes.

But the expansion of monoculture — or single-crop — farming, the development of human settlements and the use of insecticides are said to be displacing hedgehogs from the foothills, grasslands and fields they typically inhabit.

"Based on the destruction of natural habitats by [human] activities, including soil sealing, we expect that the hedgehog population will reduce up to 50% in the span of a decade," said Schiller. 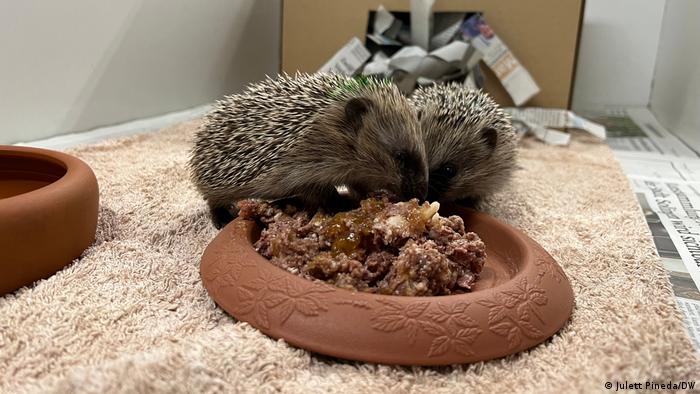 Hedgehogs feed off insects, and shouldn't be fed any food made for human consumption

Soil sealing is when porous ground is sealed by laying concrete, for instance. That cuts off access to food in the soil for many species, including hedgehogs.

When food is scarce, hedgehogs move from one territory to another. They can cover distances of up to 8 kilometers (5 miles) during a single night, the time of day when hedgehogs are most active.

Drought also affects hedgehogs as they feed on insects (they have an insectivore diet). "Because of drought, the soil gets very hard. The plants that [host] these insects tend to retreat into the ground," said Thomas.

Pesticides also kill insects and invertebrates that are part of a hedgehog's diet.

Hedgehogs are also exposed to multiple risks when changing territories. They can end up on busy roads or get bitten by a dog — these are some of the most common emergencies that Thomas sees at the sanctuary in Wuppertal.

Need for more statistics and resources

The conservationists said lack of data and poor funding are making it harder for them to tailor an appropriate response to the situation.

They called for more up-to-date statistics, but neither Germany nor any of its federal states have any historical data that could serve as a point of comparison for any monitoring conducted today.

Then there is the issue of funding. Another hedgehog sanctuary near Wuppertal had to close its doors after operating for 35 years, leaving Netzwerk Igel to receive more emergency cases than ever before.

Overworked and lacking sufficient resources, the sanctuary survives on donations and a helping hand from volunteers. "I'm only able to hire one person full time. We don't have any municipal support," said Thomas.

We can all help the hedgehogs

Despite the situation, Thomas says she remains positive: "I'm an optimist." 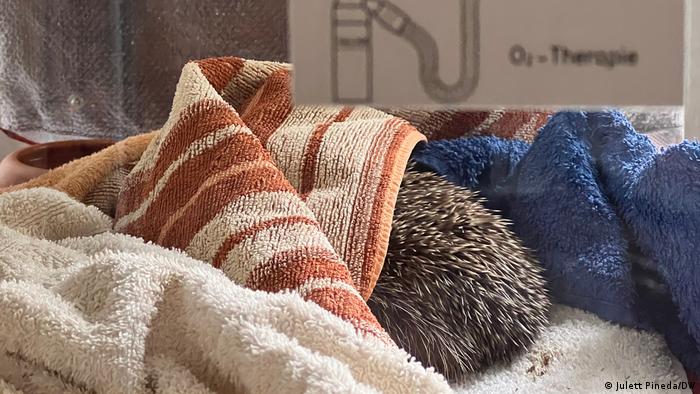 When hedgehogs are forced to leave their habitats in search of food, they often cross busy, dangerous roads

"The conservation of our native species relates to the preservation and creation of natural habitats," he said.

But we can all help the hedgehogs. If you see a hedgehog during the daytime, it's likely that this nocturnal animal is hurt or vulnerable.

So if you find a hedgehog during the day, contact a local sanctuary or a conservationist group. They will know if it's an emergency and act accordingly.

But be mindful of the fact that hedgehogs cannot eat human food. They require an insectivore diet, and human foods in large quantities or over long periods can harm them, Schiller explained.

Most of the emergencies received by Igel Netzwerk arrive during the summertime. This happens because hedgehogs often seek refuge in residential backyards. But this is also a time when people like to mow their lawns.

Thomas recommends leaving some of your lawn to grow wild, so that hedgehogs can make a nest. And take a look at the yard before mowing it, to see if you have any hedgehogs living there, especially if you use a robot lawnmower, as these tools can hurt them.

This hedgehog 'hospital' is saving hundreds of lives

A sanctuary in western Germany is the temporary home of over a hundred hedgehogs. Hedgehogs are endangered by the loss of habitat. Volunteers work around the clock so orphaned and wounded animals can return to nature.