European perspectives on the German vote | Europe | News and current affairs from around the continent | DW | 23.09.2013

Europe paid close attention to the vote in Germany. Correspondents from across Europe believe that whoever will govern in Berlin will have a major impact on politics in the entire eurozone. 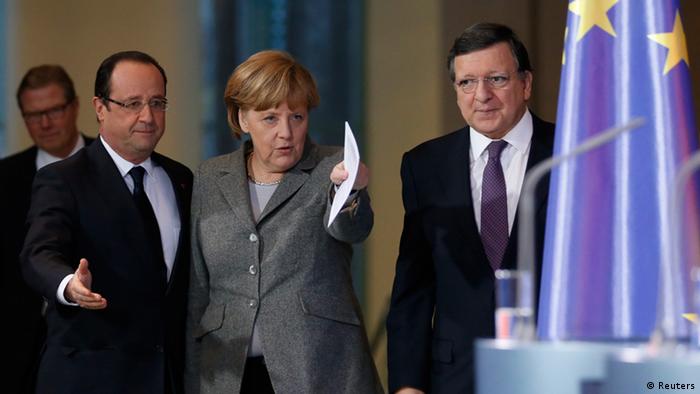 “France's socialist president, Francois Hollande scarcely expected a victory by Germany's Social Democrats (SPD). For him, the best solution now would be a grand coalition in Berlin. France hopes for more consumerism and spending in Germany and a softening of Berlin’s position with regards to growth policy in Europe. But whichever government is formed, Paris expects the Franco-German relationship to get easier. French media and public opinion have paid very close attention to the campaigns. As Angela Merkel embodies the German success, she's appreciated as head of government. If the French had voted in the German polls, they would have also given her a majority. But the option of a grand coalition surprises the French. In France, the differences between the political left and right are much wider. In Paris, a grand coalition would be impossible.”

“A grand coalition would be a good scenario for Greece, according to leading TV station Mega Channel. This is what representatives of the Greek Finance Ministry are said to have confirmed to the channel. The rise of the euro-skeptic AfD party though is giving many Greek journalists a headache. Mega Channel is describing the party as “right-wing extremist.” Tassous Teloglou of STAR Channel also views the likely grand coalition as positive for Greece, as the Social Democrats traditionally "are in favor of strengthening the domestic demand" - which would work in favor of the struggling countries of southern Europe.

"The channel's Brussels correspondent, Thanos Athanassiou, believes that now the way could be free for a recapitalization of Greek banks through EU rescue mechanisms. Never has a vote in Germany been followed so closely. "Germany votes and Europe waits," was the leading paper Kathimerini's headline on election day. Some concerns were raised that the new government in Berlin might drop crisis-stricken Greece, But Germany’s Hans-Gert Pättering, a former president of the EU parliament, tried to calm things down. He told Kathimerini that Berlin would remain on the side of Greece."

“The German election was followed with a lot of interest in Italy - just like everywhere else in Europe: media, politicians but also the person in the street wanted to know how and by whom Germany would be governed. They know that a lot of what will happen in Italy will not or not only be decided in Rome but also in Brussels and in Berlin. And, while maybe not to the same extent as in Greece, there's also a sense in Italy that it is Germany that's responsible for the harsh austerity programs that have stifled the economy and led to an increase in unemployment. There's been social tension in the past months, accompanied by populism that - thank God - didn't last long.

"There is no anti-German sentiment in Italy, but certainly there are voices critical of Berlin. Of any possible coalitions, a grand coalition is seen as the best option for Europe and Italy. The focus would then be more on growth than on austerity and that would provide oxygen for the economy. All politicians agree though that the reform and austerity efforts would remain in place. If commentators here are to be believed, the next Merkel government would put more stress on growth anyway. And that's something that's being eagerly awaited in Italy."

“Unlike in many other European countries, Angela Merkel is very popular in Poland; she tops the list of most important foreign politicians. You can assume that her election victory will be seen as something positive by most people in Poland. For the current government it's certainly good news. It's not a secret that Donald Tusk has a very good relationship with Angela Merkel which for him is an advantage with regards to his goals in Europe. The elections in Germany have had a lot of attention in Poland, and many radio and TV channels had special election coverage on Sunday night. In light of how little foreign news there normally is, this is something quite special."

“A grand coalition would make this vote the most boring one since the end of the Second World War. On the other hand though, it looks as if there has been some movement on the political fringes in Germany. Should the FDP be replaced by the euro-skeptic conservative AfD, this would be a positive development: it would mean that some of the so-called 'angry citizens' would be represented in parliament. The disadvantage however would be that it would be the beginning of a volatile phase in German democracy. Had Merkel achieved an absolute majority though, the most important country at the center of Europe would be governed by one single political party. This would cause concern for Germany and the rest of Europe.”

While some in Germany may have been suprised by the election result, there was little attention coming from the US. Germany- and Europe-watchers had expected her to remain in power anyway. (23.09.2013)