Germany's Euro 2020 ended with a defeat in London against England. For Joachim Löw, the end of the tournament also meant the end of his career as head coach. 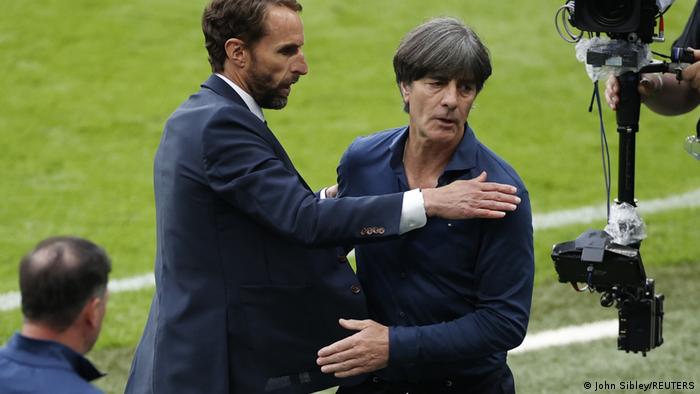 Gareth Southgate got the better of Joachim Löw on Tuesday

Joachim Löw's last tournament as Germany's coach ended not with a bang but with a whimper as England overcame their demons to finally beat Germany in a big knockout game.

As tense as this fixture was — and for long periods it was on a knife-edge — perhaps the most telling aspect was that, despite having two head coaches at different ends of the experience scale, both spent more time trying not to lose rather than looking to win it.

Afterward, Löw, who announced in May his intention to retire after Euro 2020, could only lament the missed opportunity that his Germany side had had to make one last tournament run.

"It's a huge disappointment for us," Löw told German public broadcaster ARD. "We had hoped for more and the belief was there. But, in such games, it's important to use the few chances you have."

Though playing Germany carries traumatic baggage for England and their fans, this fixture is a matchup that has historically favored Germany. The Germans hardly ever lose to England in major tournaments, their last such defeat coming at the 1966 World Cup final. And despite Germany's own inconsistencies and a raucous home crowd, this Euro 2020 round-of-16 clash was no different.

But, besides England’s fans booing throughout Germany's anthem and Germany's longer spells of possession, and cheering when the big screen showed a little girl in a Germany shirt crying, it was not Wembley's intimidating atmosphere that left Germany dazed and confused but rather their inability to find out how to win the game. 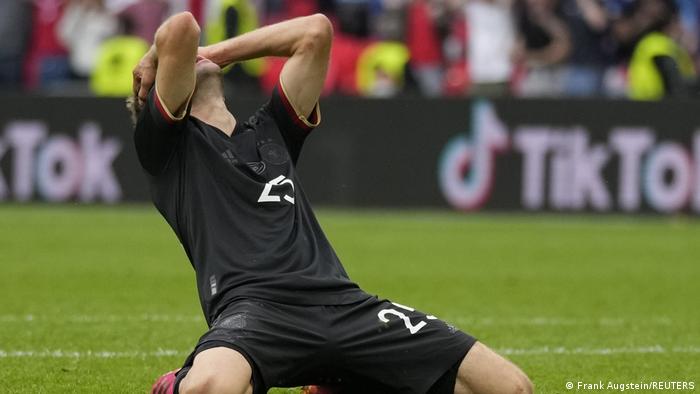 Germany rued many missed chances in their loss to England

Had Timo Werner shown more composure, Kai Havertz not been denied by a great save by Jordan Pickford and Thomas Müller not fired wide late on, this might have been a different evening for Germany. But this is a German team unable to escape their inconsistency, and the hard truth is that it has been for a while, long before England got the better of them.

Löw conservative as game slipped away

Outside of half-chances and long-range efforts, the game grew into a sparring match without anyone willing to trade blows. "No mistakes, no second chances," is what Löw told ARD before kickoff, and both teams seemed distinctly aware of it.

For a team whose weakness are at set pieces, Germany were clumsy in giving away so many opportunities. By halftime alone, Germany had a dominant Mats Hummels, who twice denied Harry Kane the chance to score, to thank that they hadn't conceded.

Löw's attempt to play on the break and make the most of those transitional moments looked good at the start of both halves. But for a side with more shots, more of the ball, and nearly 100 more passes, they struggled to move the ball quickly enough, often enough. This Germany side has shown that it is only ruthless and clinical when the opposition invites them to be.

When space did open up, Germany were unable to take advantage. At one point, Werner was unable to keep control of the ball as another attack broke down. Löw ran towards his bench in frustration, gesticulating wildly. If he could sense it slipping away, he was too late to stop it falling through his fingers.

His substitutions were tardy and surprisingly conservative. Wembley's was not a crowd to be silenced, but it was one to be turned frustrated and anxious. Both Germany and Löw missed the chance to do that. 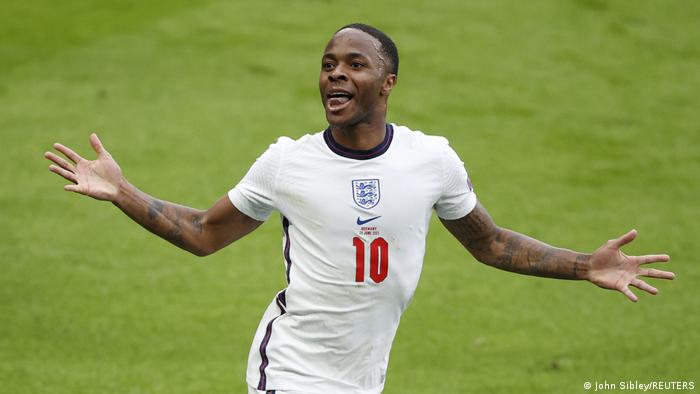 Raheem Sterling scored the decisive goal for England, his third of Euro 2020

England didn't miss their chance to turn hope into belief. Raheem Sterling finally opened the scoring from close range, and Harry Kane put the game out of reach shortly thereafter.

In the end, Germany were left hoping that a free kick might work or a Hummels pass with the outside of his boot would find someone. It was desperate. In Russia, Germany got the better of Sweden but looked a side beyond recognition. Against England three years later, Germany were exactly who we thought they were and the result wasn't on their side.

Löw has been hanging by the occasional result for a long while, but he's a man who has always had time. At Wembley, England ended that time with a bang.

Löw bows out as Germany coach with Euro loss

Go to page two to relive the action...