EU to Provide 7,000 Troops to UN Force in Lebanon

European nations pledged up to 7,000 troops Friday to form the core of a beefed-up peacekeeping mission in Lebanon capable of enforcing the fragile truce between Israel and Hezbollah, officials said. 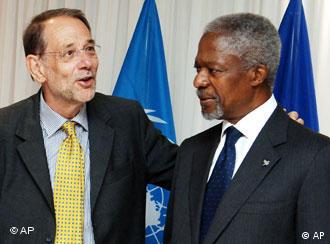 The pledges account for more than half the extra soldiers needed to bring the UN Interim Force in Lebanon (UNIFIL) up to a maximum mandated strength of 15,000, from its current count of 2,000.

UN chief Kofi Annan, speaking after a meeting with foreign ministers of the 25 European Union states, hailed the conference "a success."

"We may have a unique opportunity to transform the cessation of hostilities into a durable ceasefire," he added in Brussels.

The pledges came after France, which currently commands UNIFIL, committed itself late Thursday to a total deployment of 2,000 soldiers.

But French President Jacques Chirac, who was speaking separately Friday in Paris, said a level of 15,000 troops was "excessive" and it made "no sense" to have such a large contingent alongside the Lebanese army in the region. 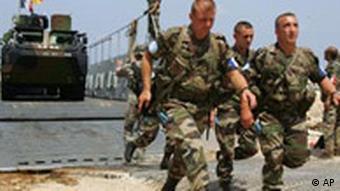 In Brussels though, Finnish Foreign Minister Erkki Tuomioja, whose country holds the rotating EU presidency, said the total European contribution would be "something between 5,600 and 6,900" soldiers, as well as air and naval assets.

French Foreign Minister Philippe Douste-Blazy put the EU deployment at "6,500 to 7,000 soldiers on the ground, which means that the spinal column of the reinforced UNIFIL will be European."

The force is crucial to shoring up UN Resolution 1701, which on August 14 brought an end to the 34-day conflict in Lebanon between Israel and Hezbollah militants.

Annan said Bangladesh, Malaysia and Indonesia had offered to participate in UNIFIL -- though Israel has opposed contributions from those Muslim countries because of an absence of diplomatic relations.

The UN chief also proposed that France see out its current term as commander of the force, which expires at the end of January, after which Italy would take over. Italy is expected to supply up to 3,000 soldiers, which would make it the biggest contributor to the force.

France, though, played a key role diplomatically in revamping the force, having co-authored the UN resolution with the United States. It also enjoys close relations with Lebanon, a former protectorate. Douste-Blazy said France had "absolutely" no problem with the change of command. 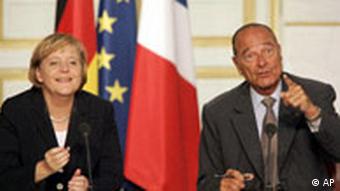 Jacques Chirac, right, and Angela Merkel during a press conference in Paris on Friday

Chirac's announcement that he was sending 1,600 more troops to Lebanon came after international criticism over his initial, emergency deployment of just 200 soldiers to join the 200 already in UNIFIL.

A vanguard of 170 French reinforcements arrived in Lebanon on Friday, making France the only country so far to have actually sent troops. Chirac said he agreed to send the extra two battalions after winning a robust mandate for UNIFIL and guarantees the force would be able to cope if hostilities flare up again.

"I wonder how it would have been judged if I had raced off like a mad dog without thinking or securing minimum guarantees," he said in Paris.

He also questioned the goal of boosting the force to 15,000 soldiers, calling that "a totally excessive figure" given Lebanon's relatively small size.

The announcement of the French reinforcements spurred some of the other EU countries into firming up previously vague promises to contribute.

Spain was said to be ready to send 1,000 to 1,200 soldiers, substantially more than the 800 initially cited in media reports.

Belgian Foreign Minister Guy Verhofstadt said his country would provide 300 soldiers by late September or early October, with the possibility of adding nearly 100 more later. "Peace in the Middle East is an absolute necessity," he said. 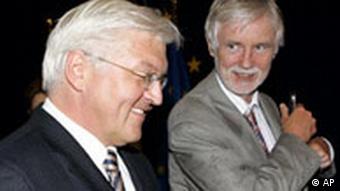 Britain's Europe Minister Geoff Hoon said that while his country's military -- heavily deployed in Iraq and Afghanistan -- was too stretched to send ground troops, it might supply "specialized" units.

Other countries, notably Greece and Latvia, have also indicated they could send soldiers, but no details were provided Friday.

Germany, wary of potential confrontations with Israelis because of its Nazi past, is prepared to offer naval units, not troops, as is Sweden.

The force is also to help Lebanon halt arms smuggling to Hezbollah over the border with Syria, considered a main sponsor of the Lebanese militia, if Beirut requests.

Syria is concerned at the deployment of foreign troops in Lebanon -- from which it was forced to withdraw its soldiers last year under UN pressure led by France -- and has cut power supplies to its neighbor and warned it may close the border.

French Troops Arrive in Lebanon as Part of UNIFIL Deployment

Following an initial deployment of engineers, more French troops arrived in Lebanon Friday as part of the pledged 2,000-strong contingent which would form part of a UN force to maintain the current ceasefire. (Aug. 25, 2006)