The European Union has signed a landmark free trade deal with Vietnam. With concerns from some lawmakers about the country's human rights record, the agreement needs approval from the European Parliament. 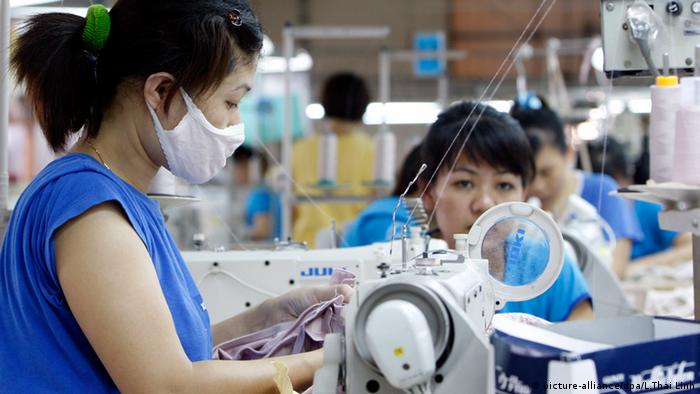 The European Union on Sunday signed the EU-Vietnam Free Trade Agreement (EVFTA), paving the way for tariff reductions on 99% of goods between the 28-member bloc and the Southeast Asian country.

European Union Trade Commissioner Cecilia Malmstrom and Vietnam's Minister of Industry and Trade Tran Tuan Anh signed the EVFTA in Hanoi on Sunday, three and a half years after negotiations ended in December 2015.

The agreement still needs to be ratified by the European Parliament. Some EU lawmakers oppose such deals with Vietnam because of the country's poor human rights record.

Vietnam has one of the fastest-growing economies in Southeast Asia. Backed by robust exports and foreign investment, the country has already signed several free trade pacts, including an 11-country deal known as the Comprehensive and Progressive Agreement for Trans-Pacific Partnership (CPTPP).

The EU is Vietnam's second-largest export market after the United States, with main exports including garment and footwear products. In 2018, Vietnam exported $42.5 billion (€37.32 billion) worth of goods and services to the EU, while the value of imports from the region reached $13.8 billion (€12.12 billion), according to official data.

As a result of the agreement, clothes, shoes and smartphones may soon get cheaper in the EU, while almost all tariffs will disappear. The free trade deal shows what an economic transition Vietnam has made.

Experts say that Vietnam is also benefiting from an ongoing trade war between China and the US, as major companies are moving their production to Vietnam to avoid the US penalties.

Rights organizations have been trying to persuade the EU not to sign the free trade deal with Vietnam due to severe human rights violations and curbs on free speech in the country. They argue that the EU should not have signed the deal without Vietnamese authorities having taken measures to improve the rights situation in the country.

Earlier in June, climate activist Nguyen Ngoc Anh was sentenced to six years in prison for a series of "anti-state" Facebook posts. Human Rights campaigners said this was part of an "ongoing crackdown" on dissent.

The EU also condemned the arrest, calling it a "worrying development."