The UK's prime minister is preparing to head back to the EU in a bid to renegotiate key parts of her Brexit deal. But Brussels has said the deal "is not open for renegotiation," paving the way for a head-on collision. 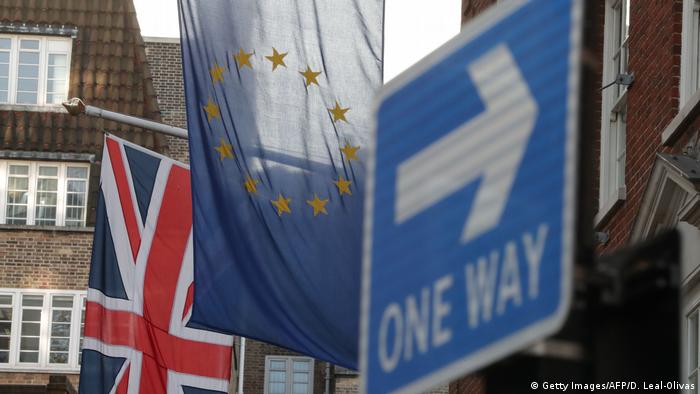 European leaders stood firm late Tuesday after the British parliament voted to send Prime Minister Theresa May back to Brussels to renegotiate the EU-backed withdrawal agreement.

"We continue to urge the UK government to clarify its intentions with respect to the next steps as soon as possible," said a spokesman for European Council President Donald Tusk.

Tusk's spokesman was referring to the Irish border backstop, a measure included in the draft Brexit deal to prevent a hard border between the Republic of Ireland and the UK's Northern Ireland.

"The Withdrawal Agreement is and remains the best and only way to ensure an orderly withdrawal of the United Kingdom from the European Union."

Despite Brussels' repeated assertions that there is no room for fresh negotiations, the British parliament on Tuesday voted in favor of an amendment that sees May heading to Brussels to find an "alternative arrangement" to the Irish backstop.

The backstop would keep Northern Ireland (and by extension the UK) in the EU customs union in order to avoid a hard border on the island of Ireland.

May, who backed the demands in a major policy shift on the deal, said there was "limited appetite" in the EU to renegotiate parts of the draft accord.

"It won't be easy," May said. "But in contrast to a fortnight ago, this house has made it clear what it needs to approve the withdrawal agreement."

Since May's government secured the deal with the EU last year, she has had trouble selling it to British lawmakers, including several in her own party. Earlier this month, the UK parliament shot down the deal with nearly two-thirds voting against it.

German Foreign Minister Heiko Mass said that Britain must come up with concrete proposals over the Irish border.

What the British envision changing in the backstop is so far unclear, he said.

"On the issue of the backstop Germany and the entire EU are on Ireland's side," he told the Funke Media Group. "We will not allow Ireland to be isolated on this issue."

Roderich Kiesewetter, a foreign affairs lawmaker from Chancellor Angela Merkel's Christian Democrats, said that Theresa May was "under pressure," and that the UK was taking the "wrong approach."

"We have another eight weeks and we should really avoid a hard Brexit," he said. "We should invest all our energy to keep a kind of tarif and customs union and nothing else. There will be no further room of maneuver."

"It's clear that we won't accept a militarized border in Ireland," he said. That was always the EU's position and it is not in British interests either."

In Ireland, officials have warned that a hard border on the island would undermine the Good Friday Agreement, which ended decades of sectarian violence. As such, the Irish government made clear that the draft deal "is not open for renegotiation."

Irish Foreign Minister Simon Coveney doubled down on the EU's position, saying: "We hope (the backstop) will never be used, or be replaced quickly by a future relationship agreement. But it is necessary and tonight's developments at Westminster do nothing to change this."

May has pledged to renegotiate the deal or head back to parliament to vote for a new way forward on February 13. But some say it could be too little, too late, with the March 29 Brexit deadline inching closer without a deal in sight.

The EU's preferred option is for Britain to stay. Failing that, Brussels would like the UK to remain as close as possible. For now, though, Europe's leaders just want some clarity on what the British government wants. (21.01.2019)